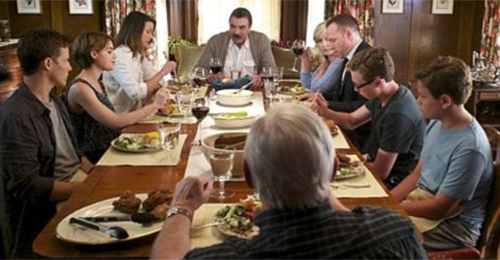 Tonight on CBS Blue Bloods continues with an all new Friday May 6, season 6 finale called, “Blowback.” and we have your weekly recap below. On tonight’s episode, in the Season 6 finale, public outrage erupts when a cop isn’t indicted for shooting a teenager, and the fallout affects Frank, (Tom Selleck)  the mayor and Erin’s (Bridget Moynahan) office.

On the last episode, when a key eyewitness in a murder trial flees out of fear of retaliation, Erin and Anthony spearhead their own two-person manhunt to find him and convince him to testify.

On tonight’s episode as per the CBS synopsis, “in the Season 6 finale, public outrage erupts when a cop isn’t indicted for shooting a teenager, and the fallout affects Frank, the mayor and Erin’s office. Later, an officer gets shot in a possible case of retaliation, so Danny searches for the shooter.”

Blue Bloods “Blowback” airs tonight at 10:00 pm ET and we will be live blogging all the details. So don’t forget to come back and refresh your screen often for live updates.

Was it the act of one rogue cop or was the shooting of a teenager justified? That was the question on tonight’s episode of “Blue Bloods”.

Apparently Jamie and Jenko had gotten called to a site where one young officer claimed to have seen two young men matching the description of suspects in an armed robbery. So all three officers approached the men as best as they could and they had identified themselves as police officers even as they were forced to chase the suspect. However, Jamie and Jenko went after one guy while their fellow officer followed the other. And so neither Jamie nor Jenko knew there was anything wrong until they heard gunshots ring out.

That’s when Jamie told Jenko to stay with the perp they managed to arrest while he went to go see what happened with Officer Russell. And what happened was that the officer had shot the second suspect at point blank range though there were a lot of mitigating factors surrounding that one action. Such as the fact the suspect had been armed when he had been shot and that he had failed to drop his weapon despite being asked to on multiple occasions. Yet, things were rapidly overlooked in face of the other fact that no one could deny which was that the suspect did have his hands in the air. As if he was surrendering.

So that begged the question why. Why did Officer Eric Russell shoot Diego Perez? Diego had been seventeen when he died, but he had been found with stolen items on him that proved he was involved in a string of armed robberies and that he could have used his knife on Officer Eric Russell. At any given time.

But in a time where racial tensions were at an all-out high, it didn’t matter that Russell was black while the teenager he shot dead was a Latino. What mattered was that the city then took sides and most of everyone that weren’t in blue chose to believe that Diego had been executed. So the case was eventually passed off to the District Attorney’s office and at first they too had wondered what to do however they soon made up their minds about taking the evidence in front of a grand jury. That way it would be the grand jury’s decision on whether or not Officer Russell should be indicted on charges.

And, you know what, they decided that there wasn’t anything proven much less shown on the body cam admitted into evidence that Russell had intentionally set out to hurt young Diego Perez. Though sadly the city wasn’t quite satisfied with those results. So there was some blowback from what the grand jury had decided and it wasn’t helped when someone later leaked the footage of Officer Russell’s body cam. Or that Mayor Poole decided to follow that up by issuing a statement where he said he was going to be putting together an independent investigation into what really happened on the day in question.

Such comments implied that the Mayor no longer trusted either the police department or the District Attorney’s office to get justice done. And unfortunately it also added fuel to the fire. The city had been tense enough without Mayor Poole’s statements that almost justified that there was something off with the shooting. So it wasn’t all that surprising that there was a later revenge shooting.

Two officers had been parked inside of their car when someone just ran up and shot at them on a busy street. Yet, despite plenty of witness literally within touching distance, not a single person came forward to admit they saw anything. And so an entire neighborhood had chosen to side with the shooter rather than his victim because his victim was a cop. So a lot of NYPD then came to see the Mayor’s actions as instigation.

Including Frank of all people. Frank had been waylaid by the press after he had gone to the hospital to see Officer Hayes and he implied if not right out told them that he believed the leaked body cam came from the Mayor’s office. Who he also implied had taken undue interest in Diego Perez’s case and who could therefore no longer be impartial.

Though, technically no one was impartial. The Reagan family were divided on what happened to Diego Perez. The officers in the family felt like that had been a clean shooting seeing as Diego had continued to approach Officer Russell with the weapon in his hands yet on the other side of the argument were Nicky and even Danny’s wife Linda. Who felt like there should have been a third option besides the officer putting his own life in jeopardy or shooting dead a teenager.

So the family couldn’t even agree on what happened much less on what should happen next. However, Erin did tell her father that he had been wrong about the mayor leaking the video because it had been someone inside her own office that had done so. ADA Marta Avila had taken it upon herself to release the video because she thought their office hadn’t given the grand jury the full picture. Like how Diego’s family claimed he barely understood English.

Only it was Marta in the wrong because Diego’s own partner had said Diego understood English and the body cam had revealed that Diego stopped running because he had heard Officer Russelll shout that. So the only thing Diego supposedly hadn’t heard was the part about dropping his knife which could have been wishful thinking rather than the system out to get another Latino man. So former Ada Marta was eventually fired from the office and she’s looking at charges brought up for what she did as well as disbarment.

But funnily enough it was only Frank that would later humble himself. His department had gone on to capture the shooter in the near cop killing and so it part of his prerogative to the Mayor’s office about that however Frank also wanted to apologize for practically accusing the mayor for releasing the body cam footage. He knew that he had made unnecessary assumptions and that shouldn’t have blamed the other man for what happened to Officer Hayes. So he was willing to apologize as well as resign.

And yet Mayor Poole didn’t want Frank to quit. In fact, he mentioned that maybe he should be the one to leave office seeing as he had made bad situation worse what with his comments. So the only reason that Mayor Poole hadn’t resign was because Frank had talked him out of it. He said that if both believed they could still work together then they should try it out before either one of them resigns.