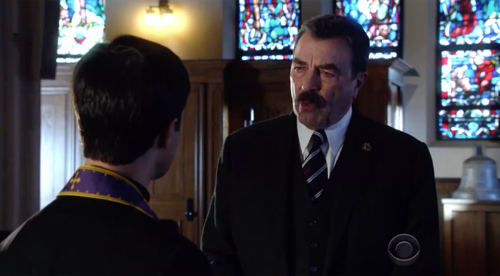 Tonight on CBS their hit drama starring Tom Selleck Blue Bloods airs with an all-new Friday, November 18, 2016, episode and we have your Blue Bloods recap below. On tonight’s Blue Blood Season 7 episode 9, as per the CBS synopsis, “Frank (Frank Reagan) is left with minimal information to find a missing boy when a conflicted priest who could help won’t break the seal of confession. Also, Danny (Donnie Wahlberg) and Baez (Marisa Ramirez) investigate the death of a prominent New York City socialite with a secret life.”

Jamie had gone out of town for a wedding on tonight’s episode of “Blue Bloods” and he had had surprisingly going with Eddie. But they were just going as partners. Jamie had apparently asked her because he couldn’t go with anyone else and he had been very clear that they were going to the wedding as partners on the job. So Eddie had thought that was a little funny. Partners usually don’t go to a wedding together and so she had laughed at that however, she and Jamie have never been just partners. They have been friends and occasionally there were times when they thought they could be more.

However, Jamie had been careful to say that they were merely partners and then he had acted differently at the wedding. Jamie hadn’t wanted to relax or even dance with Eddie yet he hadn’t wanted her to dance with anyone else and that included the groom’s friend Derek. Derek had seemingly come on too strong for Jamie’s liking so he had warned the other guy off and that had come back to bit him. Derek wasn’t a man that would walk away after being embarrassed and so he mouthed off. He asked Jamie and Eddie how many NYPD officers it takes to change a light blub and then answered five. One to take it down and four others to smash up the only bulb.

So Jamie and Eddie had a problem with that joke. They had known what Derek was implying and had been offended though Eddie could ignore it and Jamie couldn’t. Jamie had told Derek that he must have a lot of time on his hands to think up that joke and then he went on to say that city cops actual did something besides writing up traffic tickets. Which was what Derek does because he was merely a police officer in one county. Yet, the green-eyed-monster did strike Jamie again at the actual wedding. Jamie had seen Derek dancing with Eddie and he cut between them though Derek had been upset by that.

Derek thought Jamie was acting wat out of line and so he tried to tell Jamie “hey ” as in what are you doing. Though Jamie had replied what are going to do about it and had then goaded the other man by asking him if he was going to write him a parking ticket. So Derek had had enough of Jamie’s attitude and he had punched Jamie, but that quickly turned into a giant brawl. Derek and Jamie went at it then several other wedding guests started and the brawl didn’t break up until after the wedding cake had been destroyed and the cops had been called. And so both Jamie and Eddie ended up getting arrested.

Thankfully, though, no one had wanted to press charges and they had all gotten quickly released. But Eddie had stopped in a joking mood by then and she had told Jamie that he started the fight. She had said that Jamie was always pretty clear that they were just partners, that nothing could happen between them, and then starts a fight with someone that is interested in her. So Eddie ditched Jamie before long and Jamie had been the one that was embarrassed. He knew that he hadn’t been fair to Eddie or even Derek for that matter so he tried to find a way to make it up to Eddie later and he had gone back to Queens.

However, Danny had seen an even uglier side of jealousy than what Jamie had displayed. Danny and his partner Baez had been working on a case involving the death of socialite and they had found out that the victim had also been a call girl. The victim who’s real name was Lindsey Wentworth had had everything in life. She had gone to the best schools, had a husband that adored and then she found out that she got certain high out of being a hooker. Lindsey had apparently slept with someone in Vegas and he had tried sliding her money because he thought she was a call girl so she slapped it for him yet she began thinking differently on the flight back to New York.

Lindsey had told her sister that the idea started to excite her once she thought about it and so she joined the Mile High Club with another stranger on the flight back home to her family. So Lindsey found a high society type of service and she quickly started her life as Kate though no one allegedly knew about it other than her sister and she had taken great pains to hide it from her husband. Lindsey had gotten a second phone, none of her profile picks for the service revealed her face, and she tried to hold onto her anonymity. Yet, somehow her husband had found out what she’d been doing and he had killed her for it.

So Danny had seen an uglier side though he made sure not to bring to that Sunday dinner meanwhile his brother was doing his walk of shame with a both an arrest and a shining black eye. Though their niece Nikki hadn’t mind that Jamie had gotten arrested. She had said that she now wasn’t the only one that ever spent time in lockup and so her family hadn’t to tell her their little secrets. Like how Danny had spent three hours in a cell when he was twelve because Frank thought he needed a lesson after skipping school, or that time Frank nearly missed spending time in a cell because the Marines had taken him to task for destroying a bar, or that Grandpa Henry had stood with his union brothers and had gotten arrested for it.

Erin however had tried to sit on a high horse when she said she had never spent time in prison. But Frank had told everyone that wasn’t true. Erin had spent time in a cell after she and her friends did every illegal possible on a public beach. Like public urination, skinny dipping, throwing a loud party, and public intoxication. So Erin had wanted to know how her father had found out about that so she asked her brother and he had swore that it hadn’t been him, And he had been right because it had actually been the Commanding Officer that had called Frank yet he had decided to let Erin stay in lockup to prove a point so that had shocked Erin.

She had said that she had been traumatized. However, Frank said that all kids turned out better for what they called his tough love. So Erin and Danny just had to live with their respective pasts and Jamie chose to do something about his. Jamie had asked Eddie to this upscale place and he finally gave her the dance she had wanted though they both felt that it would best to not define themselves at that moment in time so who knows what they now are. And, while Frank talked a lot of game, he had broken some rules that no one else would have.

Frank had led an archbishop to believe that he was investigating a priest in one of his parishes because of something involving a minor when really he had just wanted to get around the sacrament of confession. Father Phil had gone to Frank and had said he knew where he was a fifteen-year-old was being held because someone had confessed their sins to him, but that couldn’t say who or give a description. So Frank had gotten security cameras to see who was Father Phil’s last confession before coming to him and then he had acted as a police officer. However, archbishop had thought that Father Phil had broken confession and he was investigating to see if that’s what happened. And so Frank got a perfectly good priest in trouble.