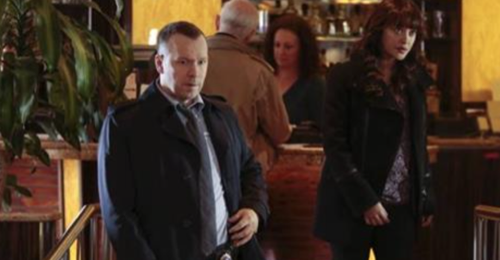 Tonight on CBS Blue Bloods continues with an all new Friday April 1, season 6 episode 18 called, “Town Without Pity.” and we have your weekly recap below. On tonight’s episode, Danny (Donnie Wahlberg) and Frank (Tom Selleck) team up on a case involving an ex-con who was rehabilitated, but who is now involved in a murder.

On the last episode, Jaime and Danny clashed over how to deal with a brash rookie cop who was the son of Danny’s pal. Did you watch the last episode? If you missed it we have you covered with a full and detailed recap right here for you.

On tonight’s episode as per the CBS synopsis, “Danny and Frank team up on a case involving an ex-con who was rehabilitated, but who is now involved in a murder. Elsewhere, Erin preps for a trial and discovers the alleged killer’s location is being kept secret by the former prosecutor of the case.”

Blue Bloods “Town Without Pity” airs tonight at 10:00 pm ET and we will be live blogging all the details. So don’t forget to come back and refresh your screen often for live updates.

Danny and his father the police commissioner had somehow ended up at cross purposes on tonight’s all new episode of “Blue Bloods”. Apparently a man that Frank had known well and had in fact testified for in order to get him released was being accused of a brand new murder yet Danny thought Nick Constantine was his guy while his father appeared to have had some doubts. Nick it seems had been one of Frank’s first collar so he had gotten know the man before he was released after twenty years. And as recently as a few days ago, Frank had been holding Nick up as the model ex-con.

Nick along with others had gone with Frank to do a forum on Offenders’ Notification. Which was an open platform where men around the table to talked to young offender that had just gotten out and was considered to be high risk with the potential to re-offend. So Nick had gone to that meeting and he told a young gang member that just served three and a half years that he had been looking at life when Frank decided to speak up for him.

And so it funnily had been Nick’s story that got to Tyrell the most. He had looked at the police commissioner as the man that did want to see him stay out of the prison and that developed respect if nothing else. But then the shooting happened. A shooting and a dead body had been reported afterwards at Nick’s son’s club and unfortunately security footage showed Nick fleeing the scene with a gun as if he was guilty.

So Frank first heard about the recent case when his people reported it to him in a panic. They said it looked bad for Frank. Frank had always shot down the mayor’s Fresh Start program which allowed non-violent offenders more leniency and to be out on the street as early as that afternoon yet his stance had always been that those men shouldn’t be trusted. Yet, a man that Frank did trust and who he went to bat for had been accused of murder.

And therefore Frank’s people wanted him to take a tough stance on Nick. They said Frank should approve of a basically a manhunt so that the city knew he was still tough on crime however Frank hadn’t wanted to do that. Frank said that they were acting without the facts so he wasn’t going to condemn a man until he had been proven guilty. With actual evidence rather than hearsay.

Which made things a tad awkward with his son Danny. Danny had later found Nick and Nick had had a weapon on him that turned out to match the murder weapon in his case. So he knew he had his man yet he also knew that it would as a come blow to his father. And therefore he had tried to keep Frank out of it as best as he could.

His father however had ended up beating him back to the station. Frank had heard about the gun so he should have been reasonable, but for some reason he had still wanted to believe in his old friend Nick and didn’t mind that it wasn’t looking good for him as the police commissioner to talk to a suspect before the man could even be properly questioned by the detective on the case. Like his own son.

So Danny hadn’t known what do with himself. Though Jamie went on to experience a similar situation because he too hadn’t known what to do next when he and his partner found the body of Harry Clarke. Harry had lived alone and it didn’t appear as if he had any friends much less a job yet thousands of dollars just lying around the apartment. And there had been no will or family coming to claim it.

Meaning Danny and even Jenko could have simply taken that money for themselves, but they were good cops. Therefore, they notified everyone they were supposed to and also called a woman by the name of Sandi Harper whose address had been on top of a letter that Harry had been trying to write so ultimately they had done their jobs. Only they didn’t know what to do about the money.

The city was technically supposed to claim it however Jamie wanted to give the money to Sandi. Sandi had been using the ten thousand dollars a month that Harry was sending her to put her grandson whose was autistic in a private school and so she relied on that money yet Jamie and Jenko had figured out where Harry had gotten his hands on that much cash. He had apparently been involved in a bank heist back in the day and Sandi’s husband who had been his inside guy had gotten killed that day.

But the other bank robbers have all died by now and the bank had gone under back in 2008. So the only way that Jamie could resolve the issue was by telling Sandi she had a couple of minutes to use Harry’s apartment to find a suit for him to where. And he advised to carefully for any moments that she would like to take with her.

In other words, he allowed her to take a chunk of money that no one was claiming and told Jenko that she could always report him if she liked though she didn’t think she should bother.

And when Frank did see the light about Nick, he had helped his son to get a confession. Nick’s son it seems had wanted to take the blame for the murder yet both Reagns knew that the one thing Nick cared about was family so they pretended to believe the son’s story which really hadn’t even been plausible. Though it got Nick to confess to the murder and finally end the charade before someone else got hurt.So Frank had been let down and luckily for him, that hadn’t impaired his relationship with Danny.
Yet, for Erin it had been different. She had had a friend who was once a respectable ADA, but Kathy had let her ego get the best of her and that had nearly caused a man that killed his wife to walk. So as Frank was finally opening his eyes, Erin had to Kathy that hers never should have been closed to begin with.