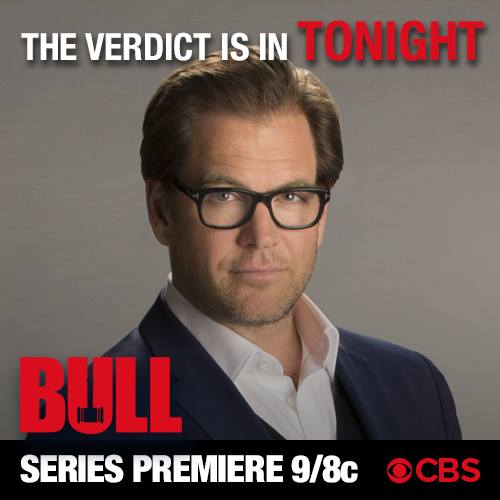 On tonight’s Bull premiere episode as per the CBS synopsis, “In high-stakes trials, Bull’s combination of remarkable insight into human nature, three Ph.D.’s and a top-notch staff creates winning strategies that tip the scales of justice in his clients’ favor.”

A body washes up on the shore in the Bahamas. A billionaire’s son is being hauled into custody with a smile on his face. Dr. Bull’s assistant welcomes the billionaire and a group of 5 lawyers. They meet Bull and his associates who are taking part of a mock hearing. Bull explains his skills and predictions about the jury, proving he is the man for the job.

Bull and his assistant, Marissa, talk about how they use a matrix of insane data that will tell them how the jury will vote. Bull’s assistant tells the billionaire what the public thinks of him – he’s a rich jerk. The billionaire’s lawyers question Bull’s strategy, but the billionaire doesn’t care – he wants Bull on the job.

Bull wants his teammate to bug the lawyer’s watch. His team mate is also his former brother-in-law. Bull returns the watch to the lawyer.

On to the jury selection – Bull and his Marissa sit in to watch as a member of the defense team. Back at the office, Marissa shows how she has mirrored the jury pool and how they work them in their favor. Bull sees one potential juror as a stumbling block. To see how she will vote and how to win her over, Bull wants to know what her entire life history is.

One of Bull’s team members meets up with a guy who knows information about the victim and why she was at the party. She finds out that the victim was moving fake Molly.

The victim’s mother is on the stand. She explains how her daughter comes from a family of divorce. How she liked Brandon, the suspect. They had sex but he wanted more. Bull is seeing what appears to be victims, who are talking to him, telling their side of what they think happened.

Brandon’s lawyer points out that the victim was a drug dealer. Maybe her mother didn’t know her well at all because she isn’t the good girl she is painting her out to be.

Bull meets with Brandon’s mother who is popping Xanax. Back at the lab, Brandon is going through witness prep with a member of Bull’s team.

Bull wants to talk with Brandon. He wants to know why he is smirking and acting like a dick. Bull wants him to call him Boss! Bull points out that 93% of communication is non-verbal. He asks him where he was when the vic was strangled. Brandon says that he didn’t do it, he didn’t leave his room, he was too messed up.

Bull and his team talk about the juror who is a risk. She doesn’t fit the analytics. One of his teammates brings him information about Brandon – he has pictures with bondage. The vic was strangled. He must have hooked up with 2 different girls the night the victim was killed.

Bull pays a visit to one of the girls Brandon hung out with, Taylor. Bull wants to talk to her but her dad won’t let him.

Taylor is on the stand. She is being questioned about how the victim was her drug dealer. He makes her read text messages she wrote to the vic and Brandon. She was jealous of their relationship. In one of the texts, Taylor says that the victim must die. When the lawyer pushes her further she hits him. The court room clears, going outside where a man with a gun fires shots.

Bull is visiting the billionaire in the hospital. He’s nervous about a retrial. What if his son is guilty? Bull asks him if his son will do what he tells him to do.

Marissa watched the mirror jury and shares that they are losing. It’s back to the one juror, who has a son looking for a father he never had. Meanwhile, his team is still bugging the lawyer who is meeting with the DA to plead guilty on Brandon’s behalf. Bull doesn’t want to do that so he meets with Brandon to talk about taking a plea deal.

Bull wants Brandon to be the man his father never was. He can relate to his father issues. Bull tells him that his father made a deal to put him in prison for 10 years. Bull wants the truth so that he can help him. Crying, Brandon thinks the jury won’t believe him.

Bull wants the female lawyer to deliver. It will work better for Brandon. Together, the team and Brandon run through how he has to answer questions and what to say.

Bull wants the female lawyer to finish out the closing argument. She talks about character. The jury convenes for the verdict – Brandon is found not guilty! It looks like Bull won over the juror. Bull tracks her down on the street corner. She noticed that he was watching the jury, watching her. She begs him to stop trying to figure people out, to stop asking questions – it’s a lonely place to be. She can see the pain in his eyes.

In the end, we see that it was Taylor’s mother who was the killer, thanks to Bull who read her right.