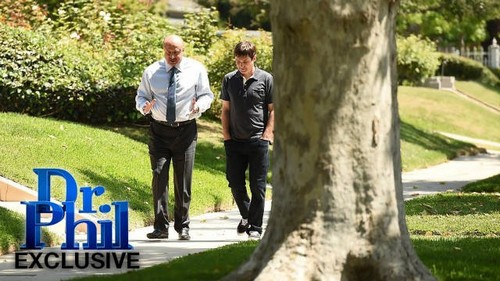 Speaking exclusively with In Touch, Dr. Phil revealed that Burke was questioned by investigators three times. “Once when [Burke] was 9, twice when he was 12 – those tapes disappeared. For the first time in 20 years, we’re going to hear from the other person that was in the house the night [JonBenet] was murdered. Dr. Phil will play the tapes during the three-part special with Burke Ramsey.

A photo of Dr. Phil and Burke was shared on Instagram. “After 20 years, it’s finally time for answers” the post reads, in part.

As Dr. Phil explores Burke Ramsey’s side of the story and plays tapes that mysteriously disappeared for 20 years, CBS prepares to air ‘The Case Of: JonBenet Ramsey.’ The six-hour docuseries will follow the original investigators as they work with new experts in an effort to solve the 20-year-old murder case.

The team of investigators has used a 50,000-square-foot warehouse to rebuild the Ramsey Home in Boulder, Colorado. Each floor has been recreated to the exact specifications as the Ramsey home was in 1990 when JonBenet was murdered.

In ‘The Case Of: JonBenet Ramsey’ promo the investigators discover new evidence that may lead to the truth about what really happened the night the child beauty pageant was killed.