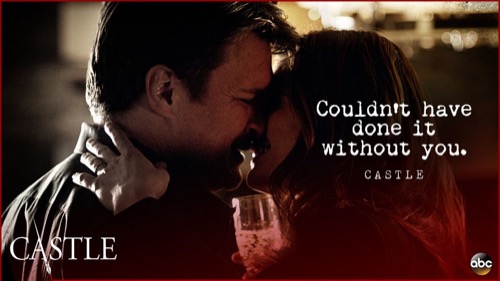 Tonight on ABC Castle starring Nathan Fillion continues with an all new Monday February 15, season 8 episode 11 called “Dead Red” and we have your weekly recap below. On tonight’s episode a Russian diplomat’s son is killed, leading Castle (Nathan Fillion) and Beckett (Stana Katic) to learn about international crime and foreign politics as Castle is tasked with keeping a Russian security officer busy.

On the last episode, Castle finally got his day in court when he takes the stand as the key witness to a murder from five months ago. But when new information suddenly arises, he and Beckett had to race against the clock to prevent a miscarriage of justice. Did you watch the last episode? If you missed it, we have a full and detailed recap right here for you.

On tonight’s episode as per ABC’s synopsis, “when the son of a Russian diplomat turns up murdered, Beckett and Castle find themselves in a dangerous game of international crime and punishment, with Castle having to entertain a jovial Russian security officer who winds up more involved than anyone planned.”

Tonight’s episode is going to be great so be sure to tune in to CASTLE on ABC at 10PM EST. We’ll be blogging all the action, be sure to hit up the comments and tell us how excited you are for season 8 episode 11. While you wait for the recap, check out a sneak peek of tonight’s episode below!

We see an English as a Second Language (ESL) student, Grigory, walking in a room and at first one of the doors is locked and then when he manages to open it, someone is there and slashes his throat.

Becket, Lanie and Ryan are on the scene of the crime when Esposito walks in, tells them a homeless guy heard a car burn rubber around 2am in the neighborhood.

Beckett goes to see the victim’s father, a very important Russian official. She asks the father, what was his son doing in the abandoned building. His father says that he hasn’t been the same since he lost his mother in a car accident and has been hanging around with a new crowd, the diplomats of New York City.

At the precinct, Castle is making Russian jokes when a guy who speaks Russian comes in and hugs him, says he loves his books. It turns out, the guy is a jovial Russian security officer named Vasili.

Esposito and Ryan interrogate a student, Uri, the prime suspect, while Beckett and the security officer watch. They tell him they know he sold drugs to the kid last night and killed him. The kid says that he only confesses that he is rich, furthermore he has diplomatic immunity and they have to ask his country to charge him, which they didn’t, he walks out.

Vasili and Castle meet Uri who was called into the precinct, he reminds them about diplomatic immunity. Vasili says there is Russian justice, he might wake up next week on the beach without his feet. The kid gives in; he says he dropped Grigory off at the building after they did a little business.

At the precinct, they found numbers from a stain on Grigory’s shirt, is a case number from his mother’s case, he obviously didn’t think it was an accident and it probably got him killed.

It turns out that Grigory was asking a lot of questions about his mother and her death. Castle and Becket go back to see his father, he claims his wife was having an affair and they both went their separate ways.

Ivan takes Castle into a top secret area which leads them to question Emily who demanded Grigory call her just before he died. She says that he was using her computer and she works with data storage company. Becket digs deep and finds out that Grigory’s mother was a Russian spy.

Becket wants Castle to keep Vasili busy while she, Ryan and Esposito do some further digging into his life. Castle suggest some sightseeing. Meanwhile, Becket finds out that Vasili is a dangerous man and if Castle gets in his way, he is going to be collateral damage.

Castle soon finds out that he is in danger, Vasili hand cuffs him to the car, gets out and kidnaps a man by gunpoint and puts him the trunk of the car.

Castle tells Vasili obviously he is not a happy go luck security guard. Vasili drives to what looks like a warehouse, handcuffs the man to a chair and starts to beat him while Castle watches in disbelief. Vasili tells Castle that he is a nice guy, so don’t make him do something to him too. Castle begs for sixty seconds, he tells the man to tell Vasili wants to know, the man won’t. Castle digs through the man’s pockets and searches for clues, figures out that he was making making fake ID’s to get someone into a Russian party.

At the party, Becket tells Vasili to get them in; he does and tells them to stay cool. All of a sudden, Becket sees a red light and Surgei gets shot. At the precinct, they have a murder weapon and are trying to get finger prints on it. The Russian consulate is blaming becket and the team because they say they distracted the crowd so Surgei would get shot.

Becket calls in Rita to speak to Vasili, she is uncover, furthermore she is Castle’s step mother but didn’t want to tell him because she wanted to protect him. Castle tells her that is old and all of a sudden that jars Becket’s thinking. Why would the sniper use an older weapon, from the 1980’s. Vasili tells her that it would have to be someone in the field who did it.

Rita is alone with Castle, he has questions but she pretty much tells him that she can’t tell him anything it is for his own safety.

Castle asks her if he is going to see her or his dad again and she says no, but she does tell him that his dad is really proud of him.

Ryan found something unbelievable, Grigory’s mother is in fact alive and well.

They call her into the precinct, Becket tells her that she and Frank are responsible for her son’s life ending. Anya says that if Becket didn’t interfere her husband would be dead now.

She claims her husband was a traitor and she has held her tongue because her husband is very well connected. Anya faked her death and Sergei killed Grigory, he was not his biological father. She says that the night of the part was her last chance to kill Sergei. Anya tells Becket that Sergei has diplomatic immunity.

Becket goes to see Sergei who is ready to leave the country, he gives her a message for his wife. Vasili is there, he is leaving town as well but tells Castle and Becket that he has a plan for Sergei, Russian justice.