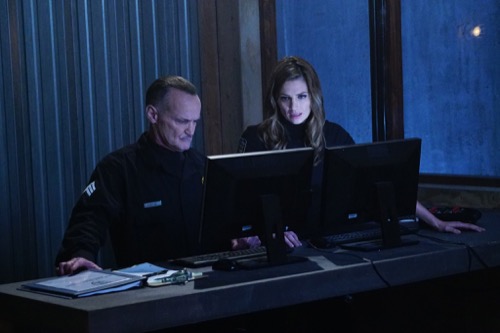 Tonight on ABC Castle starring Nathan Fillion continues with an all new Monday March 21, season 8 episode 15 called “Fidelis Ad Mortem” and we have your weekly recap below. On tonight’s episode the team head to the NYPD Academy for an investigation involving a murdered recruit.

On the last episode Castle returned to the City of Angels in search of answers about his missing time. But things took a deadly turn when he’s recruited by the legendary Greatest Detective Society to help solve a murder. Did you watch the last episode? If you missed it, we have a full and detailed recap right here for you.

On tonight’s episode as per ABC’s synopsis, “the team head to the NYPD Academy for an investigation involving a murdered recruit. Meanwhile, Castle grapples with a decision with far-reaching ramifications for himself and Beckett.”

Tonight’s episode is going to be great so be sure to tune in to CASTLE on ABC at 10PM EST. We’ll be blogging all the action, be sure to hit up the comments and tell us how excited you are for season 8 episode 15.

Tonight’s episode of Castle kicks off at a warehouse in the middle of the night – a gun shot rings out. A man is wounded and running for his life. Someone is chasing him in a trench coat. He puts away his gun and takes out a knife and prepares to finish him off.

The next morning, Castle surprises Beckett with breakfast and coffee. He tells Beckett that after work they need to “catch up” so that he can fill her in on what he learned in Los Angeles. Beckett and Castle are still trying to pretend that they aren’t together anymore. Castle’s mother Martha barges in and Beckett sneaks out the back. Martha wants to show Castle the book she just wrote called “Unsolicited Advice.”

Beckett heads to the crime scene, the man that was murdered last night at the warehouse on the docks named is Daniel Bardot. Lani fills Beckett in and reveals that after the killer shot Daniel, they took the time to cut the bullet out of him so that the gun couldn’t be traced. Ryan runs Bardot’s prints and learns that he is actually a member of the NYPD was at the police academy.

Castle, Ryan, and Espinoza head to the police academy. She sends them to check out Bardot’s dorm room – Beckett heads to the Commissioner’s office, he reveals that Bardot was an orphan, his parents were killed when he was 9 and he grew up in the Irish Mafia’s backyard. Seargent Ortiz says that during the last few days, Daniel was acting strangely. He told Ortiz that he had to “set something right” in his personal life.

Beckett gets a phone call from Lani – they got the ballistics back on the gun, and the gun that was used to kill Daniel Bardot is registered to the police academy. That means that one of the 14 people training with Daniel is the killer, and they have spent months learning how the NYPD catches murderers – so they know what to do so that they aren’t caught.

Beckett meets with Bardot’s training class – she gives them a speech about how to cope with losing your partners when you are officially a cop. Beckett uses the time to feel out the other recruits. Ortiz and Beckett don’t want word to get out that they are suspects. They decide to have them go through some drills to see if any of them are off their game. Meanwhile, Beckett finds a note in Bardot’s locker warning him to keep quiet because “dead men tell no tales.”

Espinoza and Ryan bring in a drug dealer named Arthur Stinson – apparently word on the streets is that he has been selling steroids to a dirty cop at the academy. Arthur says that he has never actually met the cop. He just receives notes from him on blue index cards telling him when to make the drop offs.

Beckett has narrowed her search for Bardot’s killer down to four suspects at the academy: Chambers, Decker, Lopez, and Takata. All four of them went to fight night at a local gym – and were off campus during Bardot’s murder. Any of them could have easily slipped out during the fight and killed Bardot. Beckett has a mock interrogation to see if any of them will crack. Chambers tries to make a run for it and dashes out of the class room – Espinoza and Ryan are waiting outside for him and cuff him and bring him in to custody.

At the precinct, Chambers confesses that he was selling steroids at the police academy. He swears that he didn’t kill Bardot and says that he did send him a note threatening him. Chambers has an alibi, he isn’t Bardot’s killer. He says that Bardot was blackmailing him and wanted $5000 to keep quiet about the drugs. He tells Beckett that she should go talk to Bardot’s girlfriend….Decker. She neglected to mention that she was dating the murder victim when she talked to Beckett earlier.

Meanwhile, Ryan and Espinoza get a break on the murder weapon, they find the gun stashed near by the murder scene. And, it has Bardot’s fingerprints on it. He was the one that stole the gun from the academy – but somehow the killer got a hold of it.

Beckett talks to Decker about her boyfriend. She swears she doesn’t know what Bardot was up to – but that he was acting strangely the last few nights and kept sneaking out of the academy and coming back smelling like fish. Beckett tells Ryan and Espinoza to search the local fish market for leads.

That night, Castle shows up at Beckett’s office. He can’t keep the secret any longer. He reveals to her what he found out in Los Angeles – that he knew about LokSat a year ago and he had his memories erased to protect Beckett. She doesn’t take the news well, but they don’t have any more time to talk because Espinoza barges in.

Espinoza just got a huge lead in Bardot’s case. They found street camera footage of him near the fish market – he met with Flanagan, a known Irish Mafia gang leader. Flanagan runs Hunt’s Point, where Bardot grew up. They think that Flanagan planted Bardot at the police academy as a mole and Bardot was apparently having second thoughts about it and it got him killed.

Beckett heads to work the next morning, Ryan and Espinoza have bad news, it looks like Flanagan might have more than one mole at the police academy. Apparently, he paid for Decker’s tuition. Beckett brings Decker in for questioning. She reveals that she is Flanagan’s daughter – she just found out. Flanagan was blackmailing her and told her if she wasn’t his mole, then he would out her as his daughter and she would be kicked out of the academy.

Bardot knew about Decker’s problem with Flanagan. It looks like he met with Flanagan to try and volunteer to be his mole in her place and it got him killed. Beckett convinces Decker to go undercover with a wire and try to get her dad to confess to killing Bardot. But, the plan goes a bit haywire when Decker goes offscript and pulls a gun on her dad. Decker gets her dad to talk – but he swears that he didn’t kill Bardot. According to Flanagan, after he met with Bardot, he left and drove off. He does say that it looks like someone in a black sedan was following him.

Ryan and Espinoza get to work on tracking down the black sedan – they run the plates and learn that it was one of the academy’s cars, and it is registered to Sgt. Ortiz. Beckett is with Ortiz when she gets the call from Ryan and Espinoza. Ortiz says that he hasn’t used that car in days – he lent it to Commissioner Malone. Malone arrives at the warehouse and opens fire on Beckett and Ortiz. He confesses that he shot and killed Bardot because Bardot hacked in to his computer and found out he was stealing money from the academy. A shootout ensues, and Ortiz is injured, but Beckett manages to outsmart Malone and brings him in to custody. Case closed!