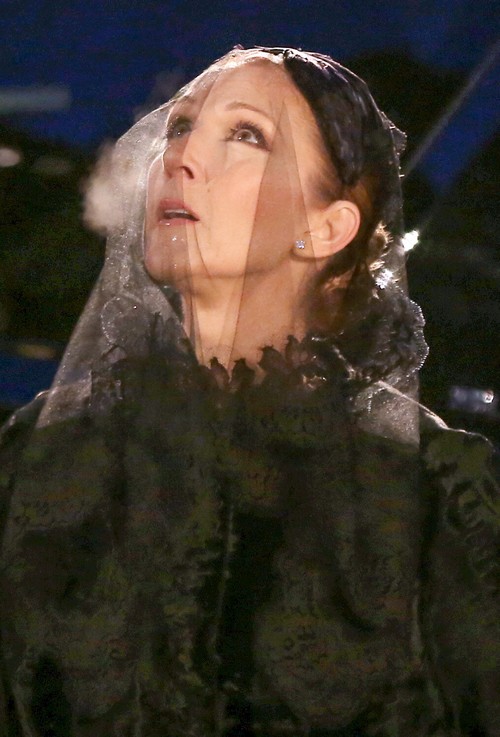 Celine Dion bade farewell to Rene Angelil during a state funeral at Notre-Dame Basilica. The couple’s eldest son Rene-Charles delivered a heartbreaking eulogy. A grieving Celine was escorted into the church by her three sons. Five-year-old twins Nelson and Eddy held tightly to Celine’s hands as Rene-Charles followed behind.

Celeine Dion was dressed entirely in black with a short veil covering her face. The three boys were dressed in black suits and ties. Nelson and Eddy wore black chapeaus.

Outside Notre-Dame barricades blocked off traffic and Canadian flags flew at half-mast on government buildings for Rene Angelil. Thousands gathered in the 27-degree weather along the streets nearby to show their support for Celine, Rene-Charles, Nelson and Eddy, as well as Rene’s children from previous marriages.

Inside the basilica mourners were each provided with a package of tissues and a funeral program which was written largely in French. “According to his wishes, all of Celine’s songs were chosen by Rene. Those include: ‘Trois Heures 20,’ ‘L’Amour Existe Encore’ and “All the Way’,” the program informed attendees.

As Rene-Charles delivered the eulogy in both French and English, Celine Dion looked on proudly, holding back tears. A small smile touched the teen’s face as he read, “Fifteen years is not a long time to get to know his father. You had a busy life, but we were communicating through golf, hockey, poker and smoked meat.” Celine Dion managed a small smile while Rene-Charles was speaking of time spent with his father.

Continuing his tribute, Rene-Charles’s voice broke, “You left me know with enough good memories of you to share with my younger brothers as they grow older without you being around. I’ll make sure to pass on what I’ve learned from you. You’re a tough act to follow.” In closing, Rene-Charles promised his deceased father, “Dad, I promise you here that we’re all going to live up to your standards.”

Rene Angelil is indeed a tough act to follow and his standards were quite high. The music mogul steered Celine’s career from the time she was 12-years-old, catapulting Dion into superstardom. Rene Angelil was the love of Celine Dion’s life and the singer with the golden voice may never find that kind of love again.

Our thoughts are with Celine, Rene-Charles, Nelson and Eddy at this difficult time. Leave your condolences below and come back to CDL for the latest celebrity news.