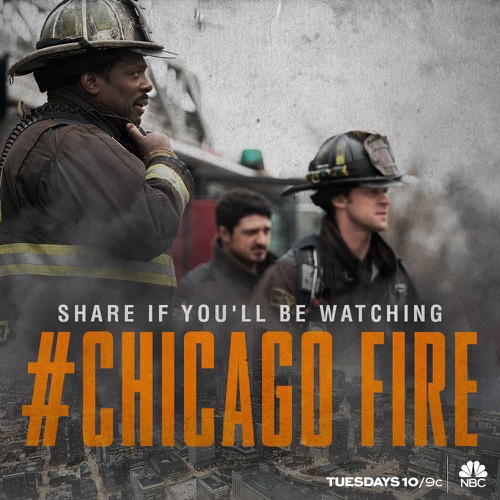 Tonight on NBC Chicago Fire returns with an all new Tuesday, April 26, season 4 episode 20 called, “The Last One For Mom” and we have your weekly recap below. On tonight’s episode, Severide (Taylor Kinney) watches Holloway’s (Jenny Mollen) young son while she testifies in court; the squad responds to a fire at an art gallery.

On the last episode, Casey became involved when a high-school student was the victim of a gang-retribution incident; Severide lended a hand to Det. Holloway, who was involved in an undercover operation, and watched her 9-year-old son at the firehouse; Brett and Jimmy were called to aid a woman who took a liking to Jimmy; Otis makes a surprising discovery; and Herrmann’s bar-running prowess was challenged. Did you watch the episode? If you missed it we have a full and detailed recap, right here for you.

On tonight’s episode as per the NBC synopsis, “Severide watches Holloway’s young son while she testifies in court; the squad responds to a fire at an art gallery; Casey receives a suspicious package in the mail; and Brett confronts Otis, who isn’t taking care of his important issues.”

Tonight’s season 4 episode 20 looks like it is going to be great and you won’t want to miss it, so be sure to tune in for our live coverage of NBC’s Chicago Fire. While you’re waiting sound off in the comments down below what you think of this season of Chicago Fire so far!

Cruz broke rank on tonight’s episode of “Chicago Fire” though it appears that decision didn’t come without consequences.

Apparently there had been a fire at the Native American Arts Gallery and the gallery itself had been a staple in Chicago for years. So when the Chicago Fire Department responded to the emergency call, they were told to get in and stay with the line. Only Cruz felt like he should break rank and ignore Severide’s orders to stay with the others in order to reach the one man that just thought he had to at least try to save the art. And so Cruz had to go out of his way to rescue one person even though the rest of his team at risk.

Cruz’s actions meant his team had to stay in the building for an additional two minutes when they could have been outside fighting that fire. So Cruz was later chewed out b Severide for breaking the line. However, Cruz still had to face even more repercussions when he got back to the firehouse and Chief Boden had taken him to task for what he had done. And therefore there came a point where Cruz felt like he had been embarrassed himself.

Though besides his reprimand, everyone else had promptly moved on. Detective Holloway had dropped off her son JJ at the firehouse because he wanted to interview the firefighters for his third grade project and she had to be in court anyways. So it had seemed like a good fit for a while. Until, that is, Severide had gotten word that JJ’s mother had been injured and that she didn’t want her son to know about her condition until after she had gotten out of surgery.

So the firehouse all came together to give JJ a good day and admittedly there were some close calls. Like JJ wanting to call his mother because he knew she always answers if she sees him calling. Yet the business of the firehouse kept others and most importantly Severide from having to lie to the young boy.

And so it would have better for everyone if that was only secret they had to keep. But Casey and Dawson kind of found themselves in a situation not of their making. Someone had sent Casey ten thousand dollars in cash and the two didn’t know if the money was a bribe or a possibly mistake. So they thought it best to just report it to Antonio and make the money someone else’s problem however some guy from the ethics committee eventually stopped by and he had asked Casey questions if front of the whole firehouse.

Al Nelson from the ethics committee didn’t seem to care that Casey had reported the money to CPD. He just accused Casey of sitting on money for days before he handing over to a friend of his that happens to work in Intelligence. So Al decided to report Casey and somehow turned the fact he handed over a bribe to the police into something dirtier than it was. And so Casey later had to call his new spin doctor (that Dawson had some misgivings about) to figure out how to handle the political crisis.

And she figured out that if they stop calling the money a bribe, but instead call it a donation to one the many charities Casey sponsor then people like Al Nelson couldn’t use this latest incident against him. So Casey’s was allowed to put the “situation” behind him and surprisingly it had made him think about his future. Namely in politics. Casey had downplayed the idea of running for mayor or possibly governor in front of Dawson. Though it appears that he has seriously thought about it and that’s where he’s leaning.

But Severide had been told some devastating news. The Chief had told him that Detective Bianca Holloway died in surgery because she had gone into distress on the table. So Severide had to sit on what he knew until JJ’s aunt came to pick him. And JJ recently had told him that his mother had a thing for Severide so that made the secret a lot harder to hold onto.

Only Severide did manage to keep his promise and he didn’t have to be the one to break the news because JJ’s aunt did arrive to tell him about his mother. Yet the whole thing had broken just about everyone’s heart at the fire station. So they later thought it would be best if the station’s dog went home with JJ for a while. JJ had needed something in his life that made him happy and he had grown quite attached to Pouch. And so Severide for one felt a lot better knowing that JJ would now have Pouch to look after him.

However, before they disbanded for the day, Cruz went and put up a gift the Native Americans had given him because they as well as Stella had made him realize that he had done the right thing when he saved that man’s life. He hadn’t followed procedures yet out there it wasn’t always so black and white. And his gut had helped make a decision that he could live with.