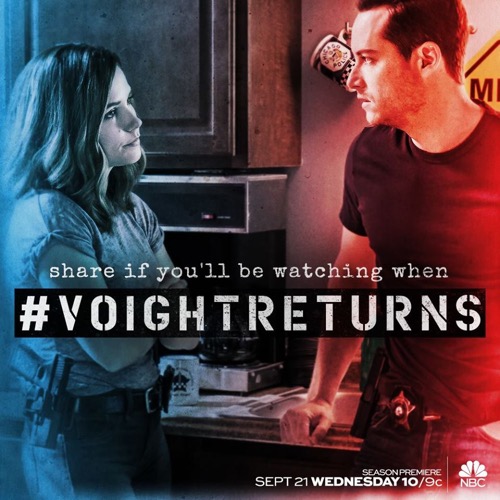 Tonight on NBC their drama Chicago PD returns with and all new Wednesday, September 21, 2016, season 4 premiere episode and we have your Chicago PD recap below. On tonight’s Chicago PD recap, In the Season 4 premiere, the team investigates a murder in which the victim appears to have been wearing a CPD-issued wire; Burgess (Marina Squerciati) works a case with a new partner; and Crowley (Barbara Eve Harris) questions Lindsay (Sophia Bush) about the night that Intelligence pursued Justin’s killer.

On Chicago PD’s season 3 finale, we were left to mourn with Sergeant Hank Voight (Jason Beghe) and Detective Erin Lindsay (Sophia Bush), who is not only a police officer, but the girl Hank took away from a drug addict and raised as his own, alongside his son Justin (Josh Segarra).  After Voight learns that Justin is not going to make it, he becomes a “mad man” with unfinished business.

Chicago P.D.’s Hank Voight went on a mission to find the person who killed Justin, and at this point it didn’t matter whether it was done legally or not.  He no longer was a cop, now he was a father whose son just died.  He sent his team to the wrong location, so they couldn’t be held accountable for what he was about to do.

Chicago PD’s Erin Lindsay, who was raised by Hank and his wife, knew better and tracked down Hank, forcing the murderer to dig his own grave.  Erin tries to convince Voight to not do this and that Justin wouldn’t want this, but he sends her away and we are left wondering if he actually took the shot, and finished the burial.

Chicago PD’s season 4 begins with Hank Voight standing over Justin’s grave, remembering the last moments he spent with his son, daughter-in-law and grandson at his grandson’s birthday party.  One of Voight’s buddies had told him that he had seen Justin in town a month earlier, and when Hank confronted his son, Justin admitted he was there to help a friend; who we now know was the single mother whose murder started this whole investigation.

Chicago PD’s Dt. Erin Lindsay bolts up in her bed from hearing the sounds of gun shots causing her boyfriend, Dt. Jay Halstead (Jesse Lee Soffer) to question what is going on.  Erin leaves the house and meets with Commander Crowley (Barbara Eve Harris), who tells Erin that the Intelligence Unit was being tracked the night Justin died, and it gave them a location where Erin and Voight were at.  She asks Erin how long she will continue to protect Voight, and that she needs to protect herself.  Erin walks away.

Chicago Fire appears in the episode when there is a burnt out car, Lt. Casey (Jesse Spencer) offers his condolences to Hank Voight, as the Intelligence Unit arrives on the crime scene.  Casey tells the Dt. Halstead that it was definitely arson, but there is an issue because it looks like the victim in the burnt out car is wearing a police wire.

Shortly upon arriving at the scene, the father, Mr. Burner shows up after tracking his son’s phone, and it is confirmed that the victim is his son.  Dt. Halstead and Dt. Antonio Dawson (Jon Seda) bring the father to the station and ask him if there is any possibility that his son would be wearing a police wire.  He says there was no way.

At the same time, Officer Kim Burgess (Marina Squerciati) is inquiring who her new partner will be, now that Sean Roman (Brian Geraghty) had quit; in walks her new partner, Officer Julia Tay (Li Jun Li).  CPD’s Burgess and Tay, right away come upon a scene where a woman has been severely beaten and they try to stop the driver, but he escapes and they bring the woman, Kate to Chicago Med.  The woman told them that the man was supposed to be a uBer driver.

The irony is that shortly before taking the emergency call, Burgess was questioning her new partner’s old job about ticketing officers outside the courthouse.  It turns out that Officer Tay’s previous position proves helpful to the investigation as she noticed the tags on the vehicle.  They were definitely not state issued and if they were, it was a car just purchased at an auction!

While Chicago PD’s Dt. Halstead and Dt. Alvin Olinsky (Elias Koteas) were searching the deceased man’s room, his sister Aly and father approached the room.  Halstead asked her some questions and she seemed hesitant and a bit hostile towards them, which they took note of.  When Voight gathers the team and asks where they are in the investigation, Halstead announces they are going back to speak to the sister.  Do you think she knows something about the police wire, or who her brother was recording?

Chicago PD’s Hank Voight repeatedly comes to Erin Lindsay, and tells her if she needs to talk, she can come to him about anything.  Do you think she will?  Did he in fact, kill Justin’s murderer, or did he do the right thing?

Chicago PD’s Hank Voight continues to monitor Erin, and notices that she is getting calls on her cell phone that she isn’t answering.  When Craig Gurwitch (Samuel Hunt) tells Voight that Commander Crowley is on the phone holding, Voight avoids her too and tells him to take a message.

CPD Detectives Halstead and Olinsky go to see Ally Burner at her brother Evan’s, who openly admits that she told her brother Evan that there is a police officer in the drug unit who is threatening her, she was caught dealing drugs by a school and she was looking at prison time.  Evan agreed to wear the police wire to save his sister.

When Dt. Halstead and Lindsay meet with Officer Reechy, she makes all kinds of excuses and that she was cutting corners to bring up her arrest and activity rate up and claims she didn’t even know that Evan was dead.  Lindsay snaps on the officer, telling her that she is pathetic for threatening a child over a “dime bag”.  Reechy has nothing good to say to Lindsay, especially since Lindsay works for Hank Voight’s Unit.

Chicago PD’s Hank Voight is thrown for a loop when he comes home to his daughter-in-law, Olive is all packed up and moving away with his grandson.  He begs her not to go, but she says she has to because all she sees is Justin or what caused his death.  A car honks, and she takes her son and leaves.

Dawson and Atwater (LaRoyce Hawkins) are tracking drug dealer Connor Wicks and Atwater admits that Head Quarters asked him to talk to Dawson about the night Justin was killed.  Dawson shuts him down.  They find a number the dealer was calling and they trace it to Lindsay.  Lindsay is up to her neck with stress, and when she confides in Halstead, he tells her to move in with him.  There will always be other jobs and other bosses, but he doesn’t want to love her.

Mr. Burner comes in after his son, Evan’s funeral and speaks to Voight, who tells him to keep it together and they will find the killer.  Will Hank be able to keep everything together, as this seems all to similar Justin’s death?  Voight goes to see the son of the man who murdered Evan, and asks Nikki if she ever wants to see her son again.  She agrees to be wired to catch the drug dealer she is living with.

Nikki meets with Connor and she tells him she never agreed to this.  Connor tells her, that if it makes her feel any better, the kid was dead before he burned him.  Connor wonders why she is asking so many questions and realizes she is wearing a wire.  He tries to flee, but is caught quickly.

Burgess and Tay are at Chicago Med and they start sharing their stories and how Tay ended up writing the tickets, and that it was Platt (Amy Morton) who got her working with Burgess.  As they are talking, Tay remembered seeing a decal that was on the vehicle that got away and they decide to follow her hunch.  They end up being right, and after a body shop owner lied to them, they find out who owned the vehicle and capture the guy.

Chicago PD’s Commander Crowley arrives on scene and asks Sgt, Voight to go with them, and asks for his gun.  Although he doesn’t leave in handcuffs, you know something is about to happen, and it doesn’t look good.  They drive Voight to where he was last seen, where he ordered Erin to leave.  The commander tells him to stop playing these games and just tell her the truth about what he did that night.  Voight asks her, “Do you have a kid commander?  No?  If you did, you’d hold him in your arms with the blood coming out of his head from a gunshot wound.  We wouldn’t be standing here right now!”

Instead of responding, she tells her team, “to dig it up!”  The team digs and digs, but there is nothing there.  Commander Crowley congratulates Voight, and he asks if he can go back to work now.  He is given his gun back and leaves the scene.

Officer Burgess and Officer Tay are able to go to Chicago Med and deliver the good news to their assault victim, Kate.  When she positively identifies the man and asks if they are going to arrest him now. Kim Burgess confirms that, “We already got his ass!”  As they are leaving the hospital, the Commander who put Tay on the worst police job ever wishes her good luck.  After he leaves, she runs in the other direction.  Is he going to continue to cause her problems now that she is at Precinct 21?

Chicago PD’s Detectives Olinsky and Ruzek are able to go to the Burner home and deliver some good news to the family.  They may not have been able to save Evan’s life, but they were able to capture and arrest the drug dealer who did it.  Olinsky says it’s nice that they sometimes get to share good news with people, and that it’s a blessing!

The episode ends with Voight showing up at Lindsay’s door.  She opens it and they both share an awkward silence before Voight says, “Thank you.”  Lindsay responds, “You have saved my life, I would have been dead at 15 if you hadn’t taken me in, there’s no doubt in my mind about that.  And there never was to saving yours.”  Voight stands in her doorway for a moment, then starts to walks away. He comes back with tears in his eyes and says, “You are all I have left now.”  Lindsay holds him in her arms.

So what happened to the guy who killed Justin?  Was it Erin Lindsay who killed him, and that is why she has nightmares of gunshots?  We will have to wait for next week to see what happens.  Be sure to tune into NBC’s Chicago PD on Wednesday, September 28, 2016, and check back often for updates, news, rumors and spoilers!!