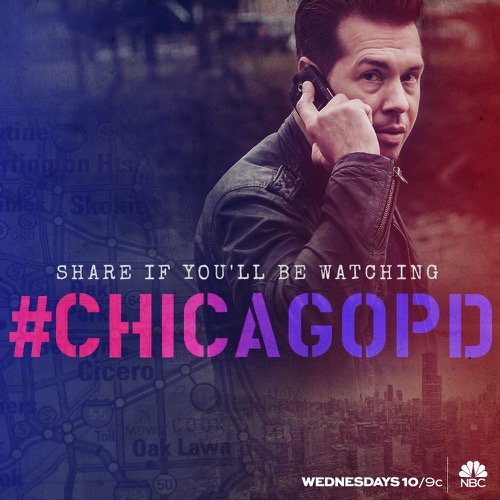 Tonight on NBC their riveting police drama Chicago PD continues with an all new Wednesday May 11, season 3 episode 21 called, “Justice” and we have your weekly recap below. On tonight’s episode, Burgess (Marina Squerciati) gives chase after Roman (Brian Geraghty) is wounded by a hooded perp who opened fire on their patrol car and shoots who she thinks is the suspect.

On the last episode, the team investigated when an abandoned newborn baby was found dead. In other events, Voight was surprised to learn that his son is in town; and Burgess and Roman grew closer.

On tonight’s episode as per the NBC synopsis, “Burgess is on trial after shooting an unidentified man who she believes shot her partner. After a hooded man open fires on their patrol car, Roman (Brian Geraghty) is left wounded and Burgess (Marina Squerciati) takes off after the shooter, briefly losing sight of him, and shoots when she relocates him turning in her direction with a glimmer of silver in his hand.”

Tonight’s episode of Chicago PD kicks off with Burgess and Roman on the night shift. They’re sitting in their patrol car in the dark, parked on a side street, and flirting with each other and making plans for after work. While they are giggling, someone in a black hoodie walks up to the car and shoots at them through the window. Burgess ducks but Roman is shot.

Burgess jumps out of the car and chases the shooter down a dark alley. She spots someone in a black hoodie walking in the dark and she shoots him and then tackles him in a mud puddle. Burgess screams at him for shooting Roman while she handcuffs. The kid insists that he didn’t shoot anyone.
The ambulance arrives, with Hank and his team. Hank warns Burgess that they can’t find the gun – the kid must have stashed it somewhere. Burgess swears that it was the same kid. Roman is rushed to the hospital, he lost a lot of blood, they spring in to action at Chicago Med when he arrives.

Meanwhile, back at the police station, Antonio briefs Hank on the shooter – Michael Vance Ellis. He’s 17 years old and has no priors. His parents are respectable citizens, his father is a plumber and his mother is a bank teller. Hank is helping Burgess with her statement, he tells her she has to memorize it before they turn it in, so nothing she says can be twisted.

Assistant District Attorney Peter Stone arrives to investigate the shooting. Stone says that his people are already talking to the victim, he wants all complaint reports that were ever filed on Burgess and Roman. Hank insists that it was a clean shoot – but Stone doesn’t want to hear it.

Erin and Jay head to the hospital to talk to Michael’s parents, he’s still in surgery. Michael’s mom sobs that there is no way her son did this, he is on the honor roll. His father says that Michael didn’t even have access to a gun. Michael wakes up from surgery, talks to Peter Stone’s team and he says that he saw a guy running with a gun and he slipped in to a building, then Ruzek came around the corner and shot him. Michael shouts that Burgess shot the wrong guy, and now he might never be able to walk again.

Peter pays Hank a visit at his office. He is skeptical – Peter says that there are too many cracks in the case to press charges and Michael is free to go home. Hank is furious, Pete says that someone is going to get charged, he just doesn’t know if it is going to be Michael or Burgess. Meanwhile, Trudy has to strip Burgess of her gun and badge, she is no longer a member of Chicago PD until further notice.

Stone’s team gets to work questioning Michael’s friends and family. They meet a kid named Kelton that worked at the grocery store with him. Kelton says that the day of the shooting Michael was acting agitated at work. He was supposedly ranting about how “out of control” the Chicago PD was.

Meanwhile, Ruzek is on the case – Michael deleted his Instagram account the day before the shooting. But, his girlfriend posted a photo of Michael on Instagram holding a gun, obviously not everyone is being honest.

A guy calls the Chicago PD, he says that he had a security camera pointed towards his car on the street, and he caught some of the shooting on camera. Olinsky and Atwater head to his house to get the security footage. In the security camera footage, it shows Michael clearly throwing the gun in to the water as he is shot. They send divers in to the river, and they recover the gun.

The city is up in arms over the shooting, and protesting right outside of the police station. The protestors freak out when Stone announces that Michael has been indicted for the attempted murder of Burgess and Roman.

Just because they have indicted Michael, doesn’t mean that the case is a slam dunk. The city of Chicago is on Michael’s side, they need more motive to get a jury to convict him. Meanwhile, Peter Stone is furious when he gets back security tape footage of Burgess and Roman in their car and he realizes that they are sleeping together. He calls Burgess in to his office and shouts at her that she is making it very hard for him to defend her.

The next day they head to court – Peter Stone brings along the Instagram photo of Michael holding the same kind of gun that shot Roman, and the security video of the gun flying in to the river while he was shot. Michael has an impressive attorney on his side, and she is not making Stone’s job easy. Stone’s boss is pressuring him to drop the case, the city is freaking out and it doesn’t look like he can win, Stone insists that he has it under control.

Burgess takes the stand, Michael’s lawyer has a field day with her and shows the jury the photos of Burgess and Roman making out in the cop car. There is good news though – Peter’s team finally found a motive. Dewan Motley, Michael’s Uncle, was assaulted and arrested at the exact location where Burgess and Roman were shot at four years ago by the Chicago PD. One of the officers are still in a coma from the scuffle. Dewan was sentenced to life in prison, and he hung himself and committed suicide in jail.

Peter reads Dewan Motley’s file – he pays Trudy a visit and wants to talk to her off the record. He asks her about Ed Braymer, the arresting officer the night that Deawn was arrested. He shows Trudy the photos of Dewan, he has two black eyes and his head is bleeding. Trudy confesses that Ed was racist.

Michael tells a compelling story in court – he cries to the jury and says that he has never even shot a gun. He explains that he saw his friends with a gun at a party and took a photo with it to impress his girlfriend. Stone takes the floor and reveals that Dewan Motley committed suicide two days before Roman was shot, Peter shouts at Michael and asked if he went down to the old scene of the crime to get revenge on the cops – Michael breaks down in court and starts crying.

The jury has been out for three days. Peter’s boss pressures him to cut a deal with Michael and instead of attempted murder, he will plead guilty to assault and battery – he could get out of prison in 4 years. Peter visits Roman and Burgess to see how they feel about it. Roman is furious – he thinks it’s ridiculous that someone who tried to kill two cops will only go to jail for 4 years. He finally agrees to the deal for the city – they need to put this matter behind them, the protestors are getting out of control and Chicago needs some peace.