Chris Brown Released on Bail After Arrest and Drug Testing: Tossed Bag of Guns and Drugs To Cops 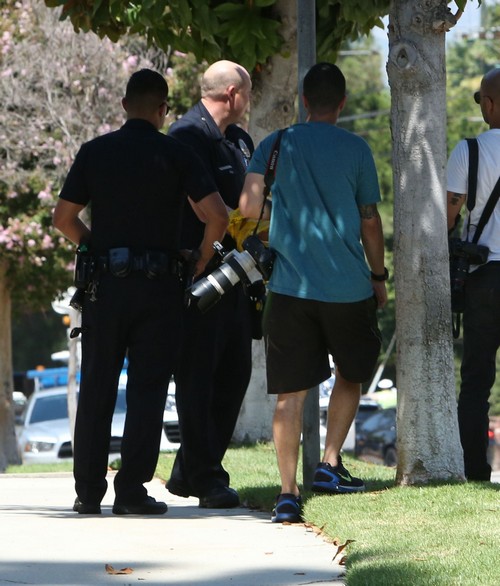 After a nearly 14-hour standoff with the Los Angeles Police Department, singer Chris Brown was arrested and, after a few hours in jail, posted bail. Chris Brown has posted $250,000 bail this morning, following a dramatic 14-hour standoff with police that led to his eventual arrest. While in Jail Chris Brown’s blood was taken and tested for drugs – considering drugs were found in the bag Chris tossed to police the chances of a positive test result are high.

The trouble started early Tuesday morning, August 30, when Baylee Curran, Miss California Regional 2016, called the police and stated that Brown had pulled a gun on her while she was a guest in his home. Baylee Curran alleges that she was admiring one of his necklaces when suddenly the singer went berserk, pointed a gun at her and told her to leave the premises.

She also told police that he appeared to be under the influence of drugs or alcohol at the time. TMZ has since reported that Baylee Curran has a criminal history of theft stemming from an incident in 2013 at The Plaza in NYC where she stole a designer handbag. Brown’s defense team will undoubtedly use this history to attempt to prove that Curran was attempting to steal the necklace when he pulled a gun.

Following her report, the LAPD showed up at Chris Brown’s house around 3:00 a.m. and the singer locked himself inside his mansion, refusing to come out or let police in. A standoff ensued while police were waiting for a search warrant.

Chris Brown decided to be productive with his time and post rants on social media where his (alleged) drug-induced feelings of persecution reached epic heights, culminating in his cringe-worthy mention of the Black Lives Matter movement: apparently, the distinction between racial persecution and legitimate probable cause is lost on Brown, who fancied himself some sort of martyr for BLM.

Once the singer stumbled off of his soap box of delusion, he completely lost his mind and threw a duffel bag full of weapons and drugs out of the window to the police and said, like any totally sober and completely rational person would, “Come and get me.”

Chris Brown’s considerable criminal history of violence, particularly violence against women, should make this an airtight case and result in significant jail time. But, this is the LAPD we are talking about and he is famous so… more court-ordered anger management classes, a round of rehab and a public apology will probably be a sufficient punishment for the serial domestic violence offender.

Will this finally be the end of Chris Brown’s career or will we all be further subjected to his misogynistic reign of terror in the future? Sound off in the comments below!

LAPD police units outside of singer Chris Brown’s residence in Los Angeles, California on August 30, 2016. It’s being reported that the police came to the residence with a warrant after a female claimed Chris pointed a gun at her. Chris was holding himself inside the house and refusing to come out but after a couple of hours he has since come out and turned himself in without incident. Chris has also posted a couple of Instagram videos claiming, he didn’t do anything and F**k the police! FameFlynet