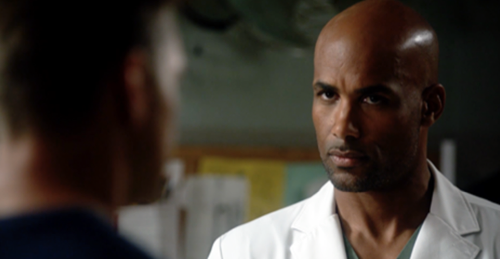 Tonight on CBS Code Black airs with an all new Wednesday, October 5, season 1 episode 2 called,  “Life and Limb,” and we have your weekly recap below! On tonight’s episode, season 1 episode 2 a patient’s hesitation to share that she’s transgender makes it difficult for the doctors to diagnose her severe abdominal pain.

On the last Code Black episode, Colonel Ethan Willis (Rob Lowe) joined the team at Angels Memorial from the Department of Defense and took Dr. Mike Leighton on a harrowing helicopter ride to save shark bite victims in Malibu.

On tonight’s Code Black episode as per the CBS synopsis, “Willis must help a promising young soccer player make a life-altering decision after he’s seriously injured when a bus carrying his entire team crashes, and another patient’s hesitation to share that she’s transgender makes it difficult for the doctors to diagnose her severe abdominal pain.”

It was all hands on deck in the emergency room when a school bus became involved a nasty car accident on tonight’s episode of “Code Black” however Angus had been scared about leaving his brother’s hospital room. Even for a dire emergency. Angus had seemingly spent most of his free time with Mike and he was beginning to believe that Mike was making strives in recovery. So he had told his friends that Mike was now moving his hand. But they hadn’t been particularly about that because they knew it could be meaningless and told Angus that he shouldn’t get his hopes up.

However, he wanted to get his hopes up. Angus wanted to believe that his brother was going to make a full recovery and come out of his coma. So he was reluctant to leave him in case there were other signs of improvement that his friends couldn’t ignore yet the hospital was getting overrun with teenage kids. The school bus had been carrying a High School soccer team and unfortunately there were more injuries than the hospital had in resources. And so the others couldn’t wait around to see if Mike moved his hands some more, they had to go down to the floor.

The floor though had become a battle zone. Dr. Willis had wanted the doctors to call their patients’ death in before they were ready and he was increasingly getting on everyone’s nerves with his sometimes bullying tactics. Yet, Willis didn’t scare some of the older doctors like he did the younger ones. So Rorish was able to talk to him and tell him to take it down a notch. The first year that he had tried to demean in front of everyone had graduated at the top of her class and it turns out she had been about the patient she was treating.

She had said that she checked her patient thoroughly and that what Holden was suffering from hadn’t been a mistake on her part. Holden had simply had something wrong that hadn’t showed up on any of his initial scans or even his previous surgery. Though the kid could still live a long life if he had his leg amputated. So they informed Holden’s father that his son needed to get the leg cut off and he had been more worried about his son losing his ability to play soccer than he was about his son possibly losing his life.

But Mr. Paxton was eventually able to see the doctor’s point of view and he had agreed to the second surgery if it could save his son. So the only person that stood in the way of the surgery had been the young man, himself. Holden hadn’t wanted to lose his leg and he believed that he could find someone out there that could save leg however there was no saving it because every minute without surgery meant an increased risk that he would become septic. So Willis had gone back to the father and told him that he needed to stand up to his kid.

Only Mr. Paxton didn’t want to. He said that that his son would always see him as the man that took his leg if he forced him to have surgery and so Mr. Paxton had hoped that the doctors at the hospital could be the ones that convince his son to have the surgery. So the surgery ended up coming down to whether Willis the jerk. However, Willis did have a heart under his tough exterior and he was able to talk to Holden as a person and not as someone throwing a tantrum so he did talk Holden into having the surgery.

The surgery, though, had been tough on Holden. He had needed someone with him to see his leg for the first time afterwards and he hadn’t wanted it to be his father. Yet, Charlotte wasn’t supposed to be around him and she sure shouldn’t have been about to tell him that she had unfortunately played a part in him losing his leg. Charlotte had done everything that Willis had asked her to do and in hindsight she realized she hadn’t done more than what was asked. So Charlotte was going to apologize to Holden when her new friend at the hospital kept her from making a mistake.

Though Charlotte case wasn’t the only one that felt they messed up. Willis felt guilty and he later got some of his army buddies to come down and show Holden how far prosthetics has come. So he had showed the young man that his future wasn’t over just because he lost his leg and Holden like any other teenager would have had thought it would be cool to a robotic body part. And so there was nothing to feel guilty about in Charlotte’s case and Rorish for one wasn’t guilty about the case she had overseen.

Rorish and Malaya had gotten one of the drivers from the accident itself and they had found amphetamines in his system. So the driver they had was technically at fault for accident because he had been on something and had driven into school bus’s lane. But Rorish had told the driver’s wife who had been by his bedside the whole time that he hadn’t been guilty for causing the accident. And that they hadn’t found anything in the tox screen. Malaya had thought that was dishonest however Rorish thought she was giving the wife something to hang onto. Even if it wasn’t going to last.

Angus however had brought two brothers together after he reunited them in the ER and that had made him think about his own situation. He knew that the odds were against him and Mike only he didn’t want to give up. He felt that his brother would eventually come back to him so he hadn’t thought all that hard about Mike’s actual condition and he hadn’t want his friend to tell him to give up. Though surprisingly Mario wasn’t on Angus’s back anymore about what the hand moving could mean.

Mario had run into his father in the ER and apparently he remembered his father differently. The older man was now dying from years of alcoholism and he was still the nasty as well as bitter man that Mario remembered. So Mario didn’t really care to judge anyone about their family because he knew that he didn’t want to be judged about his dad. Mario and Sugar simply focused on their trans patient that hadn’t told her girlfriend that she was born a man and finished out their day with a better understanding of the situation than when they entered the hospital.