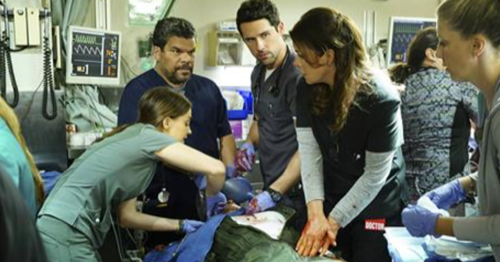 Tonight on CBS Code Black airs with an all new Wednesday, November 16, season 2 episode 7 called,  “Hero Complex,” and we have your weekly recap below! On tonight’s episode, season 2 episode 7 Willis  (Rob Lowe) and Campbell (Boris Kodjoe) are sent to a Russian submarine in U.S. waters to treat a sailor who was badly wounded during an explosion.

Both Campbell and Willis had been sent on a top secret naval mission on tonight’s episode of “Code Black” that no one knew about or could have predicted. So The hospital was short on doctors when a prison riot occurred nearby and the incoming patients nearly caused a massive overflow of patients. But the doctors that were readily available had tried seeing to their patients’ care and making sure that there wasn’t internal bleeding however it was a new experience for some of them when they began pulling out spoons as well as teeth out of the victims. And they also had patients that refused to admit that they were injured.

One of the prison guards had said that she couldn’t show any signs of weakness or the prisoners would kill her within a week. So she hid the fact that she had also been injured during the riot and had made sure that she had privacy when Rorish finally checked her over. However, Jackie was tough and her doctors felt that her injuries had been mostly superficial though that was the same thing they had said about another patient. One of the prisoners had also been told that his injuries were superficial and he had never flat-lined before any one figured out that his injuries went topical wounds.

Though that patient had had Angus and Mario as his doctors and the two had stabilized him in time. So the rest was merely a guessing game. They had to try and guess what was wrong with their patient yet they had to do as the hospital was in lockdown. The hospital had been put in lockdown when a prisoner managed to escape his hospital bed and stab Jackie who was watching over him so that had thrown in chaos. No one knew where the prisoner went or if he would free his buddies that were still handcuffed to their bed and on top of that they had to look for a skinhead knowing that he had a personal grudge to settle.

So no one was happy with the turn of events and Rorish had been refused at the door when she tried to take Jackie up to surgery, but thankfully they had another option because they had Heather. Heather was a surgeon and she had everything she needed in center stage. Yet, Jackie still died at the end of the day despite everything Heather had tried to do and so the young doctor had taken Jackie’s death personally. Heather, it seems, had promised Jackie earlier in the day that she was going to go home and she hated that she hadn’t been able to upheld that promise. And that she was going to have to tell Jackie’s daughter that she died.

Heather, though, suffered a minor with all that the doctors were going through. The hospital was still on lockdown and there was still a skinhead on the loose. But Damien did show up eventually and he did at the worst time. The skinhead had gone into the doctor’s break room and he had found Rorish before she had a chance to escape. So Rorish had feared for her life yet she had been lucky because Damien had been weak. Damien had made a run for it before he was fully healed so he was low on blood as well as pain medication and he ended up passing out at just the right time. Which was before he could escape or harm anyone else.

Rorish however, didn’t hold what he nearly did to her against him. She had immediately called for gurney and she had done her best to save his life even if Heather disagreed. Though Heather had later said something to Rorish. She had asked Rorish how she could save a murderer’s life seeing as he gets the best medical care in the world and his victim was on her way to the morgue. So Rorish decided to be fully honest with fledging doctor and she told her that they didn’t get to decide who they should treat or not. They were doctors who had taken an oath and she had seen a patient that needed help instead of a murderer. And so Rorish had been clear with her answer.

Heather other hand refused to see the other side of the argument and she hadn’t been in the right mindset to fight for what she believed in. So she had stormed off because her job didn’t always match her ideals and, funnily enough, she wasn’t the only one that thought that way. Angus’s patient had been of a similar opinion because he found out that he had heart failure and he had refused to be put on the list for a new one. He said that he had his chance and that someone who was good deserved a second one. Yet, he had someone that cared about him and that told him that he had atoned for what he did. And that it would be ok to take a new heart.

However, Heather and Rorish had to talk to each other one on one before Rorish could agree that she was panicked that day and for them to finally share a drink for Jackie. So there comes a time whenever doctor has to make peace with the job and tonight was Heather’s turn. She realized that she couldn’t go into any Emergency Room or OR with a biased mentality and luckily for her it was never too late to learn. Willis had seemingly needed to be reminded of that lesson when he boarded a Russian Submarine with Campbell and they had to treat a Russian sailor.

So Willis eventually had to put his own bias to the side to treat the injured and surprisingly he ended up meeting Putin’s cousin as well as getting a giant bottle of Russian Vodka. But Willis and Campbell still have a long way to go before they become friends and in the meantime, Angus was there to support Mario at Mario’s father’s funeral.