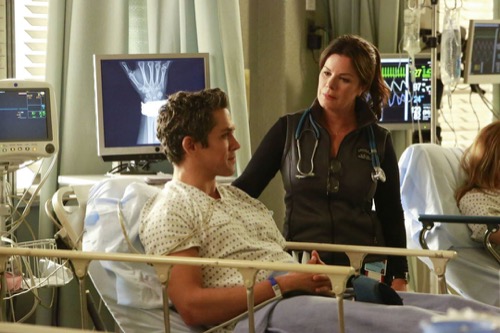 Tonight on CBS Code Black airs with an all new Wednesday, November 23, season 2 episode 8 called,  “1.0 Bodies,” and we have your weekly recap below! On tonight’s episode, season 2 episode 8 as per the CBS synopsis, “The doctors treat cult members who unwillingly survived a mass suicide attempt. Meanwhile, Mario (Benjamin Hollingsworth) decides to connect with his late father’s girlfriend.”

Mike was apparently walking again. The surgery that many had thought was a risk had fully paid off in the end and it had seemed like he had regained most of his motor function. So all Mike could think about was doing everything possible to return to work and he did that. He had done tests to prove that he hadn’t suffered any brain damage during his coma and he was weening off of the pain medication. However, Campbell wanted to play it safe with Mike’s recovery. He thought that Mike shouldn’t rush into anything and so he wanted to start the other man off small.

Campbell had asked Mike to take on a supervisory role around the hospital and to just assist until it was truly safe to return to surgery. But Mike didn’t want to wait and so he had gone against Campbell the first chance he could. Mike had been in the ER when a room full of people had suddenly become sick and no one had known what was wrong with them though their symptoms all appeared to differ and there was more than one person that needed incubation. So Mike grabbed a scalpel and he was going to incubate someone on his first day back when Elliott passed out.

Elliott had been right next to Mike as Mike was making his first cut. So many had written off what happened to Elliott as the newbie still being afraid of blood yet Elliott wasn’t the only one that passed out. Eloise who had been working on another patient had fainted within seconds of Elliott doing so and Willis was able to connect the dots from that. Willis realized that there was something on the patients that was making them sick and so Campbell told everyone to take the patients outside.

Outside there would be access to the emergency water access system and so that washed off whatever chemical was making everyone sick. Though the patients were confused when they started to wake up and nothing made sense until their leader Paul finally came to. Paul Wentworth had asked for his wife and then he had cheered when he found out that she had died. He had send that his wife had transcended and so it had taken some time before Paul truly described the cult he was running.

Paul and his followers all called themselves the Children of Elysian. The Children believed there was a digital world called Elysium and that they could reach that nirvana by hooking bracelets into their arms so that could reach their consciousness when they died. So Paul had told his followers that he found a way to preserve the mind and, like Willis said, email themselves to the future. Yet, such a thing is impossible and it was basically the delusion of a madman. Paul had claimed to be a neurosurgeon and futurist so he sold people story.

A story that he had told people that he knowingly isolated from their friends and family. So he was delusional and he was ill. Paul had never been having visions sent by God. He had simply been seeing things because he had a brain tumor that was slowly killing him. But finding out that he had a tumor that were sending him visions didn’t change Paul’s mind. He just told his followers that God had sent the tumor as well and so one young girl committed suicide because she truly believed everything that Paul had told her. And unfortunately others then had to be watched.

Dana was another one of the Children and she had been widowed young. So Dana had wanted to join her husband in Elysium and she refused to see her parents when they came to check on her yet Dana had had Charlie. Charlie had also been part of the cult and he had been the wall to call for help after their dear leader convinced them to practically bathe themselves in homemade pesticide. However, Dana had told Charlie that he had betrayed her. Dana had still counted herself as married and so she had wanted to see her husband again. And blamed Charlie from keeping her from that.

So it didn’t matter that Charlie loved her or that she could have loved him if she had let herself because all she could see was the life with Sam that had been stolen from her. But Charlie had later died from injuries and so Rorish had showed Dana Charlie’s body. The doctor had wanted Dana to see what the pesticide did to him like making him choke on his own vomit or that he could still smell his own burning flesh as he died and sure that could have been too much to bare however Rorish had wanted really happened when someone died and that now Charlie was gone.

Charlie didn’t have family or friends from outside of the cult. So there was no one to remember or even say that he was here, but Dana had heard so much that she had wanted someone to remember Charlie and had given up on her death wish in order to grieve for her friend. Yet, it was going to be a while before Dana could ever return to normal and that could lie at Paul’s door. Paul had tried to kill himself and he had been revived by Willis and even Dana’s father who had been nearby and hadn’t wanted Paul to see his stupid Elysian fields.

Though Paul had still believed he was ahead of his team so there was no changing yet thankfully there weren’t a lot of foolish men like Paul around. Mike had apparently realized that he wasn’t ready to come back because he had would’ve accidentally killed a child if his brother Angus hadn’t been there. So Mike chose to pass on the legacy they had to his brother. Angus had come a long way and he was confident on his own that he didn’t need his big brother around. And it turns out that it was Mike that now needed him.

Mike though was going to need time as well to find himself and he was going to be doing that away from the hospital though Mario who had said he didn’t want anything to do with his father’s girlfriend now that his father was dead had gone on to call the woman because he never got the chance to thank her for how much she had been there for his dad.