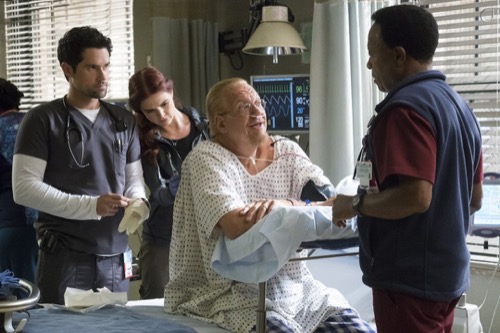 Tonight on CBS Code Black airs with an all new Wednesday, November 30, season 2 episode 9 called,  “Sleight of Hand,” and we have your weekly recap below! On tonight’s episode, season 2 episode 9 as per the CBS synopsis, “Willis, (Rob Lowe) Leanne (Marcia Gay Harden) and Jesse (Luis Guzman) risk their lives to operate on an injured officer who has an explosive bullet lodged in her leg. Meanwhile, Mario,  (Benjamin Hollingsworth) Noa (Emily Tyra) and Guthrie (William Allen Young) treat a magician who comes to the hospital with breathing difficulties.”

Usually, the hospital would go to the patients if the patients couldn’t go to the hospital however Noa had appeared to be a little out of depths when she joined Dr. Willis and unfortunately he noticed that. Willis had apparently seen the way Noa was busy with looking around her at the carnage around which had been all over the road that she barely glanced at her own patient. So he told Noa that she needed to focus on the injured who were clearly the ones that needed them and that if she couldn’t handle being a doctor that he would get someone else. But Noa did eventually compose herself.

Noa had simply been a thrown for a while because of the kind of conditions that she and Willis were working in. The doctors had been called to the scene of a shoot-out and so it had been just pure carnage everywhere they looked. There were officers down, vehicles destroyed, and everyone there were trying to recover from having their worlds being turned upside down. However, Willis got Noa to focus and she was able to see to the two injured paramedics that had merely been at the scene as a precaution. So Noa and Willis did do everything possible to stabilize their patients yet there had overlooked something.

Both Noa and Willis had overlooked Fiona. Fiona had been one of the paramedics that had been injured and the doctors had stopped the hemorrhaging though they didn’t spot an exit would and no one bothered to check on the condition of the bullet in Fiona’s leg until they reached the hospital. So sadly it had taken some time for someone to check Fiona’s x-rays and by time they realized the bullet in her leg hadn’t exploded it had been too later to take her out of the hospital. The hospital as some may recall was filled with oxygen tanks that simply needed one spark to bring the whole thing down. Yet, thankfully Willis later came up with a solution.

Willis had said that they could still treat Fiona at the hospital and that he had no problem with volunteering for the surgery. Though Campbell had warned Willis that he couldn’t put anyone in danger. He had assigned a designated room for Willis to perform the surgery and he had placed most of the patients as faraway as he could, but he wasn’t going to offer Willis any other doctors or nurses. So Willis had to either do the surgery on his own or find other volunteers and not that surprisingly there weren’t other volunteers. And so Willis was fine with handling on his own, only Rorish and Jessie ended up surprising him.

Rorish and Jessie had joined Willis for the surgery and together they worked on removing the unexploded ammunition out of their patient’s leg. But Noa still had a problem with handling the tougher issues. Noa had been assigned to notifications and what that meant was that she had to tell a young pregnant woman that she was a widow however she chickened out at the last second and decided to go work with Mario. Mario was still treating the other patients that came into the emergency room and so he was later dealing with a magician that had a tumor that everyone thought was cancerous.

Only the guy, Johnny, had told them that they should believe in miracles and then he had surprised them all with the results of the biopsy. The biopsy said that the tumor wasn’t cancerous and that had been a miracle. So Noa got around to talking to Mario about what happened earlier. She had told him that she had never seen anything like it and that the patient that died had actually been praying at the scene. However, what got to her the most was that the patient had asked her to tell his wife that he loved her and that she couldn’t do. She said she it had been too scary for her and Mario didn’t judge her for that.

Mario had told Noa that she had plenty of time to tell the widow what her husband said and had even mentioned that she could trying calling or sending a letter if she still couldn’t face the woman. Yet, Noa wasn’t the only one that had to notify family. Both Heather and Angus worked on a case involving a single mother with lupus and they had wanted to do everything they could for her though the pulmonary embolism had been unexpected. So they had to rush the patient into surgery though before they did that they had wanted to give her the chance of making up with her brother. The patient and her brother were constantly arguing and Angus felt he should put a stop to it.

Angus had been honest about the young woman’s condition and that had forced her brother into realizing that he might not have a lot of time left. So the siblings were able to talk and they remembered how much they loved each other, but sadly love couldn’t be enough. The young woman had gone into cardiac arrest during surgery and she died on the table. Though prior to surgery, there had been something else she did. She had made a video in which she said that she wanted her son to go to her brother if she didn’t make it and so the bachelor uncle suddenly found out he was going to be raising the only family member he had left.

But Noa did eventually make that call and had been a step in the right direction for her. So the magic she had seen had inspired Noa however she wasn’t the only one that had changed. Willis had also changed for the better because while his standoffish behavior may be cute, it doesn’t necessarily means that he could handle everything on his own so it was good thing he made friends. Rorish and Jesse had helped him get the ammunition out of Fiona’s leg and they saved her life as well as shockingly earning Campbell’s respect. Campbell chose not to reprimand anyone afterwards and he had asked Willis to help finish Fiona’s surgery. And so you know he was in a good mood.

And they were familiar faces in the ER. The married couple that came in had also come in on the night they had gotten engaged and the engagement was a funny story. The guy had apparently put the ring on his penis instead of somewhere conventionally and he didn’t know how to get it off or how to stop it from cutting off his circulation. So the couple had been in the ER when they had finally gotten that ring off and only then did the woman say his yes to the proposal meaning the engagement didn’t happen until afterward at the hospital. However, the problem this time around was not because of a ring. It was because the guy had fallen in the shower.

Xander as it happens had convinced his new wife that they should be adventurous on their wedding night so they had gone into the shower to dance and he claimed that he just slipped though that hadn’t even been the worst of it. Xander had also fallen on his wife and he broke her nose. So the new bride was upset about her nose and Xander was claiming that he had merely been clumsy. Yet, Xander later revealed that he had taken enhancement pills which had again upset his new bride and unfortunately those pills were responsible for the fall. The doctors had taken a look at his chart and they had noticed that he was having heart problems that were most likely brought on by the pill.

So Xander had to be watched carefully and they couldn’t go on their honeymoon, but in the end the bride didn’t mind because she wanted Xander to get better first.