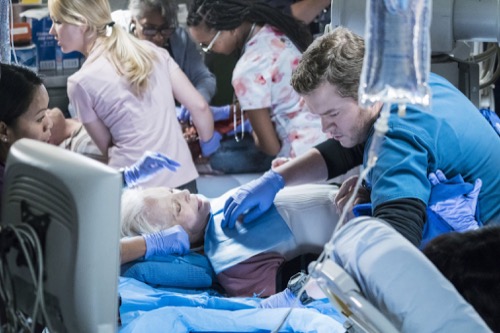 Tonight on CBS Code Black airs with an all new Wednesday, December 21, season 2 episode 11 called,  “Ave Maria,” and we have your weekly recap below! On tonight’s episode, season 2 episode 11 as per the CBS synopsis, “A code black at Angels Memorial takes a turn for the worse when a city-wide blackout leaves the hospital without power or back-up generators. Campbell (Boris Kodjoe) and Leanne (Marcia Gay Harden) divert high-risk patients to a nearby care center, while Elliot (Noah Gray-Cabey) and Heather (Jillian Murray) become trapped in an elevator with a woman in labor; and Willis and Dr. Nolan try to help a 92-year-old woman who think it’s 1942.”

Jesse was recently fired from Angeles Memorial Hospital. He had apparently tried to cover for his good friend Gunthrie when he realized the other man was affected by early onset Parkinson’s however it had been Jesse that told Campbell about what he did and he hadn’t argued when he was fired. But Rorish didn’t want to let Jesse go and she’s been trying to convince him that she could argue for him at the hospital. So there was a chance that Jesse could get his job back only he told Rorish that he wouldn’t come back until Gunthrie came back. He said Gunthrie could still practice medicine and so unless Rorish could convince Gunthrie then Jesse was going to stay at his new job.

However, the new job had been a step up for Jesse. He worked at a private clinic and spent most of his time seeing patients right before their cosmetic surgery. So Jesse’s new job meant less stress, better pay, and even access to a cappuccino machine yet all the same there were a few drawbacks. Namely his new boss. Jesse worked for Dr. Silverman and he eventually saw the good doctor nearly risk the patient’s life all to give her new breasts. And he had tried to say something to the doctor and the other man had shut him down. Silverman thought he knew more than a “mere” nurse and was going to continue to work on his patient despite what Jesse said.

So if the patient hadn’t gone into cardiac arrest as Silverman had been talking to Jesse then the doctor would have killed her, but luckily Jesse knew what to do in such a situation and he had stabilized the patient before calling for an ambulance. Yet, Jesse had wanted to stay with the patient so he had ended up going with her to Angeles Memorial and it had thrown Rorish when she saw Jesse come in again. She had thought that maybe he reconsidered what she said and wasn’t really disappointed when he informed her that he was just following a patient because she had missed him more than she let on.

Only Campbell didn’t miss Jesse and he had wondered why Jesse was in his ER again when the worst happened. There was unfortunately a blackout throughout the whole city and the hospital’s backup generator refused to kick in. So there was a woman in her nineties that thought she was still an army nurse during WWII, Jesse’s patient that needed surgery and had to settle for whatever could be found in an ER during a code black, and finally a pregnant woman was stuck in the elevator with just Heather and Elliott to deliver her baby. But a solution was thrown together and it meant that some of the patients were transferred to a nearby hospital that still had a generator.

The other hospital however had its own doctors and they didn’t like having other people in their house. So Rorish got into a few confrontations with some of the people there. She had tried to tell them what her patients needed and they had felt they were in the right because their hospital didn’t have a center stage where people operated on a patient in full view of the ER. Though Dr. Kim wasn’t on her high horse when the same patient that Rorish tried to warn her about had died whilst under her care. She knew that Rorish had been right and that should have taken more extreme measure instead of waiting for a specialist and so she couldn’t face Rorish afterward.

However, Dr. Kim wasn’t the only one to miss warning signs. There had been another female doctor that Angus had been curious about yet she had been condescending to Angus despite not knowing what she was talking about and so he hadn’t been as patient as Rorish. He simply stepped in to feel the patient’s heart beat and then told Dr. Pruitt if she had felt what was wrong as well. So that forced Pruitt into actually checking on her patient and realizing that the young woman was suffering from an irregularity. And so Angus kept on pushing Pruitt into being a better doctor and funnily enough that resulted in her being a better doctor. She just had to do as Angus said and trust her instincts over procedure.

So the patient that they had been working on had survived because they had learned to work together and Angus even got a date out of it, but that had been something Angus had picked up on from Jesse and Jesse was still practicing what he was preaching. Jesse hadn’t been wanted back at the hospital and Campbell had wanted him gone regardless of the fact that Angeles had been low on staff with patients being transferred out. But Jesse had stayed by Renee’s side because he promised her that she was going to be alright and in time he had showed Campbell how much the hospital truly does need him back. And that stuck with Campbell.

Campbell had been worried about his daughter in the blackout. But Jesse had reassured him in the only way that he could and together they had seen Renee threw the danger. So Jesse acting as the usual force that he was had gotten him his job back and in other good news his “babies” managed to make it through the blackout. Mario and Nola had performed surgery on a woman in an ambulance and had of course needed Rorish’s help to complete what they started however that forced Rorish and Dr. Kim to work together again and that time they got it right. They saved the patient and they had warned the younger doctors to never do that again.

Mario though had just been thankful that he had been right. There had been another instance when he had convinced Angus to perform a surgery and it turned out the patient didn’t need it. Yet, he had saved a woman’s life because of his quick thinking and that had given him back some of his spark. So Mario saved someone, Angus saved someone, but Heather with Elliott’s help had saved two people. They had saved a mother and her baby’s life after the baby became stuck and so quick procedure in the elevator meant the poor woman eventually got to leave with her baby. And that was a good day.

Though the woman who had to relive WWII had had Willis there to make her final moments at least peaceful.