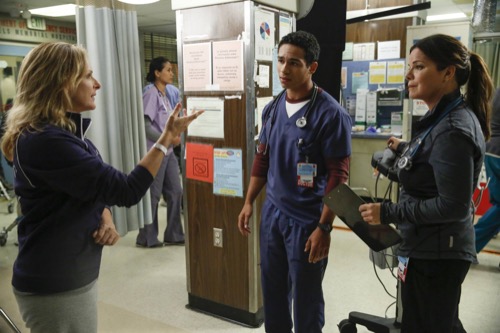 Tonight on CBS Code Black airs with an all new Wednesday, December 7, season 2 episode 10 called,  “Ave Maria,” and we have your weekly recap below! On tonight’s episode, season 2 episode 10 as per the CBS synopsis, “A 13-year-old girl arrives at Angels Memorial following a seizure caused by spina bifida and the doctors are shocked to learn she is Campbell’s (Boris Kodjoe) daughter. Meanwhile, a workaholic deaf patient and her translator are treated after their car rolls into the Los Angeles River.”

Dr. Gunthrie has recently been experiencing a tremor in his hands. The tremor however, isn’t as bad it could be and so the doctor tried to deny that he has a problem to begin with. But unfortunately his hands were getting worse rather than better and others have already begun noticing that he has a problem with holding anything steady. So the others have tried talking to him about it. Malaya and Jesse had seen the problem for themselves and they considered Gunthrie “Rollie” to be their friend so they told him that he needed to get himself checked for Parkinson’s. And Gunthrie had shouted them down.

He said that there was nothing wrong with him and he was doing his best to ignore what was happening. However, Gunthrie eventually came to his senses enough to officially get himself checked out and his worst fears were realized. He was told that he did have Parkinson’s and he was advised to tell Campbell about it. So Gunthrie had told his friend and fellow doctor that he wasn’t going to do that because being a doctor was his life and that he couldn’t let anyone take that away yet there was an emergency that required him in Center Stage and it had been about Campbell’s daughter, Emily.

Emily had had a seizure and she had needed a steady hand to treat her. Yet, that steady hand hadn’t been Gunthrie. Malaya, Angus, Mario, and even Jesse had all watched him prepare a needle to inject into the preteen’s head and they were all apprehensive. They had all knew that he had tremors and no one felt comfortable about putting a young woman’s life in his hands. So Malaya and Jesse were the ones that stepped up. Jesse had told Rorish about the problem and Malaya had told Gunthrie to stop because he shouldn’t be performing the procedure. And so Gunthrie’s secret got out though he still didn’t see what he did or almost did was wrong.

Gunthrie had started to take medication for the tremors and that had made him believe that he didn’t need to sit out on any of the procedures. Though there was a problem and no one had known that he was on medication. He hadn’t told anyone that he had seen a doctor and he hadn’t bothered reassuring the people that were worried that he was on medication. So Gunthrie had truly become irrational when he blew up at Malaya. He said that his condition wasn’t her business and that she had humiliated him in front of everyone else. Most especially Campbell who had to find out that Gunthrie wasn’t fit to treat his daughter nearly after the fact.

Gunthrie though couldn’t accept that he shouldn’t have tried holding a needle and that maybe he should have voluntarily let someone else take over. But he had decided to quit after everything was said and done so there was nothing anybody could do about it. Not even Rorish who had tried to fight for him with Campbell who had been more than upset. So Gunthrie was gone and Campbell was getting vengeful with everyone else. Campbell had felt that Malaya should have come forward earlier and he had wanted to suspend her for what she almost let happen. And Campbell would have probably tried to punish others as well, only no one else was coming forward.

Angus had thought he and Mario should say something yet Mario had reminded him that they would be putting their careers on the line. However, Jesse who was usually the voice of reason hadn’t gone to tell Campbell that he also knew and thankfully Rorish didn’t rat him out. Rorish still cared about her friend so she wanted to know was why he didn’t tell her about Gunthrie. So he tried to say that he was handling it and she didn’t really buy that. Rorish had said that Jesse was supposed to be her right hand in the ER and that she thought he would have come to her earlier. And so Jesse replied that he didn’t work for her.

Jesse was a bit testy about that about because there was a patient who acted a translator for a deaf businesswoman. Yet, the client whose name was Kathy Bryne had quickly found another translator when her interpreter was getting checked out. So Daniel who was the patient had said that guys in their position should have known better. They should never think they’re their boss’s friend when the truth was they were just an underling, but the same patient that had riled Jesse up had also been the one to calm him down. Jesse had still been treating Daniel when Daniel’s boss told him that she does care about him and that he was more than associate to her.

Though telling Campbell that he knew about Gunthrie didn’t do anyone good. Jesse got fired and Malaya was still on suspension. So Mario and Angus also tried to step up however Rorish told the guys that too many had gotten hurt by what happened and so she protected them because she knew that their hearts were in the right place. Only it was still the end of an era. Gunthrie was leaving the hospital, Jesse was leaving the hospital, and surprisingly Willis was going to be sticking around. Willis had flirted with the idea of rejoining the military because his old boss had come to see him and came as a disappointment to find out that the General that was a junkie that knew he could play on Willis’s feelings of duty.

So everyone had experienced disappointment, but if Campbell could smile for his daughter then there was a chance that everyone could enjoy Christmas this year.