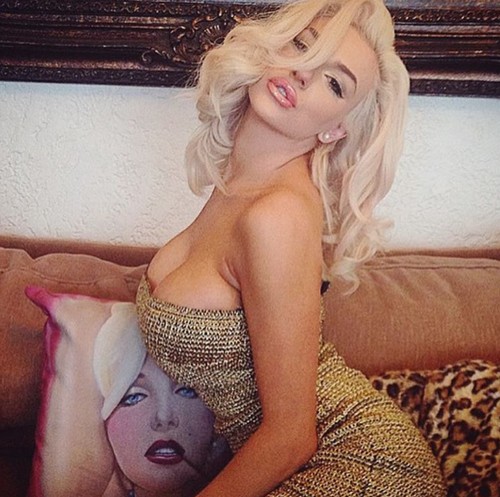 Courtney Stodden is pregnant with baby number one. Rumors have been circulating for a while not that Courtney Stodden and her husband Doug Hutchison were pregnant with their first child – and tabloids ran the story last week. Stodden confirmed the news to US Weekly – however she stressed that she is only 4 weeks along and had no intention of going public with the baby news just yet.

Courtney Stodden is now a whopping 21 years old, she rose to infamy when she married her husband Doug Hutchison in 2011, when she was just 16 years old (with her parents’ permission). Of course, the media had a frenzy with the couple, since her husband Hutchison was 50 years old at the time. The actor is most well known for his role in the hit show Lost.

Since Courtney and Doug were married, the couple has lived their lives through the tabloids – in all honesty they are a gossip magazine’s dream come true…there’s never a dull moment. Stodden and Hutchinson aired even more of their dirty laundry on the VH1 reality TV show Couple’s Therapy in 2013.

Courtney Stodden dished to US Weekly, “It’s a bittersweet time for me right now. I’m dealing with a lot of stress and emotions surrounding life and its ups and downs. Doug and I weren’t planning on going public with this so soon. I’m only four weeks along in my pregnancy. But some things are out of your control.”

At this point, it’s pretty shocking that it took Courtney Stodden 5 years to become pregnant. Most people believed that she was pregnant when Doug married her back in 2011 – because what other ridiculous reason could a 50 year old man have for marrying his 16 year old hook-up?

What do you guys think about Courtney Stodden and Doug Hutchison’s baby news? Share your thoughts in the comments below!