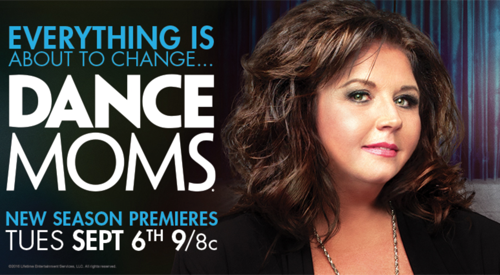 Tonight on Lifetime after a couple of months break Dance Mom returns and we have your Dance Moms recap below.  On tonight’s Dance Moms Season 6 Fall Premiere, Abby promises to no longer overlook her other dancers since Maddie’s departure.

If you missed the Spring Finale where Maddie and Mackenzie said goodbye to Abby we got you covered.  We have a full and detailed Dance Moms recap, right here for you!

On tonight’s Dance Moms Fall Premiere as per the lifetime synopsis, “Abby assigns Brynn and Kendall head-to-head duets with male partners; and Ashlee fumes when Jess calls out Abby’s favoritism for Brynn.”

Tonight’s episode will surely be filled with the usual Dance Moms drama. So make sure to bookmark this spot and come back for our Dance Moms Season 6 Fall Premiere recap from 9PM – 10PM ET! While you wait for our recap make sure to head over and check all our Dance Moms recaps, news, spoilers & more!

#DanceMoms starts outside ALDC LA with the girls just getting back from their break. Jessa is happy to be back in LA but worries how Abby will be now that Maddie and Mackenzie are gone. The girls talk about how different and strange it feels without them.

Holly hopes that Abby sees potential in the rest of the team. Ashlee wonders where Jill is today. Jessa says maybe they’ll get along better. Ashlee says Jill wrote some nasty social media comments about her along with Kira and calling her a horrible person.

Kira says Ashlee is horrible. Abby shows up and hugs the moms. Abby greets the girls then Kendall shows up a few minutes late. Jill sweeps in with apologies and says they just flew in this morning. Abby says with five of them, they are short-handed but the show must go on.

Abby says there is no Maddie to hide behind. Abby says she wants to be involved in the kids’ lives and will do better. She says change is good and can push you in a new direction. Abby says they need to perform and work hard this year.

Holly says this is impressive since Abby wants to work hard and get involved. Holly says it’s now what she’s used to. Abby starts pyramid and puts Kalani at the bottom and tells her to work harder. JoJo is next and then Nia.

Abby asks Nia to tell them what she did on break. Nia says she performed her new snog at the High Strung move premiere. She also did a Syncopated Ladies video. Abby says she came to watch her performances and she did it like a pro.

Kendall is next and Brynn is beside her at the top. Abby says Brynn is a pleasure to have along. Ashlee talks about traveling with Abby in Europe for two weeks with Brynn along. Abby says they’re going to Dream National Dance competition in San Jose.

Holly says she won’t be there since she’s judging a dance completion. Abby offers to act as Nia’s guardian on Friday night and says they can share a room. Holly is skeptical. Abby brings in Will and Yadiel, two young male dancers who will be part of the group routine.

She also has them doing duets. Kendall will duet with Will. Brynn partners with Yadiel on a duet too. Ashlee is happy and still thinks that her daughter will be the “next Maddie.” Holly is surprised she pitted those girls head to head.

Group rehearsal of the Saints Come Marching In begins. The moms talk about how good of a mood that Abby is in and Holly says it’s like they have a new teacher. She hopes the moms can turn over  anew leaf too and behave better.

Ashlee asks Jill about her negative social media posts about her over the break. Ashlee says people pile on and says things will be better if she can stop. Jill says they have all been through it and says she’s digging up old things and making herself a victim.

Jill says don’t bring up old shit. Jessa says Ashlee is upset about all the pressure on Brynn this week. Ashlee is aggravated with her. Jessa says why is she on social media and why is she crying. The other moms tell her to go cry in the corner but Holly goes to talk to her.

Brynn comes to sit with her and asks why she’s crying. Brynn says she heard them talking about her and her mom. Ashlee says this is the same old crap, not a new beginning. Holly tells Nia that yesterday was bizarre with Abby offering to be her guardian.

Nia wonders what’s up with Abby

Nia thinks they need to take this slow and Holly thinks it’s interesting Abby is taking such an interest in her. Holly thinks that Abby wants to be on Nia’s bandwagon since Nia is doing well right now. Nia says Abby is Abby and she will stick with Kira and Kalani for the trip.

Abby now starts coaching the duets starting with Brynn and Yadiel. Brynn is nervous about dancing with a boy for the first time. Jill tells Ashlee she can’t cry and get up and walk away. Ashlee says Jill has no room to talk since Jill walked out on Abby last year.

Ashlee thinks she’s being a hypocrite. Abby is feeling the pressure of the first ALDC competition without Maddie. Ashlee says it’s important the kids do well because they have to prove they can win without Maddie as well. It’s one day left and Jill is feeling it too.

Abby starts with Kendall’s duet and Jill thinks this is not a dance designed to win at competition. Kira says this is fun and Jill says maybe but it’s not a winner. Jill says Abby has already decided she wanted Brynn to win.

Jill says that Ashlee did a smart move by traveling with Abby this summer so now Brynn will get better music and choreography. Jill says she can’t tell Kendall that because she needs to just stay focused and do her best.

Final rehearsals start and both duets perform. Ashlee thinks nerves are getting to Yadi since he’s not used to learning dances this fast. Abby says the acting is bad and Brynn isn’t getting into this like Maddie would be. She compares her to Maddie and Brynn isn’t happy.

Preparing for the trip and competition

Ashlee talks to Abby about Brynn and says she can do it. Brynn goes to the bathroom to cry and she tells her mom they’re all going to make fun of me. Abby comes in and talks to her. Jessa is irritated and says they get everything they want and are still crying.

Jessa says she’s being a baby. Brynn says she can’t act and Abby says she can’t hear that. Jessa goes off on Brynn missing group performance and comes to tell them she needs to get in there and participate.

Abby asks why Jessa is coming to Brynn and talking like that to her instead of one of the adults. Kira goes off and says Kendall lost her duet for crying and doesn’t understand this. Brynn says Jessalynn is the meanest mom on the team and needs to butt out.

Brynn says she got some good advice from Abby about standing up for herself and not letting the moms get to her. Abby is greeted by a screaming mob of young girls. Jill is surprised all the fans came out even though Maddie and Mackenzie are gone.

Abby gives them a last-minute pep talk. Ashlee gives Brynn some last minute encouragement on what she needs to do. Mariel talks to her son Yadi and asks if he’s ready. Jill says Brynn has been crying and now Yadi looks nervous – she hopes their duet is doomed.

Jill tells Ashlee and Abby that Brynn has a pouty face and should be dropped. They tell Abby she’s enabling her and Jessa says Brynn is crying while the kids needed to learn the dance. Jessa and Jill pile on to Abby and Ashlee.

Holly shows up late before the performance and finds a lot of grouchy faces in the room after Ashlee called Jessa a bitch. Jill encourages Kendall to show her best side. Abby gives them some last minute notes then goes to take her seat in the audience.

Jill is happy Kendall has a duet but says Kendall knows she’s the underdog because of all the attention Abby was giving Brynn. Their duet starts and they looked good. Jill smiles the whole time. Brynn looks nervous backstage before her duet.

The moms go on attack

Ashlee comes out and tells Brynn that her mom said she was the one who didn’t want to do it. Brynn gets upset and says it’s Yadi not her. Abby comes backstage too. Nia and the others say that’s not what happened and it’s Yadi that doesn’t want to dance.

Abby tells Yadi that he has to dance and tells Brynn to suck it up and get out there. They perform. Brynn has a foot slip that makes her mom flinch. The applause seems genuine though. Jessa says Brynn is crying because she tripped.

Jill and Jessa are awful to Ashlee. Jill says it’s always “poor Brynn.” Now they all get ready for the group number and Abby says they have something to prove today. Jill says the dance was great and the crowd ate it up when they ended in the aisles.

Now it’s awards time. First up is duets. Abby says the moms bickering has made this a challenging week and says it affects the girls. Brynn and her duet partner take 4th place. Ashlee says no one wants to win fourth and says the moms are making her doubt herself.

Jessa and Jill laugh at her winning fourth. Kendall takes 3rd place which is also not too impressive. Jill is just happy that they beat Brynn and says that’s all that matters. That is pretty awful, right? Now it’s group awards. ALDC takes 1st place.

Holly says this shows everyone that they are stars and don’t need Maddie and Mackenzie. Abby thanks the two boys for dancing with them and says they can join ALDC anytime. Abby tells the girls she’s proud of all of them but tells Brynn no more tears.

Jill tells Abby she needs to be consistent with all children. Jill won’t shut up even when Abby tries to back her down. Jessa then chimes in and says don’t say one thing and do another and calls out inequalities. She says she would have taken the dance away from Kendall.

Abby says the other girls are tougher because they’ve been with her longer. Abby speaks up and says that she talked to the kids and knows what happened backstage. Jessa starts getting ugly and says it’s a conspiracy theory.

Ashlee asks Jill and Jess if they feel good for doing this to a child. Jill says she’s not responsible for her kid crying all the time. Jess and Jill storm out and say come to Abby Lee’s studio if you want to learn how to cry. They stomp out in a wave of b*tchiness.