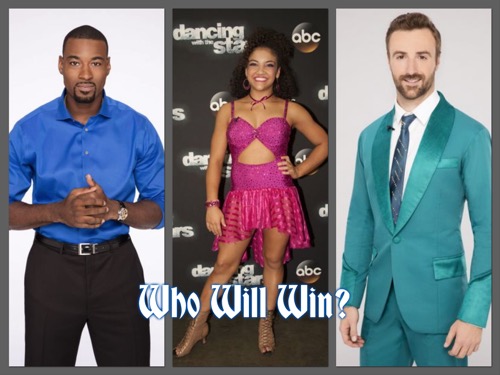 Tonight on ABC  it all comes down to tonight! The winner  of Dancing With The Stars season 23 will be announced and we have your all-new Tuesday, November 22, 2016, season 23 episode 12 episode Dancing With The Stars recap below!  On tonight’s DWTS Season 23 Finale  as per the ABC synopsis, “A winner is announced in the 23rd-season finale. Included: a final competition round; performances by Vanilla Ice, Andy Grammer and Kenny “Babyface” Edmonds; and a preview of the “Dancing With the Stars: Live! We Came to Dance” tour.”

Make sure to bookmark this spot and come back from 9PM – 19PM ET for our live coverage of the Dancing With The Stars Season 23 episode 12.  While you wait for our recap make sure to head over and check out all our DWTS recap, spoilers, news & videos, right here!

Tonight’s season finale of Dancing With The Stars kicks off with an impressive opening number, which is, of course, holiday themed and full of glitzy Christmas-inspired costumes. Not only is the stage packed full of DWTS pros and troupe members, but also some familiar faces like recently eliminated Jana Kramer, Babyface, Rick Perry, and more!

Dancing With The Stars hosts Tom Bergeron and Erin take the stage and kick off the season finale by showing off the Mirror Ball Trophy Award that the final three will be dancing their hearts out for tonight. Of course, before we can get to the exciting stuff, Tom and Erin share a highlight reel from last night’s performances, and Jana Kramer and Gleb’s elimination.

One of our favorite parts of the Dancing With The Stars season finales is we get to look back at some of the most memorable moments of Season 23. Tom Bergeron shares a clip of James Hinchcliffe and Sharna Burgess’ most popular dances so far this season, their Quickstep from Cirque Du Soleil night. Of course, there were also some not so great memorable moments, like Ryan Lochte’s protestors storming the stage.

Before we head to commercial break, DWTS fans get a special treat. Pop singer and former Dancing With The Stars contestant Andy Grammer takes the stage and performs his latest hit song for the audience.

The next encore performance of the night will be Calvin Johnson Jr. and Lindsay Arnold performing their Argentine Tango to “Hotel California” from Latin Night, and it’s just as hot as it was the first time we saw it! Tom Bergeron jokes that Lindsay is a “human windmill.”

Maureen McCormick won over our hearts all over again on Dancing With The Stars, sadly she was eliminated a few nights ago. But, Maureen McCormick takes the stage for the season finale with her pro partner Artem for one last dance. They’re joined by Keo, Babyface, and Ryan Lochte.

Maksim Chmerkovskiy’s stint on Dancing With The Stars was pretty short-lived this season, he was paired up with Amber Rose. But, certainly, wouldn’t miss the season finale. Maks returns to the DWTS stage with some of our favorite pro ladies and they dance to “Women Up.”

Maks returns to the stage a few minutes later for Laurie Hernandez and his brother Val’s encore performance. Who could forget their Trio Samba?

Vanilla Ice certainly brought some light-hearted fun to this season of Dancing With The Stars, and we were all sad to see him eliminated early on in the competition. Vanilla Ice takes the stage next and performs his hit song “Ice Ice Baby,” with the help of his former partner Witney Carson and his old BFF Rick Perry. Vanilla Ice is a tough act to follow, but Babyface Edmonds manages to do just that – he takes the stage next and performs a beautiful Christmas melody in a Winter Wonderland with some of the pro dancers.

Jana Kramer and Gleb are the next couple to perform an encore tonight. Of course, they recreate they’re ridiculously hot Argentine Tango, with the bed and shower in the middle of the dance floor. It’s safe to say this dance will be replayed for years and years to come online.

The pros and troupe dancers return to the Dancing With The Stars stage for another holiday themed performance, full of fake snow and Christmas cheer sponsored by Macy’s.

The final three contestants will take the stage one last time tonight to compete before the winner of the Mirror Ball is announced.
The first couple to perform is James Hinchcliffe and Sharna Burgess with a Viennese Waltz Foxtrot. [VIDEO HERE] Afterward, they get their final critiques from the judges.

Len: Firstly, Congratulations on making the final. When I see you dance like that, it’s completely understandable to see why you’re here. The chemistry between the two of you is just great, I can say no more than this, I wish I could dance like you.

Julianne: I wish I could dance with you. I have this love hate relationship with this 24 hours dance thing. You worked hard all week, and then sometimes it’s a true testament to see if you are the dancer and if you deserve to be in the finale. I am so emotional watching you guys because that dance completely captured your relationship and friendship. Thank you so much for this season, I enjoyed watching you two.

Bruno: What a class act James is. An artist of great versatility, constantly surprising and surprising, and you are so in tune with Sharna. It’s beautiful to watch what you guys create here night after night.

Carrie Ann: I don’t know what you guys much be feeling, because just watching you guys my heart is beating and I feel the pressure to get it right. Perfect choice for the fusion dance, Viennese Waltz and Foxtrot are the dances you do so well. When you dance you transport all of us in to this world of dreams where all men can lead and take us in to a fairytale. It was wonderful.

Calvin Johnson and Lindsay Arnold are up next, their fusion dance is made up of the Jive and Quickstep. [VIDEO HERE] Now, it’s time to hear their final critiques from the DWTS judges.

Julianne: First of all, that was the perfect fusion dance, there was content and kicks and flips. Literally, it was a perfect fusion dance. It has been such a joy to watch you. There are not enough rhinestones on that jacket to shine as bright as you do, so thank you so much.

Bruno: That really was a treat! A delicious high-spirited cocktail. The kicks and flips and the charm that you presented. You make us happy and you make us want to dance. It was another great hit for you!

Carrie Ann: Everyone is bringing something special, but what you do I cant describe. You just have this X factor. You make the world a better place when you dance because you are the every man’s man dancing. Yeah!

Len: Tutty Fruity. Watching you feel good is like chicken soup to the eyes. Like Julianne said, a proper fusion and Quickstep Jive. I just like watching you, you’re great.

It’s time for the final dance of the night – Laurie Hernandez and Val Chmerkovskiy, with the Foxtrot Argentine Tango.

Bruno: My darling! You really are a spectacular dancer, power, technique, flawless. Above all, you have grown in to a great performer as well. Right on the money honey, fantastic!

Carrie Ann: You have given us spectacular dance after spectacular dance. By far for me this was your best dance ever, there was some sort of beautiful nuance come out, your maturity, it was fantastic. I feel sad. If I have a daughter I want her to be like you!

Len: Miss Dynamite I have got to say, fabulous dance to close a fabulous season. The lifts and performances, I absolutely loved it. We have seen all three and I have no idea who is going to win. I am 72 years old and I am getting tired, can we just get on with it and see who will win!

Julianne: By the way I am with Len, I am so nervous, It really is anyone’s game. Every couple came out and nailed it tonight, and you were no exception. You came out with a bang and you finished it with a bang.

Jana Kramer takes the DWTS stage and performs her hit single “Circles.” Then, it’s time for the moment we have all been waiting for. Who is the winner of this season of Dancing With The Stars?

According to judges’ scores and America’s votes, the couple in 3rd place is … Calvin Johnson and Lindsay Arnold.
This season’s runner up couple is … James Hinchcliffe and Sharna Burgess.

And the Season 23 Dancing With The Stars winning couple is LAURIE HERNANDEZ and VAL!