Dancing With The Stars Review: Who Will Win DWTS Season 22 – The Good, The Really Good, The Bad and the Uncoordinated! 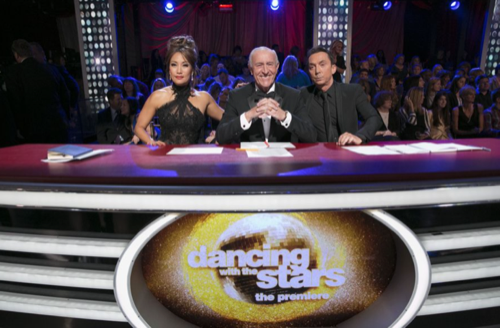 Monday’s premiere episode of “Dancing With the Stars” Season 22 was good overall and there is an interesting mix of talent this year – pro athletes, mostly male, but one strong female – plus the obligatory older guys – and a couple of people with moving stories – plus a Trump ex.

So who will take home the mirror ball for Season 22? We broke down the cast into four categories and rated who we think could win it all.

It’s kind of amazing how well Nyle DiMarco did considering the guy is deaf. He won last season of America’s Next Top Model and the guy is so hot, he gives off radiation. They were smart to rip his shirt open from the get-go because, you know, abs and stuff. But then he surprised the audience because he can really move. His problem will be a small fan base, but he’s good, really good. Score 23/30.

Wanya Morris was a pleasant surprise. Given that he was guy-band famous back in the 90s with Boyz II Men and is carrying about 50 extra pounds, it was shocking how much he could really boogie. Lots of stars have come on DWTS and ditched the LBs and did very well and Wanya could be one. If he works hard, sheds some pounds and keeps it up, he could be a contender. Score 23/30.

Considering Ginger Zee had a kid just a few months ago, how well she’s shaking and moving is impressive. What might be Zee’s best asset, though, is experienced partner Val. Plus, you’ve got to love a science chick, right? She really doesn’t have a fame game outside of weather, but if she keeps up the good work, she could make a name for herself as a dancer. Score 23/30.

We had high hopes for Antonio Brown and he was pretty good – but not great. His feet moved agilely which we expect given he’s a WR, but his upper body didn’t have as much swerve. His athleticism is his greatest asset, but what’s missing is grace. However, with his large fan base and since he’s a young, teachable guy, he could do well here – and should stick around for a while. Score 21/30.

Marla Maples came into this carrying Donald Trump baggage (is that why she was asked?), but it didn’t slow her up. That being said, you expect more from someone who’s been on Broadway, right? It looks like she maybe had some dance ability at some point but has been sitting around the house just cashing the alimony checks… Either way, she definitely has the potential to get better and could shine. Score 21/30.

Jodie Sweetin’s biggest problem was that she was grimacing like she was constipated throughout her entire dance. That had to cost her some points. But she’s in good shape, she’s flexible and has a great partner in Keo. Plus she’s coming off all the hoopla over Fuller House and has a compelling backstory. If she can turn her grimace into a grin, she could be really good and make the finals. Score 20/30.

With Paige VanZant, it’s a matter of tapping into the sweet science of dance more than MMA but she was surprisingly graceful and fluid – more so than you would think given her choice of career. What will help Paige is that her parents owned a dance studio so she grew up dancing. What could hurt is a smaller fan base, but she could perform well enough to overcome it. Score 21/30

The senior contestants usually don’t do well for obvious reasons but Geraldo Rivera was a real disappointment since he’s in good shape for an old dude and loves the limelight. Poor Edyta just danced around him and Geraldo staggered around stiffly. I’m not sure what he did was dancing at all. It was more of a rhythmic shuffle. But he should last longer than Mischa based on his larger fan base. Score 13/30.

As a former QB, it seems like Doug Flutie should be lighter on his feet. But he just plodded around the dance floor like he was running plays in the senior league of the NFL. It was stiff, he stumbled, it was just bad. But, on the flip side, if any women talked their hubbies into watching DWTS, he might stick around if his NFL fans vote for him. Bottom line is he won’t last over long and has no shot to win. Score 15/30.

Mischa Barton is known for her tabloid headlines more than her talent and she proved she has little of that on the premiere show. She was stiff and awful. It looked they pulled someone random from the audience. This has to be a last ditch chance at fame – too bad Mischa won’t be on the show long. Unless someone falls flat on their face, she’ll be gone soon. And we won’t miss her. Score 16/30.

Kim Fields is a TV icon – we know her from The Facts of Life and now from Real Housewives of Atlanta. Considering she has no particular athletic interests or past with dance, she was not bad. She’s also not good. Partner Sasha Farber couldn’t make up for her lack of musicality. She’s just meh and that was reflected in her middling scores on the premiere. She won’t win it. No way. Score 20/30

Let’s face it, all 254 pounds of Von Miller is a lot to move around a dance floor. You can’t expect the guy to be light on his feet – he’s a giant – and that’s why he was Super Bowl MVP. But he won’t be taking home the mirror ball trophy. He was a lot of fun to watch and has a big fan base, so he may stick around, but don’t look for startling improvements. Dance is just not his sport. Score 21/30.

The Bottom Line on the Mirror Ball

Mischa Barton has got to go ASAP – and Geraldo Rivera should be close behind. Doug Flutie won’t last either. Von Miller will have to dig deep if he’s going to last more than a couple of weeks and Kim Fields won’t be around for too long either. Then there’s the middle of the herd with Marla Maples, Jodie Sweetin, etc. But the odds-on fave to win this has to be Nyle DiMarco.

The guy is gorgeous, he can move, he’s got a rocking body – and he’s overcoming a handicap that should prevent him from being able to compete. It seems like his combination of talent, looks and hard-luck story could take him to the mirror ball win for Season 22. It would be surprising if anyone can unseat him. But Wanya Morris could be the underdog that steals it away. Looks like a guy win this year!