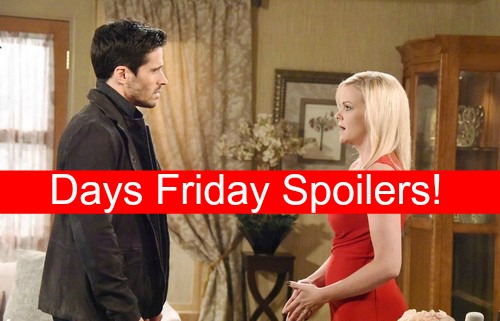 “Days of Our Lives” spoilers for Friday, January 22, tease that Belle (Martha Madison) and Shawn (Brandon Beemer) will have a long conversation about their relationship. Belle has been a mess ever since Shawn dumped her, but now he’s willing to try again.

Although Belle has been growing closer to Philip (John-Paul Lavoiser), it should be difficult for her to pass up this second chance with Shawn.

DOOL spoilers indicate that Belle will be interested in the idea of giving her marriage one last shot. However, it’s clear that Belle has a problem with cheating. If Belle and Shawn get back together, she could find herself tempted to have an another affair.

Philip can sense that Belle isn’t fully over Shawn, but he views Belle as the one who got away. It sounds like “Days” fans could be seeing a complicated love triangle over the next few weeks.

In the meantime, Philip has other matters to deal with. DOOL viewers know that Deimos (Vincent Irizarry) wants details on the drug Victor (John Aniston) had developed for Caroline (Peggy McCay). In a secret meeting, Philip told Deimos he couldn’t give him updates on anything right now. Victor has been through a lot lately and Philip doesn’t want to betray him.

Unfortunately, Deimos isn’t on board with waiting around. Deimos threatened to tell Victor everything he knows about Philip. That apparently includes some dark secrets.

What could Philip be hiding from Victor? It’s tough to say, but Philip will undoubtedly try to keep it all under wraps. “Days of Our Lives” spoilers say Philip will work to keep Deimos satisfied for the time being.

Elsewhere, Abigail (Kate Mansi) will have big dreams for her future with Chad (Billy Flynn). At first, Abigail wasn’t sure about jumping into another engagement right away. Luckily, Chad convinced Abby that he wanted to be her loving husband.

Chad also promised to take care of the wedding arrangements, but it seems Abigail will want to be involved in some of the preparations for their new life together.

Chad and Abigail are incredibly happy at the moment, but they’ll hit a slight bump in the road soon. Next week, we’ll see a disagreement on where they should live. Chad will probably want to move into the DiMera mansion.

You can bet that Abigail won’t be pleased with that suggestion. Stick with “Days of Our Lives” to see how they’ll resolve this issue.

So “Days” fans, what do you think about the news that Belle and Shawn could reconcile? Is that the right move? Can Philip keep Deimos at bay? Will Abigail’s dreams for the future work out like she plans? Voice your opinion in the comments below and don’t forget to check CDL often for the latest “Days of Our Lives” spoilers, updates and news.