BY Heather Hughes on May 30, 2016 | Comments: 3 comments
Related : Days of Our Lives, Soap Opera, Spoiler, Television 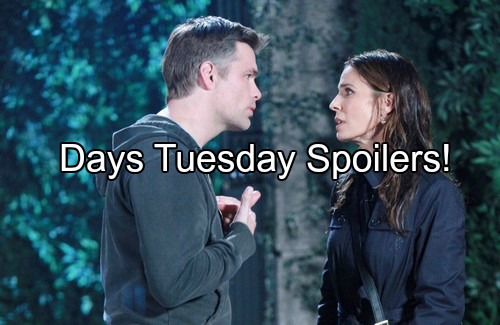 “Days of Our Lives” (DOOL) spoilers for this week’s episode on Tuesday, May 31, tease that Aiden (Daniel Cosgrove) will anxiously await news on Chase’s (Jonathon McClendon) condition. After getting stabbed in jail, Chase is now in critical condition at the hospital. The doctors are doing everything they can, but there’s no guarantee that Chase will make it.

Hope (Kristian Alfonso) still doesn’t really trust Aiden and she’s definitely not a big fan of Chase, but she’s not a monster (unless she’s murdering Stefano in cold blood of course). Hope knows it must be hard for Aiden to think about the possibility that he could lose his son. Longtime DOOL fans will remember that Hope faced a similar situation when her son, Zack, was hit and killed by a car.

Hope has been through the pain of an ordeal like this and it will undoubtedly bring her closer to Aiden. As for Chase’s fate, we know that Ciara (Vivian Jovanni) will see him crying as he embraces his dad. Perhaps that means Chase will pull through.

“Days” spoilers indicate that Rafe (Galen Gering) won’t be happy when he spots Hope and Aiden sharing a lengthy hug. He’ll realize that he could be losing the woman he loves so much. When Adriana (Alma Delfina) gets updates on Hope and Rafe’s issues, she’ll try to contain her excitement. She apparently thinks Rafe could do better than Hope.

In fact, it appears Adriana may have an alternative love interest in mind. “Days of Our Lives” spoilers reveal that Adriana will secretly make a phone call and request that someone come to town. It sounds like it’s time for Blanca (Ximena Duque) to hit Salem.

Blanca was supposed to debut in May, so it’s possible that we’ll see a little glimpse of her in Tuesday’s episode. If not, maybe some scenes were shifted and her debut was pushed to June. Either way, DOOL viewers can expect Blanca to show up soon. She’s been spotted on set in scrubs, so there’s a good chance she’ll be taking a position at the hospital.

Rafe may be tempted by this blonde bombshell, but you shouldn’t give up on “Rope” yet. Once Rafe starts investigating Aiden, whatever he learns could change the game. Stick with “Days of Our Lives” to watch Rafe try to get Aiden out of the picture.

So “Days” fans, what do you think about the news that Hope will feel drawn to Aiden? Will Adriana try to set Rafe up with Blanca? Will Rafe be too focused on Hope to commit to anyone else?