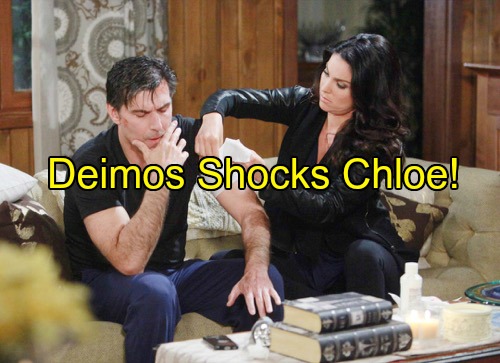 “Days of Our Lives” (DOOL)  spoilers tease that we’re about to learn more about Deimos (Vincent Irizarry) and Chloe’s (Nadia Bjorlin) connection. Deimos finally made it out of the river, but he was obviously in bad shape. At the gas station, Deimos made an intriguing phone call.

He said it was “Robert” and he needed some help.

Chloe rushed over and we’ll soon see her take Deimos back to her place. If you’re scratching your head over how Deimos and Chloe know each other, don’t worry. DOOL viewers can expect a good explanation. “Days of Our Lives” spoilers indicate that they’ll give us updates on the backstory through flashbacks.

When Deimos was released from prison in Greece, he was determined to get revenge on Victor (John Aniston). That meant going after Victor’s entire family as well. Deimos apparently got to know Chloe under a false name so he could uncover additional info about the Kiriakis clan.

Chloe has been with involved with Philip (John-Paul Lavoiser) and Brady (Eric Martsolf), so there were definitely some ties there. Of course, Daniel (Shawn Christian) was also Chloe’s ex and Victor’s godson. That was another link Deimos was interested in.

Chloe will wonder how Deimos got all battered and bruised. Plus, she’ll be curious why “Robert” suddenly vanished from Chicago. “Days” spoilers reveal that Deimos will decide to come clean about everything. He’ll admit that he was using Chloe to get details for his revenge plot.

However, Deimos will hint that he’s starting to see this situation in a different light. After his near-death experience, Deimos will think it might be better to just let go of his grudge. He spent 30 years in prison for a crime he didn’t commit and that was hard to swallow.

It’s easy to understand why Deimos would want to take Victor down.

Still, Deimos has hurting innocent people as a result. He’ll contemplate the idea of just moving on with his life. Deimos will suggest that maybe he should just enjoy the time he has left rather than wasting it on retribution.

DOOL spoilers say Chloe won’t be sure what to make of all this. She’ll be wary of allowing this dangerous liar be around Parker (Christian Ganiere). Nevertheless, Deimos’ softer side will shine through and Chloe will agree to let him stay for the night.

Stick with “Days of Our Lives” to see where things will go from here.

So “Days” fans, what do you think about the news that Deimos conned Chloe? How will Chloe react to Deimos’ revelations? Will Chloe be able to lead Deimos away from the dark side?