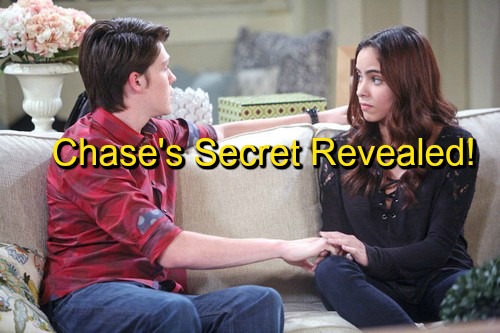 “Days of Our Lives” spoilers reveal that Theresa (Jen Lilley) will find herself feeling a bit envious of Nicole’s (Arianne Zucker) growing bond with Brady (Eric Martsolf). Now that Brady has Daniel’s (Shawn Christian) heart, he’s having strange dreams that feel almost like memories. Nicole recently learned that Brady had been dreaming about her. They should share a deep conversation soon.

Nicole will undoubtedly feel closer to Brady than ever in the coming weeks. Theresa will worry that Brady and Nicole could come together thanks to this bizarre connection. However, it doesn’t seem likely that any major reunion will come from this. If anything happens, it will probably pass quickly.

Most DOOL buzz suggests this is more about Daniel than Nicole. Brady will eventually have a dream about another woman tied to Daniel’s past. This mystery will begin to unfold as “Days” digs deeper into Daniel’s emotions and secrets.

Speaking of secrets, it appears Chase (Jonathon McClendon) has a big one. “Days of Our Lives” spoilers say Ciara (Vivian Jovanni) will be shocked by something she discovers. We don’t know for sure what Chase is hiding, but we have a hunch about where this is heading.

DOOL viewers know that Theo (Kyler Pettis) has been receiving harsh messages from a bully lately. Since Chase and Theo both have a crush on Ciara, Chase is a prime suspect for all of this tormenting. Every time the bullying is mentioned, Chase looks ridiculously guilty.

“Days of Our Lives” spoilers indicate that Ciara will uncover this secret while they’re staying at the Horton cabin. Perhaps Ciara will sneak a peek at Chase’s phone and realize he’s the one behind all the cruel texts. If Chase was hoping to win Ciara over somehow, his strategy clearly backfired. This would be tough for Ciara to forgive.

Plus, the bullying has only been drawing Theo and Ciara closer. On the bright side, Claire (Olivia Rose Keegan) has shown some interest in Chase. If Chase is indeed the bully, the rest of the group might shun him for a while. Maybe Claire will provide a shoulder to cry on as Chase talks about his regrets. Stick with the NBC soap for updates on how this storyline will develop.

So “Days” fans, what do you think about the news that Theresa will be envious of Nicole and Brady’s growing bond? Does Theresa have anything to worry about? What will Ciara discover about Chase? Has Chase been bullying Theo? Voice your opinion in the comments below and don’t forget to check CDL often for the latest “Days of Our Lives” spoilers, updates and news.