BY Heather Hughes on May 19, 2016 | Comments: 2 comments
Related : Days of Our Lives, Soap Opera, Spoiler, Television 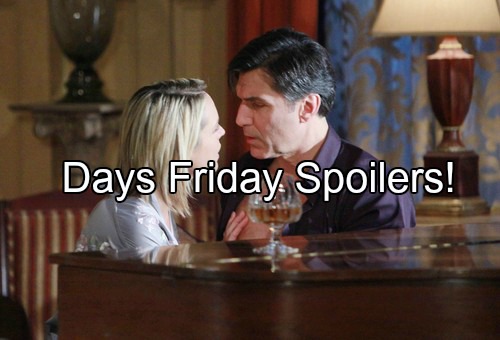 “Days of Our Lives” spoilers tease that on tomorrow’s episode Nicole (Arianne Zucker) and Deimos (Vincent Irizarry) will get close – REALLY close. Nicole needs to up the ante if she wants to stop Kate (Lauren Koslow) from marrying Deimos. While Kate is home packing for the trip to Las Vegas, Nicole has set the stage for romance.

Nicole hopes to convince Deimos that he should put the the brakes on his nuptials, but she’d rather not use sex to do it. However, that may be a step Nicole has to take. She has to do something drastic to keep Deimos from slipping away. DOOL spoilers suggest that things are moving in a risky direction.

“Days” viewers know that Nicole wants revenge for Maggie (Suzanne Rogers), but she appears to be straying from her original plan slightly. Dario (Jordi Vilasuso) asked if Nicole could avoid falling for her mark and she assured him it wouldn’t be an issue. It seems Nicole didn’t count on this level of magnetism.

Deimos’ actions are typically atrocious, but he looks like Prince Charming and he’s got the magic touch on the piano. It doesn’t take long for any woman to start seeing Deimos in a different light. Nicole might begin to appreciate a more vulnerable side of Deimos in the midst of all this. She’s playing a very dangerous game.

If she’s not careful, Nicole could justify Deimos’ behavior due to the pain he’s faced. She may have a tough time following through with her vengeance plans if she keeps this up. That could mean bad news for Victor (John Aniston). Nevertheless, “Days of Our Lives” spoilers say the plot will continue for now.

Kate is going to blow her top on next week’s episodes when she realizes Nicole is willing to do whatever it takes to win Deimos over. Another epic showdown is on the way. DOOL spoilers indicate that Kate will lash out in a jealous rage. She’ll be furious that Nicole isn’t letting this go.

Even a proposal wasn’t enough to stop the fireworks between Deimos and this Helena lookalike.

Will Kate reconsider her offer of marriage or just push even harder to get the prize? We’ll have to wait and see, but Deimos could have some second thoughts as well. He may decide he doesn’t want to be tied down if Nicole is willing and available.

Stick with “Days of Our Lives” for updates on where Deimos’ heart will lead him.

So “Days” fans, what do you think about the steamy connection between Nicole and Deimos? Is Nicole starting to feel some butterflies? Will Deimos shove Kate to the side for a chance with Nicole? Will Kate play dirty or give up in disgust?