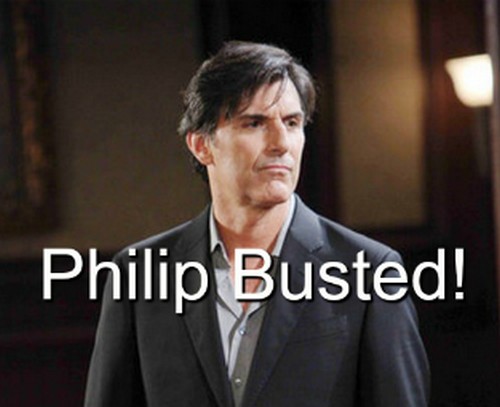 “Days of Our Lives” (DOOL) spoilers reveal that Deimos (Vincent Irizarry) will decide to put Philip (John-Paul Lavoiser) to the test. Deimos has dirt on Philip that could destroy his life, but he’s not certain that’ll be enough to convince him to betray his own father. As a result, Deimos will come up with a way for Philip to prove he’s committed.

Unfortunately, this whole setup is a trap. DOOL spoilers indicate that Philip will reluctantly go along with Deimos’ idea. We don’t know the nature of the plot, but it’s clear that it will involve a bold move. Philip will somehow stab Victor in the back and he’ll immediately get caught.

It’s a tough break for Philip, but that’s just the price he’ll have to pay for getting tangled up with Deimos. “Days” viewers know that Deimos is on a mission for vengeance. After sitting in a prison cell for 30 years, Deimos has had plenty of time to come up with strategies. He’s currently using the one he thinks will work best.

If Deimos succeeds, he’ll crush Victor and probably take Philip down with him. Deimos has also been looking at photos of Brady (Eric Martsolf), Maggie (Suzanne Rogers) and other people with ties to the Kiriakis clan. It looks like Deimos plans on coming after all of them one by one.

“Days of Our Lives” spoilers say Deimos will continue weaving his web and hitting all the marks of a good revenge scheme. Of course, Victor isn’t going to stand by and watch his family get targeted by the brother he disowned. As soon as Victor realizes what’s going on, he’ll likely take drastic action.

As for Philip, Victor won’t have much use for him either. Once Victor gets updates on his son’s betrayal, Philip will have to face the consequences. DOOL spoilers tease that Victor will rip into Philip for his disloyalty. Their bond may be damaged beyond repair.

Philip will be apologetic, but it’s doubtful that Victor will want to hear his excuses. Perhaps this ordeal will allow Philip to fully get on board with Deimos’ attempt to obliterate Victor. Maybe Deimos just had to make sure Philip had nothing left to lose. Stick with “Days of Our Lives” to see what else Deimos has in store.

So “Days” fans, what do you think about the news that Deimos will set a trap for Philip? Will Victor end up disowning Philip, too? What does Deimos have planned for the rest of Victor’s loved ones?