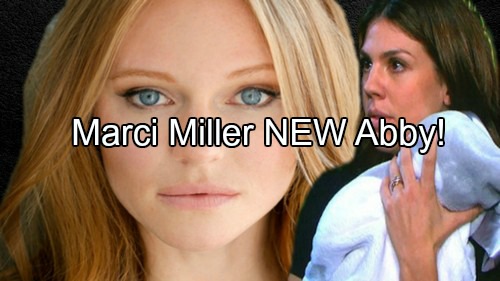 “Days of Our Lives” (DOOL) spoilers tease that we finally have a new Abigail! Kate Mansi’s last air date is drawing near and everyone has been buzzing about who would replace her. EW is reporting that Marci Miller has taken over the role. She’s already taping and her “Days” debut will come this fall.

Miller has some big shoes to fill. Mansi truly brought Abigail to life during her time on the NBC soap. It’s been heartbreaking to watch Abby’s descent into madness, but it’s left us all glued to our screens. Nevertheless, recasts are inevitable in the soap biz. Soon, we’ll have to say goodbye to Mansi and await Miller’s arrival.

Fortunately, “Days of Our Lives” knew they had to get this right. They did an extensive search for a new Abigail and we’re hoping that their hard work has paid off. Miller has a nice look and solid acting chops. She’s appeared in films like “Dog Bowl” and a remake of “Death Race 2050,” but we’re about to see what she can bring to the soap world.

Even though recasts are unavoidable, that doesn’t mean they’re easy. DOOL fans have gotten used to Mansi’s version and seeing Miller’s spin will be an adjustment. Still, everyone needs to give Miller a chance to prove herself. We’ll miss Mansi, but that doesn’t mean we can’t love the new Abigail as well.

When Billy Flynn took over the role of Chad, he brought a fresh take on the character. Viewers clicked with Flynn and he’s become one of DOOL’s hottest young stars. If Flynn has chemistry with Miller, “Chabby” could continue for many years to come.

As for Mansi, you can expect to see her as Abigail through June 24. On Instagram, Mansi teased that we should check out all of her social media accounts this month for special posts. She noted that it’s “a way to celebrate our journey and take us to the finish line together.”

Now that we have confirmation on the new Abigail, perhaps it will soften the blow of Mansi’s departure. At least we know there’s hope for the future of the “Chabby” pairing. Chad needs his wife back! Stick with “Days of Our Lives” for updates on their epic love story.

So “Days” fans, what do you think about the news that Marci Miller is the new Abigail? Do you feel like she’s a good choice? Are you optimistic about this recast? Voice your opinion in the comments below and don’t forget to check CDL often for the latest “Days of Our Lives” spoilers, updates and news.