BY Heather Hughes on May 27, 2016 | Comments: 3 comments
Related : Days of Our Lives, Soap Opera, Spoiler, Television 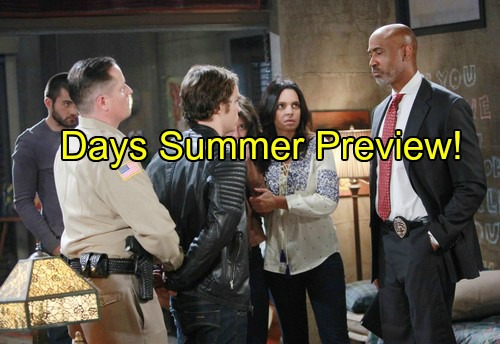 “Days of Our Lives” (DOOL) spoilers tease that this summer is going to feature some sizzling storylines. DOOL is really going to bring the heat in the coming months. First, Chloe (Nadia Bjorlin) will make her way back to town and she’ll be sticking around. That means Parker (Christian Ganiere) will be moving to Salem as well.

We’ll soon find out that Chloe’s life is somewhat complicated at the moment. Some secrets will be revealed immediately while others will have to simmer. “Days” viewers can expect Philip (John-Paul Lavoiser) and Chloe to grow closer once she makes her comeback. In fact, they may have been doing a little something off screen already…

Sonny (Freddie Smith) is set to return shortly before the Olympics begin. “Days of Our Lives” spoilers indicate that Sonny will come on the scene due to family drama, but he’ll quickly pick up where he left off with Paul (Christopher Sean). It should be just like old times once they start to connect again.

Other DOOL spoilers suggest that Ciara (Vivian Jovanni) will continue to keep Theo (Kyler Pettis) at a distance. In the meantime, Claire (Olivia Rose Keegan) may have her eye on Ciara’s leftovers. She’ll express interest in Theo, but will he reciprocate?

Elsewhere, Chad (Billy Flynn) will be forced to search for Abigail (Kate Mansi) when she disappears from the mental institution. Andre (Thaao Penghlis) will help with Chad’s hunt, but his motives may not be entirely pure. A mystery is brewing and it’s going to be juicy!

Nicole (Arianne Zucker) will find herself accused of murder thanks to Kate (Lauren Koslow). Deimos (Vincent Irizarry) will be the unlucky victim, but is there some trickery in play? “Death” just doesn’t mean much in Salem. Keep that in mind…

Eduardo (A Martinez) will embark on a risky mission while Steve (Stephen Nichols) finishes up one of his own. You can expect danger to be lurking around every turn. As for Summer (Marie Wilson), her obsession with Brady (Eric Martsolf) will reach an all-time high. She’ll make bold moves as she tries to win Brady over, but Theresa (Jen Lilley) won’t give up without a fight.

Finally, Rafe (Galen Gering) will become annoyed when Aiden (Daniel Cosgrove) just won’t let go of Hope (Kristian Alfonso). As a result, Rafe will choose to do a bit of digging. His investigation of Aiden may lead to surprising news. Stay tuned to “Days of Our Lives” for updates on all of these hot plots and more!

So “Days” fans, what do you think about the action that’s heating up this summer on the NBC soap? Voice your opinion in the comments below and don’t forget to check CDL often for the latest “Days of Our Lives” spoilers, updates and news.