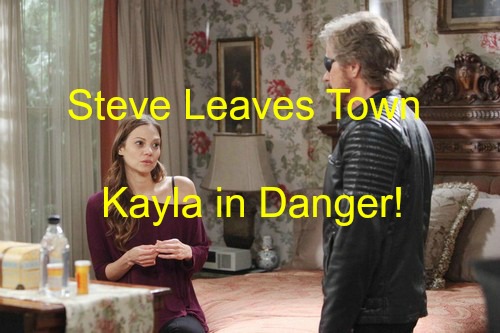 “Days of Our Lives” spoilers reveal that Ava (Tamara Braun) will make a jaw-dropping confession. When Ava deliberately dropped those baby photos in the square, she was hoping Steve (Stephen Nichols) would get curious.

Fortunately, Steve took the bait. He peeked at the pics and gave Kayla (Mary Beth Evans) updates on his findings.

Ava will be thrilled when Steve shows up at her hotel room looking for answers. In DOOL’s weekly preview video, Steve demands to know whose baby is in the pictures. Ava will reply that the child is Steve’s son.

Of course, Steve’s initial reaction will probably be to doubt Ava’s claims. Many “Days” viewers are doubting them as well.

From the moment Ava first showed back up in Salem, she’s told nothing but lies. Ava’s elaborate scheme has fooled Steve and Kayla into thinking she has leukemia. She recently told Steve that she had one last thing to take care of before she died. It appears Ava was referring to the issue of her child.

If Ava is being honest for once, it’s possible that Ava and Steve conceived a baby years ago. Ava could’ve given him up for adoption or he may even be deceased. However, it’s equally possible that this kid is just another one of Ava’s crazy fabrications.

Future “Days of Our Lives” spoilers seem to indicate that Ava’s plan is really more about Kayla than Steve. Perhaps Ava resents Kayla for taking the man they both loved. Steve will soon head off on a journey, presumably to find the child in question.

Ava may be sending Steve on a wild goose chase for a kid that’s not even his (or hers for that matter).

Bottom line, Steve can’t trust anything Ava says. That’s why Steve will have to uncover the truth for himself. Meanwhile, Ava will have Kayla right where she wants her. Who knows what Ava might do once Steve’s out of the picture? DOOL spoilers hint that something devious is in store.

Whatever Ava has up her sleeve will undoubtedly mean bad news for the Johnson family. Joey (James Lastovic) is sure to get caught in the middle of it. Stick with “Days of Our Lives” to see the chaos that lies ahead.

So “Days” fans, what do you think about Ava’s revelation? Does this child truly belong to Steve or could this be a lie to get Steve out of the way? What’s going to happen to Kayla? Voice your opinion in the comments below and don’t forget to check CDL often for the latest “Days of Our Lives” spoilers, updates and news.