Days of Our Lives Spoilers: Blanca Freaks When Menacing Ex Shows Up From Mexico – Guillermo’s Revenge Expands to Theresa 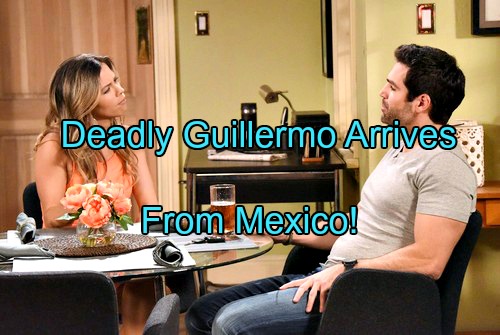 Days of Our Lives (DOOL) spoilers tease that Dario (Jordi Vilasuso) and Blanca (Ximena Duque) will continue to bond. They’ve shared a few cute moments since Blanca’s debut. Days really revved up the flirting after Dario was injured. Even in his weak state, Dario was still able to turn on the charm.

Blanca was open to the idea of getting together, so Dario will waste no time. Days of Our Lives spoilers say they’ll meet up for breakfast this week. Dario will once again try to steal Blanca’s heart.

Blanca had her eye on Rafe (Galen Gering), but he’s too hung up on Hope (Kristian Alfonso). She might as well give things a shot with another Hernandez. Dario wasn’t all that interested in Blanca at first either. He’d like for Nicole (Arianne Zucker) to be his main squeeze, but she fell for Deimos (Vincent Irizarry).

In other words, Blanca and Dario are stuck in the same boat. They should just make the most of it. Days of Our Lives spoilers indicate that they’ll chat and laugh over their meal. However, DOOL fans know that danger can pop up at any time. Big trouble is looming and Blanca will never see it coming.

The fugitives are wrapping up their stints, but another villain is about to emerge. Blanca’s ex-boyfriend, Guillermo (Kurt Caceres), will show up on a mission. He’s been attempting to track down Blanca for quite a while.

It’s not clear what happened between these two, but it obviously wasn’t good. Perhaps Guillermo was abusive in some way. If this dude is willing to travel to Salem from Mexico, it’s a safe bet that he’s highly possessive. Blanca has been running from her past, but it’s about to catch up with her.

Days spoilers state that Blanca will freak over Guillermo’s sudden appearance. Dario will undoubtedly do whatever he can to protect Blanca from her shady former flame. Of course, Guillermo won’t give up easily. He’ll likely decide to hang around town until he can convince Blanca to see things from his perspective.

While Guillermo takes in the sights, he’ll notice another Salemite he recognizes. It seems Theresa (Jen Lilley) has a history with Guillermo, too. Theresa was definitely in with the wrong crowd when she lived in California. Maybe the pair met up there. Whatever the case, Theresa won’t be happy to see Guillermo. She’ll recall that this guy is bad news.

Theresa has had to deal with a lot of drama lately. Tate’s kidnapping was almost more than she could bear. Xander’s (Paul Telfer) return has also taken a toll. After Theresa admits she lied about the attempted rape, she’ll be ready to move forward. Alas, this is fresh start is just the beginning of the end.

Once Guillermo appears, Theresa and Brady (Eric Martsolf) will face their toughest ordeal yet. It’s all leading up to Theresa’s heartbreaking exit. We’ll give you updates as other info comes in. Stay tuned to DOOL and don’t forget to check CDL often for the latest Days of Our Lives spoilers, updates and news.

Cheers to the weekend! #DAYS pic.twitter.com/a5jz57yeDV