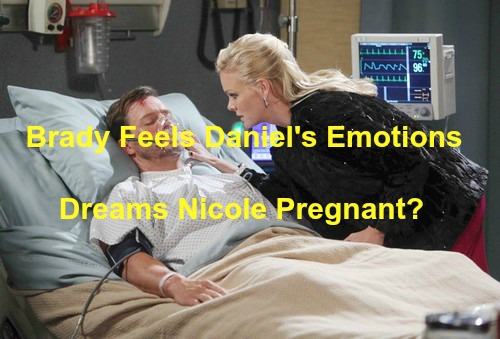 “Days of Our Lives” spoilers reveal that Brady (Eric Martsolf) will be grateful to be alive thanks to one of his best friends. Brady now has Daniel’s (Shawn Christian) heart, which means he’ll always carry a little piece of his pal inside him. As a result, DOOL spoilers indicate that Brady will begin to have strange dreams about Nicole (Arianne Zucker).

Brady will also feel like he’s experiencing Daniel’s emotions and impulses. It should be a bizarre sensation for Brady. He’ll undoubtedly struggle to make sense of it all. “Days of Our Lives” spoilers suggest that having Daniel’s heart will lead Brady down an interesting road. Brady’s new heart may tell him to go one way while his mind tells him to go another.

“Days” viewers will see eye-opening moments for Brady over the course of this storyline. Since we know Brady will have unusual dreams about Nicole, there are a few directions this could go in. Some DOOL fans suspect that Nicole might be pregnant with Daniel’s baby. It’s possible that Brady could dream of Nicole and her child.

Nevertheless, it’s kind of odd that the show chose not include any recent love scenes featuring Daniel and Nicole. We can assume what they were doing off screen, but it’s still a weird decision. If Nicole is pregnant, it would’ve been more satisfying if we had actually watched this baby being made.

Maybe they were hoping to preserve the surprise, but it’s almost a soap law that we usually see the conception. In addition, there’s not much of a reason for Brady to know in advance. There would be no need to relay the news. If Nicole is expecting, she would’ve found out on her own soon enough.

On the other hand, a baby would give Nicole a glimmer of light after all of the darkness. It would be nice to see Nicole happy for once. Nicole could definitely use something positive in her life right now. We shouldn’t count out a pregnancy just yet, but let’s set that idea aside for the time being. There are other routes to consider.

Another option might be that Brady will start to have feelings for Nicole. It would be quite soapy if Brady fights to remain committed to Theresa (Jen Lilley), but Nicole is the one his heart wants. Brady and Nicole have a history together, so a reunion isn’t entirely out of the question. Perhaps Brady’s dreams will have a romantic overtone.

Option number three could be that Daniel’s heart will urge Brady to comfort Nicole and steer her toward a different love interest. Daniel may want Nicole to let go and move on. In an interview with About.com, Arianne Zucker hinted that she was in a new pairing with someone she doesn’t know very well. Alexander Bruszt, who plays Fynn, would probably be the most logical candidate.

Whatever happens, it sounds like an intriguing concept that could create some heartfelt and potentially awkward situations. “Days of Our Lives” viewers will be anxious to see what’s in store. Stick with the NBC soap for updates on how Brady will react to his peculiar dreams.

So “Days” fans, what do you think about Brady experiencing Daniel’s emotions because of the heart transplant? Could Nicole be pregnant or will Brady’s dreams be romantic in nature? Will Nicole eventually end up with Fynn? Voice your opinion in the comments below and don’t forget to check CDL often for the latest “Days of Our Lives” spoilers, updates and news.