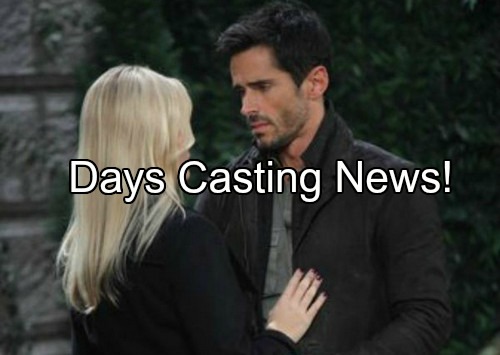 Days of Our Lives (DOOL) spoilers tease that Chad (Billy Flynn) will have a tempting proposal for Belle (Martha Madison). Chad has been struggling to cope since he got confirmation on Abigail’s (Kate Mansi) “death.” He asked Belle to be his lawyer as he fought keep custody of Thomas, but they’ve formed a nice friendship as well.

Belle was there for Chad after he had his breakdown at the mansion. Later, he suddenly had a moment of clarity. Chad intends on rebuilding DiMera Enterprises as a legitimate company. He insisted that it’s what Abigail would want. Plus, giving Thomas a legacy will help Chad feel like he’s finally moving forward.

Chad already asked Belle to help him out, but a more formal offer will soon be on the table. Belle will be intrigued, but there’s a catch. Accepting the position will mean relocating to Hong Kong. Belle will have to mull this over and talk to Shawn (Brandon Beemer) before she makes a decision.

Meanwhile, Shawn will run into a problem at work. His supervisor will rip into him over an error. Days spoilers reveal that Shawn will get discouraged by the scolding. Apparently, this isn’t the first time he’s been chewed out on the job.

Shawn will wonder if he really belongs at the Salem PD. He’ll confide in Hope (Kristian Alfonso) and she’ll urge her son to do whatever he feels is best. Hope will always support Shawn and his choices. Of course, this works out perfectly for Belle. Shawn is down in the dumps and will likely be open to a new adventure.

It sounds like Shawn and Belle will decide to leave for Hong Kong together. However, DOOL made a contract mistake when they fired Brandon Beemer. They were going to have to pay Beemer anyway, so they brought him back to tape more episodes.

It appears Belle will remain in Hong Kong when Shawn comes home. Maybe Shawn will return for something related to Claire (Olivia Rose Keegan). We know she’ll be sticking around. Hope will need to lean on Shawn, too. She has some rough weeks ahead of her thanks to Aiden (Daniel Cosgrove).

Days of Our Lives spoilers indicate that Belle will eventually come back to Salem, but it’s starting to look like it won’t be a lengthy stint. Perhaps Belle will usher Shawn off canvas like Days originally planned. If so, it’s a shame! Belle and Shawn have been useful characters over the past few months.

Philip (John-Paul Lavoisier) will also be heading out down the road. He was fired and has taped his last scenes. There have been some rumblings about the possibility of Jay Kenneth Johnson reprising the role, but nothing has been confirmed yet. They may just decide to let Philip fade out right along with Belle and Shawn.

We hate to lose so many characters from this age group, but sometimes that’s just how it works out. Nevertheless, Days of Our Lives will undoubtedly find ways to keep us entertained. Several major returns are coming soon. We’ll give you updates as other news emerges. Stay tuned to DOOL and don’t forget to check CDL often for the latest Days of Our Lives spoilers, updates and news.