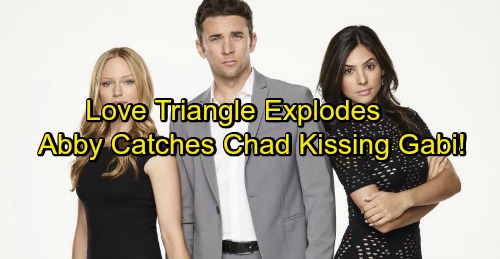 Days of Our Lives (DOOL) spoilers tease that Chad (Billy Flynn) will wonder if he should truly move on. It’s taken Chad a long time to get over losing Abigail (Marci Miller), but he’s made a lot of progress. Chad will always love Abby, but he’s starting to think he could have something new with Gabi (Camila Banus).

DOOL fans know that Gabi and Chad have been growing closer lately. They shared a kiss as part of a ruse to appease an investor’s wife. The scenario was fake, but the sparks were real. Now that Gabi and JJ (Casey Moss) have broken up, Chad has a window of opportunity.

Although it’s tough for Chad to leave Abigail in his past, he may finally be ready to do that. Chad will at least want to talk this over with Gabi. Days of Our Lives spoilers say Chad will hope that they can discuss how their friendship has evolved. It’s clear that Gabi is more to Chad than a pal and image consultant.

Gabi’s breakup is still fresh, but she definitely has feelings for Chad. Days spoilers suggest that Gabi will be confused about the whole situation. Her emotions are all over the place and she just doesn’t know what to do. Chad might insist that he’s in the same boat. Dating as a widower is new to him.

Of course, Chad doesn’t realize that Abigail isn’t dead after all. Abby is simply hiding out and observing Chad’s budding romance. During a chat with Jennifer (Melissa Reeves), Abigail tearfully confessed that this was what she wanted. She didn’t like the idea of leaving Chad to pine for his crazy wife forever.

However, Abigail later learned that she’d been misdiagnosed. The proper treatment has allowed her to reclaim her sanity. That doesn’t mean Abigail wants to jump back into motherhood and her marriage. Abby is worried that she could relapse and become a burden to her family.

At the same time, watching Chad move forward with Gabi could be brutal. Chad was the love of Abigail’s life and he felt the same way. Days spoilers say Abby won’t be sure Chad thinks of her like that anymore. She’ll mull over what she should do about this predicament.

Meanwhile, Chad will have a deep conversation with Andre (Thaao Penghlis). Days of Our Lives spoilers state that Chad will open up to his brother about Gabi. He’ll reveal that he really cares about her. Andre will probably push Chad straight into Gabi’s arms. He wants to convince Abigail to hit the road.

Unfortunately, the jig will soon be up for Andre. Once Chad gets updates on the plot to fake Abigail’s death, Andre is going to pay the price. Until then, we can watch Gabi and Chad’s chemistry explode. DOOL spoilers indicate that they’ll end up sharing a passionate kiss.

Will Abigail have a front-row seat for their lip lock? Regardless, this love triangle is just getting started. We’ll keep you posted as other news comes in. Stay tuned and don’t forget to check CDL often for the latest Days of Our Lives spoilers, updates and news.