‘Days of Our Lives’ Spoilers: Chad Struggles With Giving Up Thomas, Lucas and Adrienne Move In – Sonny Lends a Hand 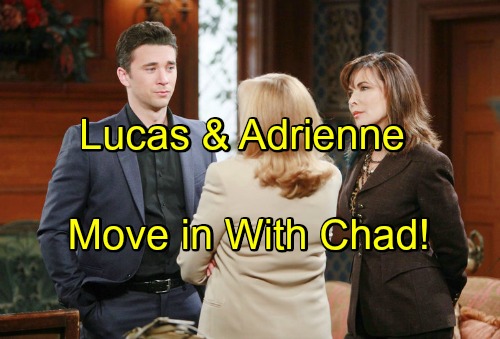 Days of Our Lives (DOOL) spoilers tease that doubt will start to creep in for Chad (Billy Flynn). He’s been trying to decide what’s best for Thomas, but it hasn’t been easy. There just isn’t a clear-cut answer.
Jennifer (Melissa Reeves) doesn’t think Thomas needs to be in Chad’s care right now. Chad is equally as adamant that Jennifer’s home is no place for his child. She recently relapsed and there’s always the chance that it could happen again.

Many DOOL viewers feel like this storyline is kind of ridiculous. It’s not like Thomas has been living in squalor. As far as we can tell, Thomas looks happy and healthy. His diapers are changed, he’s well-fed and he enjoys plenty of warm moments with Chad.

We’re not really seeing the problem here. Sure, Chad has an outburst from time to time. That’s to be expected. Chad just lost the love of his life. Abigail’s (Kate Mansi) death hit him hard, but he’s learning how to cope. Thomas hasn’t been exposed to any of Chad’s major meltdowns anyway.

Plus, why can’t a nanny or two be called in? Chad fired Ciara (Vivian Jovanni) and rightly so, but we’re not talking about a teenage babysitter. What about an actual nanny with the proper credentials? This Days plot is a bit contrived, but we’ll just have to accept that it is what it is.

Chad made the decision to hand Thomas over to Lucas (Bryan Dattilo) and Adrienne (Judi Evans) for a while. However, he’ll begin to have second thoughts about Thomas living somewhere else. Chad wants to be a hands-on dad and he won’t believe he can do that if Thomas is across town.

Days of Our Lives spoilers say Chad may try to back out of the agreement, but an alternative will be offered. Lucas and Adrienne will agree to move in with Chad so he can stay close to Thomas. You’ve heard of Full House. Well, this is Full Mansion. Chad is a regular Danny Tanner with all of this support.

Unfortunately, some unexpected tension will arise thanks to Laura’s (Jaime Lyn Bauer) return. She’ll end up ripping into Chad and the encounter will leave him unsettled. Chad is growing weary from the constant drama.

Days of Our Lives spoilers state that Sonny (Freddie Smith) will stop by to check on Chad. He’ll find him in desperate need of a friend. Sonny will suggest that they should get a little fresh air. He’ll think a nice walk will do Chad some good.

Sonny will encourage Chad to open up about the struggles he’s facing. Once Chad has vented, Sonny will chime in with his own thoughts on the matter. He definitely understands what Chad is going through. Will (Guy Wilson) was murdered last fall and Sonny was devastated.

Days spoilers say Sonny will assure Chad that he’ll get through this. Of course, everything will change when Abigail shows up alive this November. We’ll give you updates as more news comes in. Stay tuned to DOOL and don’t forget to check CDL often for the latest Days of Our Lives spoilers, updates and news.

“Winning at some mini cornhole before our interview!” – @missyreeves #DAYS

“We’ve had fun with you today, Nashville! Can’t wait to see all your beautiful faces tomorrow from 10-5 at the Wildhorse Saloon for our fan event.” – Bryan Dattilo #DAYS