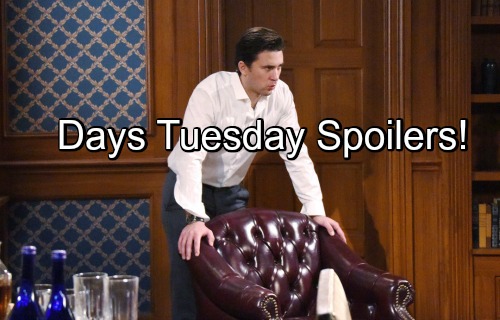 Days of Our Lives (DOOL) spoilers for Tuesday, October 4, tease that the Kiriakis family will try to rectify their mistakes. They received some bad intel and it led to an unsuccessful raid. Unfortunately, it seems Titan Industries could be affected.

They’ve been neglecting the corporation anyway thanks to the fugitives. If they add negative press on top of that, it could put a serious dent in their business. Days spoilers say Deimos (Vincent Irizarry), Philip (John-Paul Lavoisier), Justin (Wally Kurth), Sonny (Freddie Smith) and Brady (Eric Martsolf) will do damage control.

They’ll hope that they can put this incident behind them and move on.

Sadly, Andre (Thaao Penghlis) is waiting to pounce on their error. The Kiriakis clan’s loss could be the DiMeras’ gain. Days of Our Lives spoilers reveal that Andre will have a chat with Chad (Billy Flynn) about capitalizing on this business opportunity. He’ll want to turn Titan’s problems into major profit for DiMera Enterprises.

Chad will initially think this sounds like a terrible idea. He’s been trying to pull the company off its typically shady path. Chad will state that this underhanded strategy just doesn’t fit with his vision. Andre might point out that Thomas could miss out on a legacy if Chad isn’t careful.

DiMera Enterprises isn’t doing well and they need to give this a shot if they want to turn things around.

DOOL viewers know that Sonny and Chad are close friends. Chad obviously won’t want to hurt Sonny or his family. Nevertheless, business is business. Andre will contend that sometimes you have to keep personal feelings out of it. Chad will eventually cave in and that means he’ll have to face Sonny’s wrath pretty soon.

In the meantime, we’ll see conflict for Justin and Adrienne (Judi Evans). He doesn’t approve of his ex’s current living arrangement. Days of Our Lives spoilers indicate that Justin will order Adrienne to move out of the DiMera mansion. He’ll think it’s much too risky. Adrienne will undoubtedly argue that she’s fine.

Besides, Lucas (Bryan Dattilo) is there to watch out for his fiancée. That has to sting for Justin. As Eve (Kassie DePaiva) mentioned, Justin still cares a great deal about Adrienne. Days spoilers suggest that Justin’s love will continue to grow in the coming weeks.

Will Justin try to stop Lucas and Adrienne’s wedding? Time will tell, but it’s clear that Justin’s feelings could stir up trouble. Elsewhere, Gabi (Camila Banus) will get a huge shock. When she helps a pal get rid of looters, one of them will catch her eye.

There’s a good chance that Dario (Jordi Vilasuso) will be involved in all of this. We wouldn’t put it past Dario to rob some local businesses, but the guy who mugged Gabi might be another option. If Gabi turns in Dario’s secret helper, he’ll probably sing like a canary.

Either way, you can expect Gabi to give her brother a stern lecture. Is the whole truth about to come out? We’ll provide updates as more news comes in. Stay tuned to DOOL and don’t forget to check CDL often for the latest Days of Our Lives spoilers, updates and news.

“After I’m finished with you, I’m gonna get my grandson and I’m gonna take him out of Salem for good.” #DAYS pic.twitter.com/d9ufhv21G8