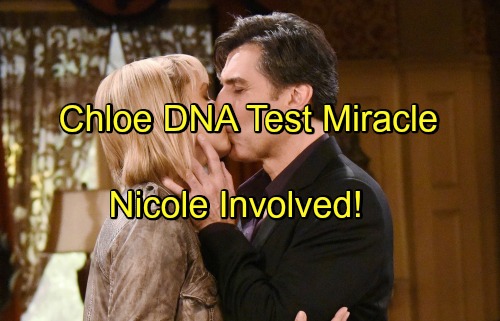 Days of Our Lives (DOOL) spoilers tease that huge twists are coming up on the NBC soap. We just had a big one when Chloe (Nadia Bjorlin) found out Deimos (Vincent Irizarry) wasn’t the father of her baby. Later, Chloe had a light bulb moment and she now thinks she’s found the explanation.

What exactly did Chloe figure out? We have a few possibilities here. Some Days viewers believe Chloe realized that Kate (Lauren Koslow) could be lying. Honestly, that seems too simple. This storyline is surely about something more exciting than a fib.

Besides, it genuinely looked like Kate missed her window of opportunity thanks to Clyde (James Read). The doctor even handed over extra blood samples for Deimos to have tested himself. There was a lot of preparation that Kate probably wouldn’t have had time to go over with the doc.

So what else could Chloe have realized? Perhaps she’s thought of another test-tampering culprit. The extra blood samples could still be a problem though. The doctor owed Kate a favor and she could’ve have talked him into lying. Anyone else would’ve had to tamper with the actual test and that means the extra samples may not have been affected.

In other words, the truth would come out anyway. DOOL spoilers have been saying that there would be a shocking outcome down the road. That might eliminate Deimos as the true father since he wouldn’t be shocking at all.

It’s possible that Chloe had a drunken hookup with someone like Dario (Jordi Vilasuso) or Brady (Eric Martsolf), but she doesn’t remember the actual sex. However, that wouldn’t make much sense. Brady appears to be devoted to Theresa (Jen Lilley) and based on future Days spoilers, Dario may not be involved in this mess for much longer.

This is a real headscratcher, but there’s another solution to think about. Admittedly, this one is a little wild. Days of Our Lives has been bashing us over the head with the fact that Nicole (Arianne Zucker) can’t have a baby. Baby this and baby that…baby, baby, baby! Nicole has been standing by Chloe throughout this ordeal and even intends on being the child’s godmother.

What if Chloe’s baby isn’t really hers? Could we be dealing with an in vitro fertilization story? Maybe Daniel (Shawn Christian) wanted to surprise Nicole with a child, but didn’t want to get her hopes up. He could’ve asked Chloe to be a surrogate, but never mentioned it to Nicole after it seemingly failed.

The timing is a bit of an issue since Daniel died in January, but maybe Chloe followed through with his wishes after his passing. There could been some sort of delayed implantation or testing mistake that made Chloe think she wasn’t pregnant at the time. Then again, perhaps some twisted individual did this to a drugged Chloe without her knowledge. Who and why? It’s not clear.

We do know that Nicole’s past will be tied into all of this. It’s just tough to connect the dots. This plot sounds pretty ridiculous, but so did Kristen’s (Eileen Davidson) decision to steal Theresa’s embryo. That’s just how soaps roll sometimes.

Due to Nadia Bjorlin’s maternity leave, Chloe was written off canvas for a while. She’ll be headed out October 3, but her return to Days of Our Lives will bring answers. We’ll give you updates as more news comes in. Stay tuned to DOOL and don’t forget to check CDL often for the latest Days of Our Lives spoilers, updates and news.

The results are in! Chloe’s paternity struggle intensifies on the latest #DAYS: https://t.co/T880QlLWLt pic.twitter.com/wgzKj2Q00K