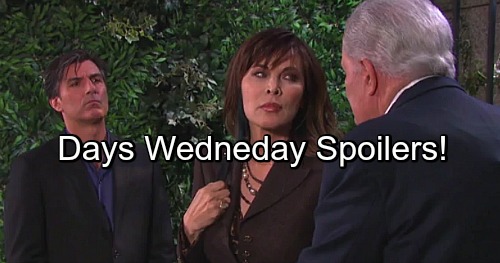 Days of Our Lives (DOOL) spoilers for Wednesday, September 7, tease that Chad (Billy Flynn) will have big plans for the future of DiMera Enterprises. Now that Chad and Jennifer (Melissa Reeves) have resolved their custody issues, their lives should settle down slightly. Since Lucas (Bryan Dattilo) and Adrienne (Judi Evans) will be around to take care of Thomas, they can all breathe a sigh of relief.

Chad will still get the chance to be a hands-on dad, but he wants to do something else for his son. Days of Our Lives spoilers say Chad will turn his attention back to the company. He already asked Belle (Martha Madison) to join his team and Kate (Lauren Koslow) is about to get an offer as well.

Chad will describe his vision and hope that Kate can help him achieve his goals. If you’re looking for a hardworking businesswoman, you won’t find one more dedicated than Kate. She’s incredibly driven and she knows what works in the corporate world.

Unlike Stefano (Joseph Mascolo) and Andre (Thaao Penghlis), Chad isn’t interested in trying to get ahead through illegal means. He wants to legitimize DiMera Enterprises and make it something Thomas can be proud of. This is Thomas’ legacy and Chad will believe Kate can help him repair the damage.

Meanwhile, Deimos (Vincent Irizarry) and Victor (John Aniston) will plot Kate’s downfall. Thanks to Nicole’s (Arianne Zucker) info, the Kiriakis brothers will figure out that Kate is to blame for Tate’s kidnapping. They’ll concoct a scheme to trap Kate and expose her ruthless actions.

Unfortunately, DOOL spoilers hint that Kate will be prepared for whatever they throw her way. Victor and Deimos will have to rethink their strategy after Kate drops a major bomb. Stick with Days of Our Lives to watch Kate play dirty.

Elsewhere, Maggie (Suzanne Rogers) won’t know what to do about Deimos’ suggestion. He urged Maggie and Victor to move back in the mansion with him, but she won’t be sure that’s a good idea. Deimos appears to be changing his ways, but this is still the same man who led to Maggie’s paralysis. He also played a role in Bo’s (Peter Reckell) imprisonment, but Days is apparently ignoring that.

In other words, no one will probably ever consider Deimos to be truly trustworthy. Nevertheless, it seems Maggie will decide to take a leap of faith as some point. At least Deimos tried to make things right. That has to count for something.

In recent set pictures, there was a framed photo of Victor and Maggie in the living room of the Kiriakis mansion. It sounds like this couple will indeed be returning to their former home. So long cramped townhouse! Victor will be pleased to get back to the fancy manse.

In prison, Days spoilers reveal that Clyde (James Read) and Orpheus (George DelHoyo) will continue to click. These two just really understand each other. Orpheus will elaborate on his deep need for revenge and Clyde will totally relate. Just like that, an alliance is born.

DOOL viewers can expect a wild ride once Xander (Paul Telfer) joins the vengeance party. Their prison break will have catastrophic results. We’ll give you updates as other news emerges. Stay tuned and don’t forget to check CDL often for the latest Days of Our Lives spoilers, updates and news.