‘Days of Our Lives’ Spoilers: DiMera and Kiriakis Feud Reignites, Epic Battle Ahead – Eduardo and Dario Enter the Fray 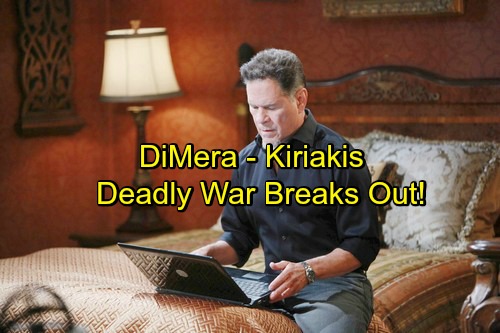 Days of Our Lives (DOOL) spoilers tease that Eduardo (A Martinez) will feel like he can’t hang around and put the lives of his family members in danger. He’ll make a tough decision to ensure their safety. Days spoilers state that Eduardo will call everyone together to discuss his plans.

Eduardo will announce that he intends on leaving Salem. Gabi (Camila Banus) will be particularly upset by the news. She may gripe that Eduardo already abandoned them once and there’s no reason for him to do it again. Eduardo will maintain that this is for their own good. He wouldn’t be able to live with himself if a loved one ended up dead because of him.

However, DOOL fans know that the latest threat is actually Dario’s (Jordi Vilasuso) scam. This is exactly the reaction he was hoping for. Unlike the rest of the Hernandez brood, Dario just hasn’t warmed up to his father. Nevertheless, things could begin to shift.

Most Days secrets come out eventually and that means Dario could land in hot water. Eduardo is a pretty forgiving guy though. He understands why his family has been reluctant to accept him. Instead of hitting the road and leaving Salem behind forever, Eduardo will stay and grow closer to his wary son.

Days of Our Lives spoilers suggest that Dario and Eduardo will start a company together. They’ll hope to become corporate big shots in Salem. It should be a great opportunity for Dario to use his business skills. Dario’s talents have been wasted during his bartending stints.

Of course, Dario will find time to do a few shady activities on the side. He’s not going to ditch his sneakiness completely, but he’ll likely back off Eduardo. Their partnership could give them a chance to truly bond.

Eduardo and Dario’s corporation should be competing with the other major companies in town. They may get caught in an epic rivalry that’s about to be reignited. Days of Our Lives viewers are aware of the feud between the Kiriakis and DiMera families. These clashing clans will soon be at it again.

There’s no word yet on the why the next round of conflict will break out. It’s anybody’s guess who will fan the flames. Regardless, you can bet that some intense showdowns are ahead. Chad (Billy Flynn) will throw himself into work in an effort to cope with his grief. Andre (Thaao Penghlis) will undoubtedly want to protect their dynasty, too.

The DiMera brothers may get help from surprising sources as this war heats up. Meanwhile, Sonny (Freddie Smith) will get involved at Titan Industries. Now that Justin (Wally Kurth) is out of a job, he’ll probably join in as well. It sounds like a real family affair.

Will the Kiriakis family come out on top or will the DiMeras prevail instead? How will the Hernandez men factor in? We’ll give you updates as more details emerge. Stay tuned to DOOL and don’t forget to check CDL often for the latest Days of Our Lives spoilers, updates and news.