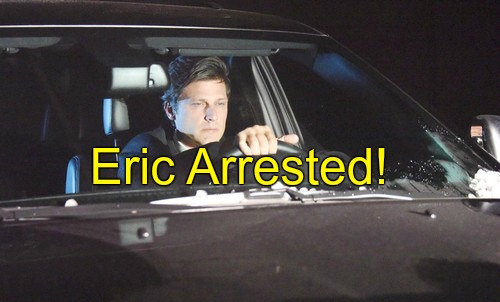 “Days of Our Lives” spoilers reveal that Eric’s (Greg Vaughan) condition will improve and he’ll be released from the hospital. Marlena (Deidre Hall) has been worried about what’s going to happen to Eric once he’s discharged. However, Marlena knows that Eric is ready to stand before a judge and take his punishment. In fact, it might help Eric deal with the fact that he led to Daniel’s (Shawn Christian) death.

DOOL spoilers indicate that the cops will show up to arrest Eric as he’s preparing to leave the hospital. It will certainly be a somber moment, but Eric will believe this what he deserves. Eric didn’t mean to kill Daniel, but he still needs to pay the price for his actions.

Instead of waiting for a taxi like Nicole (Arianne Zucker) suggested, Eric got behind the wheel while inebriated. Now Daniel is dead and the lives of his loved ones have been changed forever. It seems likely that Eric is destined for a long stint in prison or at least rehab once Greg Vaughan’s last air date rolls around. Vaughan is scheduled to remain on screen through mid-April.

Fortunately, Eric’s fate could be good news for many “Days” viewers. When someone tweeted Vaughan about how fans were going to miss him, his response was hopeful. Vaughan replied, “Never say never!” Since Eric presumably won’t be killed off, there’s always a chance that he could return down the road.

Although money was probably a factor, this departure may have been partially influenced by the story as well. Sometimes big sacrifices have to be made for great drama. “Days of Our Lives” characters can occasionally be written into a corner. When that happens, there’s just nowhere else to go. In other words, it’s time to start sending people off canvas.

As new storylines present themselves, rested characters can always be thrown back in the mix. Look at what happened with Shawn (Brandon Beemer) and Belle (Martha Madison). Their 2008 exits were reportedly driven by the story and budget cuts.

Now Beemer and Madison are back at DOOL. Shawn and Belle poised to be involved in a major plot moving forward. It just goes to show you that it’s never really over in the soap biz. Stick with “Days of Our Lives” for updates on the Eric’s exit and his uncertain future.

So “Days” fans, what do you think about the news that Eric will be arrested for his role in Daniel’s death? Will Eric be sent off to prison or rehab? Do you have hope that Greg Vaughan might return as Eric one day? Voice your opinion in the comments below and don’t forget to check CDL often for the latest “Days of Our Lives” spoilers, updates and news.