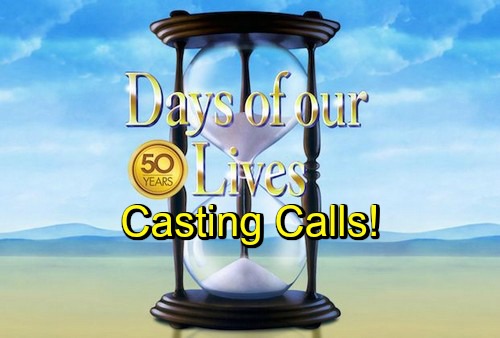 Days of Our Lives (DOOL) spoilers tease that the NBC soap is adding some new characters. Several casting calls just went out for short-term roles in Salem. For starters, Days plans on bringing in a “spunky con artist” named Tiffany. Soap Opera Digest is reporting that Tiffany will be somewhere in the 23-26 age range.

Tiffany certainly sounds like a troublemaker. Summer (Marie Wilson) recently left for parts unknown, but Salemites should still beware of scams. There could be some major swindling going on once Tiffany starts hanging around. Days of Our Lives fans will anxious to see what Tiffany has in store.

Next, we have Toby. This 35-year-old loafer is said to be a “drain on society.” Due to Toby’s tendency to mooch off everyone else, he really can’t be trusted. However, Toby may not cause significant turmoil. He seems too lazy to pull off any elaborate stunts.

DOOL spoilers say Russ is another character to watch out for. He’s a 30-35-year-old man who knows all of Salem’s dirty little secrets – at least the illegal ones. Because he’s seemingly all-knowing, Russ is bit on the tense side. Tension is the norm on Days of Our Lives, so Russ should fit right in.

Russ is also quite menacing, but that just comes with the unlawful territory. If you’re going to keep tabs on criminals, you’d better be willing to toss around a threat or two Perhaps Russ will be the lackey of a bigwig like Victor (John Aniston) or Andre (Thaao Penghlis).

If not, Russ had better watch his back. Someone could take him out if he knows too much. Liabilites don’t last long in this town. Villain wannabes usually end up six feet under if they aren’t careful. Stick with Days of Our Lives to see if Russ will ruffle any feathers.

We’ll cap things off with a touch of class. DOOL needs someone to play Grigor, an upscale gentleman from Eastern Europe. They’re looking for a 50-60-year-old male to portray this sophisticated jetsetter. Maybe Grigor will be swindled or caught in tight spot with one of the aforementioned hoodlums.

Whatever the case, Grigor will likely be stuck in a mess of some sort. Will a current character be involved? This might even tie in with an investigation at Black Patch. There are plenty of possibilities here. It should be interesting to see what Days of Our Lives comes up with.

Again, these roles are set to be short-term. There’s a chance that the actors could impress DOOL and become regulars, but we wouldn’t bet on it. All of these characters sound like plot points. That’s OK though. We always need throwaway guys and gals to propel the show in surprising directions.

Of course, Days has some shocking returns planned as well. Many of them haven’t been announced yet, but more news should be coming out soon. We’ll give you updates as details emerge. Stay tuned and don’t forget to check CDL often for the latest Days of Our Lives spoilers, updates and news.