Days of Our Lives (DOOL) Spoilers: Hope Gets Shocking Phone Call, Learns Yo Ling and Deimos to Blame for Bo’s Demise 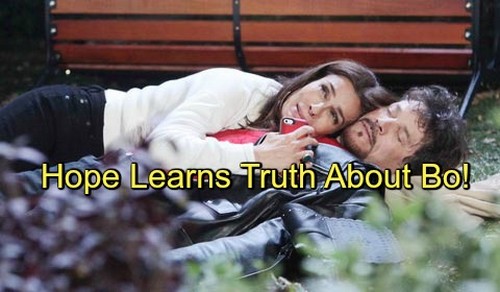 “Days of Our Lives” spoilers reveal that Hope (Kristian Alfonso) will get shocking news on Thursday’s episode this week. A phone call will lead to jaw-dropping revelations. Since John just learned Yo Ling (Tobin Bell) hired Deimos (Vincent Irizarry), perhaps Hope will get updates on this new development.

If so, you can bet that Hope will feel even guiltier. She’s already filled with regret for killing the wrong man.

Stefano (Joseph Mascolo) was undoubtedly a ruthless villain and he had plenty of previous transgressions. The DiMeras have tormented Hope and her family for years. Nevertheless, Hope is going to feel terrible when she realizes her worst fears are true.

“Days” spoilers suggest that Hope will likely need Rafe’s (Galen Gering) support as she continues to work through this crisis. DOOL viewers know that Hope was driven to her breaking point after Bo’s (Peter Reckell) death.

She was determined to make Stefano pay for holding Bo hostage and denying him the chance to get an earlier diagnosis.

Hope will be distraught when she discovers that Yo Ling deserved the bullet instead. Of course, Deimos was instrumental in all of this as well. Yo Ling told Deimos to do whatever it took to get the serum formula. Deimos was the one who put the plan into action.

Will Hope take on a second revenge mission or has she finally learned her lesson? Since Ciara (Vivian Jovanni) needs her mom more than ever, maybe Hope will understand that she needs to focus on her family instead of vengeance. It’s time to make Ciara the top priority.

Meanwhile, “Days of Our Lives” spoilers say Nicole (Arianne Zucker) and Dario (Jordi Vilasuso) will grow closer on Friday’s episode later this week. Nicole is still struggling with her grief over Daniel’s (Shawn Christian) death and she could use someone to talk to.

It looks like this is the beginning of a strong friendship, but it could easily lead to something more.

Unfortunately, DOOL buzz hints that Dario could have some dark secrets. Is this new relationship doomed from the start? Stick with “Days of Our Lives” to find out if Nicole’s heart will be broken once again.

So “Days” fans, what do you think about the shocking phone call Hope will receive? Will it be about Yo Ling’s involvement in Bo’s capture? What does the future hold for Dario and Nicole? Will it only lead to more heartbreak?