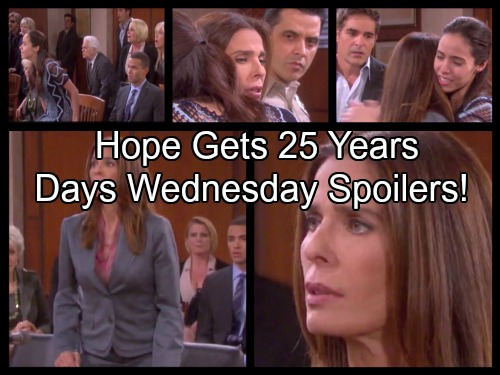 Days of Our Lives (DOOL) spoilers for Wednesday, November 16, tease that Andre (Thaao Penghlis) and Chad (Billy Flynn) will have a chance to speak out during Hope’s (Kristian Alfonso) sentencing. They’ll be able to share how much suffering Hope’s actions have caused. Stefano’s (Joseph Mascolo) death really hit these brothers hard.

The DiMeras have faced some tough losses over the last few years. EJ (James Scott) and Kristen (Eileen Davidson) both bit the dust, but Stefano’s murder was perhaps the most devastating blow of all. Days of Our Lives spoilers say Andre won’t hesitate to blast Hope for the pain she created.

Chad may tame his rage for the sake of Hope’s family, but he’ll still struggle to accept what she did. Once Andre and Chad give their statements, Justin (Wally Kurth) will make one more plea. He’ll beg the judge to have compassion on Hope and consider the circumstances she was forced to tackle.

Days fans know that Hope was a fragile woman at the time of Stefano’s murder. All of Hope’s grief led her to that fateful moment. Hope made a huge mistake by confronting Stefano and pulling the trigger, but Justin will suggest that they need to look at the big picture.

This week on #DAYS, a shocking murder sentence and a return from the dead keep the town of Salem on edge. pic.twitter.com/Uxn4FctOU6

Stefano’s relentless tormenting had been going on for years. Hope naturally assumed that Stefano was responsible for Bo’s (Peter Reckell) kidnapping. He pulled many similar stunts over the years. Hope’s frustration had been building up and she finally snapped.

That doesn’t justify murder, but it’ll at least be enough to help Hope avoid the death penalty. Days of Our Lives spoilers reveal that Hope will be sentenced to 25 years without the possibility of parole. That’s good news in the grand scheme of things, but it isn’t exactly the outcome Hope or her loved ones want. 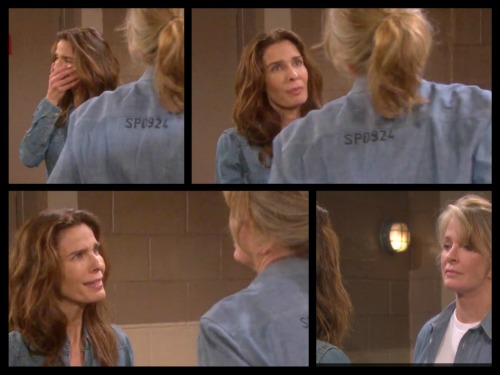 DOOL spoilers indicate that Rafe (Galen Gering) will try to reassure Hope. He’ll insist that they’ll keep looking for a way to free her. Justin will also vow to file an appeal that could knock Hope’s sentence down. Hope will have plenty of friends and family members in her corner, but nothing will provide much comfort as she heads behind bars.

Other Days spoilers say Brady (Eric Martsolf) will be stunned when he discovers Theresa (Jen Lilley) in a compromising position. It sounds like Theresa may create a fake cheating scenario or something along those lines. Brady will lash out at Theresa, but it won’t solve the problem. Theresa is determined to drive Brady away so Mateo (Andoni Gracia) will leave him alone.

Some heartbreaking scenes are coming up as Theresa begins the final phase of her plot. She’ll be leaving Salem on Friday and Brady will undoubtedly be crushed. After Theresa is gone, Brady will find himself in an incredibly dark place.

It sounds like some great material is in the works. We’ll give you updates as other info comes in. Stay tuned to DOOL and don’t forget to check CDL often for the latest Days of Our Lives spoilers, updates and news.

.@billymflynn knows how to give the people what they want. #DAYS. pic.twitter.com/Svn7sYVdSG

In the latest episode of #DAYS, Abigail is discovered. https://t.co/H2Wx3EFLXR pic.twitter.com/EH5t5IlRR0