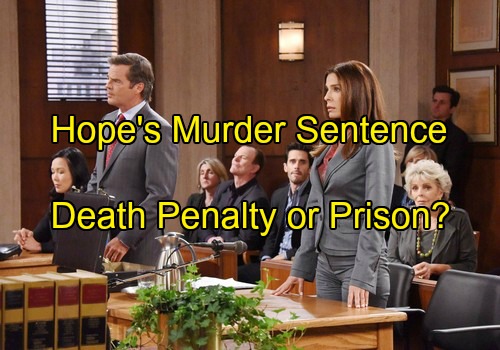 Days of Our Lives (DOOL) spoilers tease that Hope (Kristian Alfonso) will head to court for her sentencing. She recently learned that the prosecutor would likely pursue the death penalty. Hope is definitely worried about her future. She believes she’s reached the end of the road.

It’s clear that Hope is going to be punished. We just don’t know how harsh it’ll be yet. Days of Our Lives spoilers say Hope will share a tender moment with Rafe (Galen Gering) before she learns her fate. Rafe will promise to fight for Hope, even after the judge delivers a decision.

Hope will feel like this is a final goodbye. She just won’t see how Rafe could ever get her out of this jam. When Hope kisses Rafe, she’ll truly believe she’s saying farewell forever. Meanwhile, Justin (Wally Kurth) will try to be as prepared as possible. Unfortunately, some things are out of his control.

Justin doesn’t know if this judge will respond with compassion or coldness. After all, Hope’s crime was pretty brutal. She pumped several bullets in an elderly man who couldn’t defend himself. Stefano (Joseph Mascolo) was a cruel criminal, but that didn’t give Hope the right to gun him down. Hope was a distinguished detective and she should’ve known better. 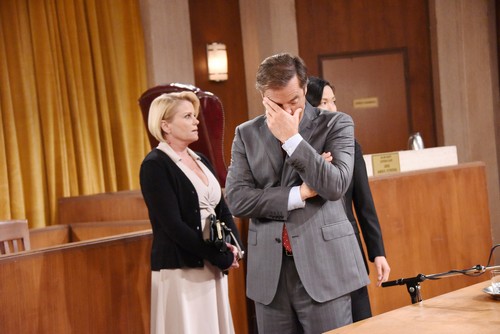 On the other hand, Hope had faced enough drama for a lifetime in the months leading up to the murder. Days fans know that Hope was nearly killed by Aiden’s (Daniel Cosgrove) lookalike. Bo (Peter Reckell) saved the day, but died a short time later. It was a horrible ordeal.

Hope was so consumed by grief that she couldn’t think straight. She believed Stefano was responsible for Bo’s kidnapping and that meant he had to pay. Hope only remembers Stefano goading her into the shooting. She doesn’t recall pulling the trigger.

Obviously, this case is a bit tricky. DOOL viewers will be anxious to hear the judge’s thoughts on all of this. Hope certainly isn’t in this alone. Rafe, Roman (Josh Taylor), Doug (Bill Hayes), Julie (Susan Seaforth Hayes) and other loved ones will gather for support.

Naturally, Ciara (Vivian Jovanni) will be there for her mom. Days of Our Lives spoilers indicate that Shawn (Brandon Beemer) will even fly in from Hong Kong. He’ll have a sweet conversation with Hope before she goes to her cell.

Hope will probably ask Shawn to watch out for Ciara while she’s locked up. She’ll feel guilty for leaving Ciara without a parent around. After Bo’s death, Hope insisted that they’d get through this together. She assured her daughter that she’s always have her back.

Sadly, Days spoilers say Hope won’t be able to keep that promise. She’ll hate that she destroyed her life with one terrible mistake. The good news is that Rafe won’t give up on Hope. He’ll recruit Shane (Charles Shaughnessy) and Steve (Stephen Nichols) to work on a plan.

The gang will try to secure Hope’s freedom, but they’ll hit plenty of snags. We’ll give you updates as more details emerge. Stay tuned to DOOL and don’t forget to check CDL often for the latest Days of Our Lives spoilers, updates and news.