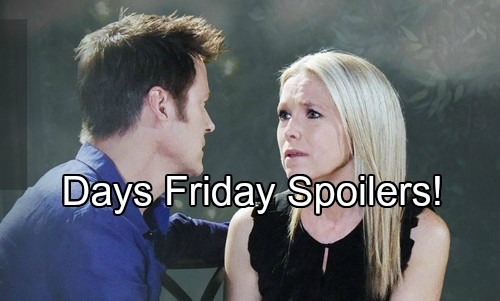 Days of Our Lives (DOOL) spoilers for Friday, August 5, tease that Justin’s (Wally Kurth) mistake will come back to haunt him. When Deimos (Vincent Irizarry) essentially stole everything from Victor (John Aniston), Justin tried to make a deal. He wanted Deimos to give back at least some of what he took.

In exchange, Justin was willing to look the other way if Deimos and any of his associates ever ran into trouble. He suggested that his job as the district attorney could benefit Deimos greatly. Deimos thought about it and gave Justin a test to see if he would truly hold up his end of the bargain.

Justin destroyed some evidence in an important case and regretted it immediately. Now Deimos is returning part of Victor’s fortune anyway, so Justin’s crime was all for nothing. He won’t gain anything from that move. In fact, Days spoilers say Justin’s career could soon be at stake.

Aiden (Daniel Cosgrove) clearly has his eye on Justin’s job. DOOL fans know how conniving Aiden can be. Plus, he’s in cahoots with Andre (Thaao Penghlis) again. With an evil DiMera backing him up, Aiden will almost certainly take Justin down.

Days of Our Lives spoilers suggest that Justin will take some serious heat for his actions. He’ll worry that he could be fired or even land in prison. It’s kind of unfair that Justin could pay such a steep price for getting rid of some proof. People like Hope (Kristian Alfonso) and Joey (James Lastovic) have gotten away with far worse crimes.

Of course, Hope may still face consequences for Stefano’s (Joseph Mascolo) murder if Andre has anything to say about it. However, that’s something to save for later. Justin seems to be the next Days character who’s poised for a fall. Keep watching to see how Justin will handle this crisis.

Meanwhile, Chad (Billy Flynn) will tackle a crisis of his own. He’ll get the news that Abigail (Kate Mansi) is dead. We know that Abby is actually alive and will be portrayed by Marci Miller this autumn, but her death will be Chad’s reality for now. After JJ (Casey Moss) gets updates on his sister’s demise, he’ll blow his top. The blame game will likely ensue.

Chad won’t particularly care what JJ has to say. He’ll be too wrapped up in watching his world fall apart. Jennifer (Melissa Reeves) will naturally break down over Abigail’s passing as well. She’ll undoubtedly consider popping some of those pills she found stashed in Thomas’ nursery.

Fortunately, Jack (Matthew Ashford) will show up to console Jennifer in her daydream. He’ll hold Jennifer tight and offer some comforting words. Jen will still be filled with sorrow, but Jack’s presence should help get her through this ordeal.

Jennifer’s mom, Laura (Jaime Lyn Bauer), will be popping up for a few Days of Our Lives episodes in September. Perhaps Laura is coming to support Jennifer and meet her great-grandson. They might even have some sort of memorial service for Abigail.

Heartbreaking moments lie ahead, but things should brighten up a little once Abigail comes home. Many questions linger about Abby’s disappearance. Is she being held against her will? If so, who’s responsible? We’ll keep you posted on the details.