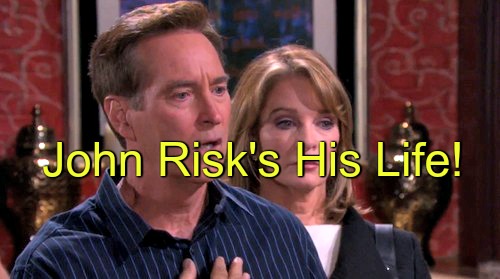 “Days of Our Lives” spoilers (DOOL) reveal that John (Drake Hogestyn) will get fed up with the agency that ordered his death. This is the same organization that made John an assassin in his younger days. It seems they’ve been stirring up trouble for most of John’s life.

Eduardo (A Martinez) has been trying to help John neutralize the threat against him, but that’s just not going to cut it indefinitely. If John lets this go on, he’ll always have to look over his shoulder. John’s family could be in danger, too. With that in mind, John will set out on another perilous mission.

“Days of Our Lives” spoilers tease that John will decide to bring down this mysterious organization once and for all. He’ll want to utterly destroy the ruthless group that molded him into a cold-hearted killer long ago. Of course, taking on an agency like this won’t be easy. The organization trained John and his enemies could know his moves before he makes them.

Nevertheless, John will believe it’s something he has to do. This is about revenge and securing the protection of his loved ones. DOOL spoilers say Marlena (Deidre Hall) will fear that John’s plan could go horribly wrong. It’s clear that the agency already wants John dead.

They’ll likely rev up their efforts if they get any hint of John’s scheme. “Days” viewers will want to stay tuned to see if John can pull off his plot.

On a lighter note, we’ll see some flirting going on in Salem. “Days of Our Lives” spoilers indicate that Fynn (Alexander Bruszt) will take a sudden interest in Lani (Sal Stowers). DOOL is still trying to figure out what to do with these new characters. They might as well put them together and see what happens.

Most of the buzz out there suggests that Fynn will end up with Nicole (Arianne Zucker) down the road. However, that doesn’t mean Fynn can’t have a little fun while Nicole is mourning.

Daniel (Shawn Christian) once pointed out that Fynn was quite a ladies’ man and it appears that trend is continuing. Stick with the NBC soap for updates on how Lani will react to the playful banter.

So “Days” fans, what do you think about the news that John will be determined to take down the organization? Will John’s mission succeed? What about Fynn and Lani’s flirty encounter? Would you be on board with this pairing?