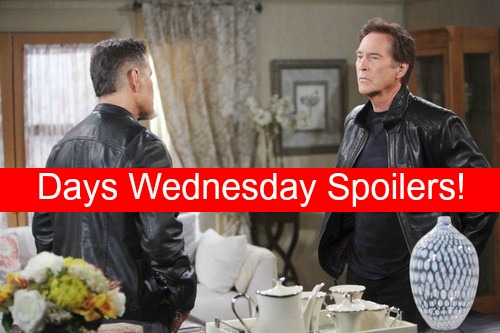 “Days of Our Lives” spoilers for Wednesday, January 13, tease that Melanie (Molly Burnett) will arrive in Salem to prepare for Daniel’s (Shawn Christian) funeral. Daniel’s death was a major blow for Melanie, but she’ll try to step up and help Chloe (Nadia Bjorlin) take care of all the arrangements. Nicole (Arianne Zucker) is certainly in no condition to plan Daniel’s memorial service.

DOOL spoilers say Nicole will continue to be a total mess. Her sorrow will become almost unbearable. Nevertheless, Nicole will have to find a way to carry on. “Days” fans can expect Nicole to struggle, but the pain will become easier to handle in time.

Meanwhile, Eric (Greg Vaughan) will have to face some severe pain as well. “Days of Our Lives” spoilers indicate that Eric’s guilt will consume him. Eric’s foolish decisions resulted in the death of one of his best friends and injured two others.

There could be legal ramifications down the road, but he probably won’t care at this point. Daniel is gone and Eric is to blame. He’ll have to live with that for the rest of his life.

Elsewhere, Eduardo (A Martinez) will deliver shocking news to John (Drake Hogestyn). DOOL viewers know that Eduardo was ordered to kill John, but he’s hoping he’ll be able to change the organization’s mind. Eduardo plans on telling John everything he wants to know about his history.

If they can convince the organization that John just wants details on his past, Eduardo feels they might drop him as a target.

“Days of Our Lives” spoilers reveal that Eduardo will pass along info on John’s mother. John will be stunned when he hears about his mom. He’ll have to wrap his head around everything he’s learned. John will get a chance to meet his mother next week, but you can bet that danger will be lurking. Stick with the NBC soap for updates on the trouble John will encounter.

So “Days” fans, what do you think about Melanie’s return to Salem? Will Nicole eventually push through her grief and put her life back together? Will Eric manage to deal with his guilt? Can John really trust Eduardo? Let us know what you think in the comments below and don’t forget to check CDL often for the latest “Days of Our Lives” spoilers, updates and news.