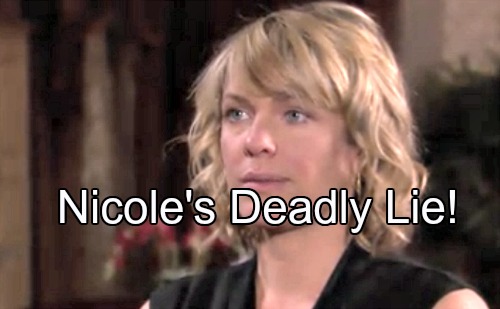 Days of Our Lives (DOOL) spoilers for Thursday, September 1, tease that Chloe (Nadia Bjorlin) won’t be able to hide the truth from Nicole (Arianne Zucker). When Nicole insists that Chloe should come clean, the whole story will spill out. Chloe will admit that she’s carrying Deimos’ (Vincent Irizarry) baby, but Philip (John-Paul Lavoisier) has agreed to pose as the father.

Nicole will be stunned by the secret, but Chloe will explain that she doesn’t trust Deimos. She just doesn’t think it’s a good idea to let Deimos be in her child’s life. Nicole will understand why Chloe is skeptical. It seems Deimos still has some work to do if he wants to undo his damage.

Deimos is manipulative and ruthless at his core. He’s changing his ways for Nicole’s sake, but you can bet his evil qualities could come out at any moment. Nevertheless, Nicole is truly falling for Deimos. She realizes that Chloe and Deimos connected when he visited her in Chicago. Nicole might fear that having a baby would bring them closer.

After mulling it over, Nicole will decide that it would be in everyone’s best interest to keep Deimos out of the loop on his kid. Of course, Deimos is already suspicious. He has no intention of letting this go.

Days of Our Lives spoilers say Deimos will pay Dario to find out what’s really going on. He’ll ask him to spy on Chloe and learn the true identity of the baby’s father. It sounds like secrets could cause problems for the whole crew. DOOL viewers will be anxious to see how things turn out.

In the meantime, Deimos will continue his efforts to make amends. Days of Our Lives spoilers state that Deimos will contact Justin (Wally Kurth) to offer an apology. When Deimos was going after Victor (John Aniston), Justin tried to help by proposing a deal. Deimos forced Justin to do some of his dirty work as a test.

Unfortunately, Justin’s actions came back to bite him. Aiden (Daniel Cosgrove) discovered that Justin destroyed evidence and quickly pushed him out of the district attorney position. Days spoilers say Deimos will insist that he’s sincerely sorry, but Justin won’t be in a forgiving mood.

Across town, Philip will ask Kate (Lauren Koslow) for a favor. Now that he’s dropped Belle (Martha Madison) as an investor, Philip needs someone else to back his record label. He doesn’t want his company to go under before it ever has a chance to achieve success.

Philip will wonder if Kate would be willing to supply some financial support. Kate might agree to write Philip a check, but she rarely does anything without wanting something in return. There may come a time when Kate will need Philip to cover for her. Kate is involved in several twisted plots and all of them could backfire pretty soon.

Days fans will want to stay tuned for the shockers ahead. We’ll give you updates as more news emerges. Stick with DOOL and don’t forget to check CDL often for the latest Days of Our Lives spoilers, updates and news.