‘Days of Our Lives’ Spoilers: Pregnant Chloe Ponders Paternity, Could Baby Daddy Be Philip or Deimos? 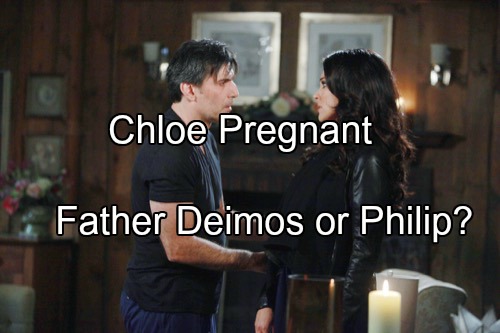 Days of Our Lives (DOOL) spoilers reveal that changes are on the way for Philip (John-Paul Lavoiser). We’re about to see major shifts in the coming weeks. In an interview with Soap Central, John-Paul Lavoiser discussed his time at Days so far and offered some hints on what’s to come.

Longtime soap fans might remember Lavoiser as Rex on One Life to Live, but he was quick to point out that DOOL has been a totally different experience. However, there’s one similarity that Lavoiser couldn’t deny. Lavoiser said, “…I’m just shocked I can memorize all of those words again.”

He added that it was like “riding a bike,” so it seems Lavoiser had no problem getting back in the soap groove.

As for storyline teasers, it looks like tension is brewing for Belle (Martha Madison) and Philip. Lavoiser suggested that we’ll see the pair dissolve their business partnership. They’ve started a record label, but we really haven’t heard much about it. Philip will insist that they need to go their separate ways and be done with it.

Lavosier confessed that this cold conversation will actually be Philip’s last scene with Belle. Days of Our Lives buzz has been predicting that Shawn (Brandon Beemer) and Belle would exit Salem together after their reunion. Lavosier confirmed that “…they leave town and I find out through other people that they’ve left.” (Shawn will be back later, but we haven’t heard anything firm on a Belle return yet.)

Philip will be hurt by the news of Belle’s departure, but we shouldn’t worry too much. He won’t be grieving for long. A reaction shot or two is probably the extent of Philip’s moping. “Things move fast with these stories sometimes, and there’s not that much time of him being sad,” Lavoiser said. “He does not beat himself against the wall for months.”

That’s because Philip is likely headed into a new love triangle soon. “Well, nothing heals a broken heart like a new love – that’s an old love,” Lavoiser said. Chloe (Nadia Bjorlin) and Philip were high-school sweethearts, so there’s solid history to play around with. Of course, Chloe also seems drawn to Deimos (Vincent Irizarry) at the moment.

We don’t know for sure where DOOL might be taking this, but word has it another paternity puzzle could be coming up. Soaps always love a good “Who’s the daddy?” Days of Our Lives showed Deimos connecting with Parker (Christian Ganiere). Is this a sign that Deimos could be a dad to Chloe’s baby down the road?

Philip missed out on being Parker’s father after a paternity swap and a whole lot of confusion. When that mess was finally sorted out, Daniel (Shawn Christian) was proven to be Parker’s dad. Could Philip get a second chance at a child with Chloe?

If Chloe hooks up with both Deimos and Philip, we might have a guessing game on our hands. Which Kiriakis would you want to be the father? Are you up for a rekindled romance between Chloe and Philip? Should Chloe see where things go with Deimos instead?

We’ll give you updates as we learn more. It sounds like exciting Days scenes are in the works! Let us know what you think in the comments below and don’t forget to check CDL often for the latest Days of Our Lives spoilers, updates and news.